Showing posts from March, 2013
Show all

Looking for the Lord -- An Easter Sermon

Are you looking for the Lord?  Then, “why do you look for the living among the dead?”  Does the story of Jesus end with Good Friday, or is there another chapter to the story?
On that first Easter morning, five women went to the Tomb expecting to find a body.  They brought ointments and spices to finish the burial process, which was interrupted by the coming of the Sabbath.  It would seem that for the disciples hope died with Jesus.  The women weren’t looking for the living among the dead.  They were looking for their now dead teacher.  Hope had given way to despair.  All that remained to do was finish the burial process.
Resurrection wasn’t on their mind when they arrived at the Empty Tomb. The message delivered by the two men who greeted them at the Tomb jogged their memory, but I don’t think they were prepared to truly understand what had occurred.  They may have remembered the words of Jesus, but I don’t think they were jumping joy quite yet.
When they returned to the …
Post a Comment
Read more

A Time of Waiting -- A Holy Saturday Reflection

I was thinking about what I might say this Holy Saturday as I finish preparing my Easter sermon.  Sometimes it takes a flash of inspiration to stir the mind and heart.  So, I was glancing at my twitter feed, and I glanced upon a tweet by Jesuit James Martin.  He had placed a brief meditation of his own on Facebook.  The title looked intriguing -- "We live in Holy Saturday" --  so I checked it out.
Fr. Martin reminds us that much of our lives are spent in waiting, but the question then is -- what is the nature of our waiting?
In the closing paragraphs he writes:
We are called to the wait of the Christian, which is called hope. It is an active waiting; it knows that, even in the worst of situations, even in the darkest times, God is powerfully at work. Even if we can’t see it clearly right now. The disciples’ fear after Good Friday was understandable; but we, who know how the story turned out, who know that Jesus will rise from the dead, who know that God is with us, who know t…
Post a Comment
Read more


Luke paints a picture of an innocent Jesus hanging on a cross in the midst of the guilty.  We’ve already heard the first word, one of forgiveness:  “Father forgive them, for they know not what they do.”  (Luke 23:34).  Now we come to the Second Word, which reaffirms the message of the first:  “Truly I tell you, today you will be with me in Paradise.”
Sometimes we forget, but Jesus wasn’t alone in his suffering on Golgotha.  There are, according to Luke, two others, who, like Jesus hang from crosses.  Like him, they’ve probably been charged with rebellion and sedition.  Crucifixion was generally reserved for these kinds of cases.  Rome liked to use this form of execution as a warning to anyone who might think about causing trouble – and they believed that Jesus must be a trouble maker.
These two men have a conversation with Jesus, but their words differ.  The first man joins in with the crowd who are mocking Jesus as a failed revolutionary. It’s possible that he’s hoping…
6 comments
Read more

Gay Marriage -- for the Love of God

For millions of Christians today is Maundy Thursday.  We will pause this evening to remember the final meal that Jesus shared with his disciples before his arrest and execution on the morrow.  At least according to the Gospel of John, standing at the center of this feast (in John this is a pre-Passover meal not a Passover meal) is the command to love one another.   I’d like to pick up on that command – that mandate (Maundy is an anglicized form of the Latin for mandate) and connect it with the important conversation occurring in this nation this week.
The U.S. Supreme Court has heard two key cases this week.  The first concerned the constitutionality of California’s Prop 8.  Being from California, I have a sense of the political process in that state.  Back in November of 2008, as part of the national election cycle, Californians voted by a narrow majority to overturn a state Supreme Court ruling that overturned a ban on gay marriage.  Prop 8 was later declared invali…
25 comments
Read more

Entering the Age of Resurrection -- A Lectionary Reflection for Easter 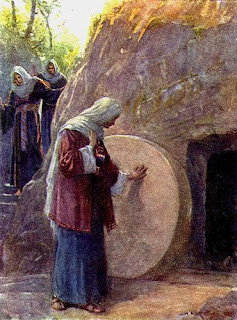 Entering the Age of Resurrection

We are all destined to die.  We may die young or at a very old age.  But the day will come when death takes us from this earth.  There are those who try to evade death’s call, but not even cryogenics can prevent this reality.  Death may be inevitable, and we might not be able to completely wall ourselves off from it, but is death ultimate?  Belief in an afterlife continues to be widespread, even if one cannot provide definitive proof.
At Easter we celebrate the blessed assurance of Christ’s resurrection, which according to Paul is the first fruits of a harvest that leads to the death of death.   Living as we do in a scientifically sophisticated world, there are many reasons to cast doubt on this long held belief in an afterlife.  As David Hume was known to say, where is the evidence that dead people rise? (my paraphrase).   Hume was fond of pointing out that dead people rarely if ever come back …
Post a Comment
Read more

It is the middle of Holy Week.  We look toward the celebration of resurrection that comes with Easter.  As Bruce Epperly reminds us the early Christians found a way of connecting the celebration of resurrection with the rites of spring -- in a pagan observance called Easter.  In this first of three conversations with Phyllis Tickle's latest book Emergence Christianity: What It Is, Where It Is Going, and Why It Matters, he takes up Tickle's point about hyphenated Christianities.  There is a welcoming of the resources of global spiritualities that are enriching the Christian experience.  Since Bruce is one who has not only welcomed this, but led the way, his reflections on celebrating hyphenation should prove informative and full of wisdom.  Since I've not yet read Phyllis' book (it's on my shelf), I am reading these three pieces with interest.
***************
Theologizing with Tickle – Celebrating Hyphenation Bruce G. Epperly
Phyllis Tickle’s Emergence Christianity: Wha…
Post a Comment
Read more

THANK GOD IT'S THURSDAY: Encountering Jesus at the Lord's Table as if for the Last Time.
Nashville:  Abingdon Press, 2013.  X + 110 pages.

By whatever name you know it – Lord’s Supper, Holy Communion, or the Eucharist – Christians have from the very beginning of their existence as a community gathered at the table to share bread and cup.  Our names for this event, we call a sacrament, differ as do our theologies and even practices. Some observances are highly formal and others informal.  Some believe that clergy are needed to make this meal sacred, others do not.  Still, the meal is sacred because it connects us to Jesus.
On the Thursday prior to Easter, many Christians will gather for Maundy Thursday and remember Jesus’ final meal with his disciples.  We call this the Last Supper, and the synoptic gospels, along with Paul, tell us that Jesus instituted this meal of bread and wine as meal of remembrance of a body broken and blood shed.  The Gospel of John also has a final mea…
Post a Comment
Read more

THE MYTH OF PERSECUTION: How Early Christians Invented a Story of Martyrdom.By Candida Moss.  San Francisco:  Harper One, 2013.  308 pages.
Charges fly on a regular basis that President Obama is leading a war on religion, especially Christianity.  Religious groups complain that ObamaCare is a threat to religious liberty.  There is also that annual “War on Christmas,” which involves rules requiring employees to say “Happy Holidays” instead of “Merry Christmas.”  The idea that the religious sympathies of the majority culture are being threatened seems, to many including me, to be a rather ridiculous idea, but it’s a popular sentiment among many.  Much of this persecution complex reflects the fear and disappointment among those who mourn the loss of a Christian hegemony in the West.  They find it difficult to adapt to the new pluralist realities and so lash out at perceived slights.  Many who make these complaints believe that from the beginning Christians have been a persecute…
1 comment
Read more

The Witness of the Stones -- A Palm Sunday Sermon 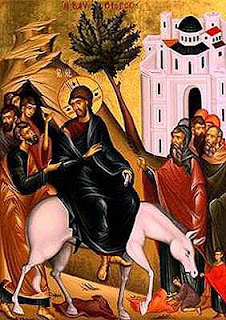 
Concerning the sermon title – this isn’t a sermon about the Rolling Stones!  They may have something to say, but I don’t think it’s connected to Palm Sunday!
When you drive into the church parking lot, do you notice those two gargoyle blocks of stone sitting on the circle?  Do you ever wonder why they’re there?  I think they come from the old church, and they serve as a reminder of our connection to that former place of worship and service.  We don’t talk about those stones, but they do have a story to tell.
Stones might be inanimate objects, but they do tell stories.
When I go to England next fall on my sabbatical, I plan to visit Stonehenge.  That stone structure draws visitors from all over the world, and everyone wonders who built it and why.  These stones have a story to tell, but we must use our imagination to hear it.
Or, what about the stone monuments in Washington, D.C.?  Consider the marble graves of Arlington or the stark black marble of the Vietnam Memo…
Post a Comment
Read more
More posts