Vacation Time -- Presidents, Pastors, all of us! 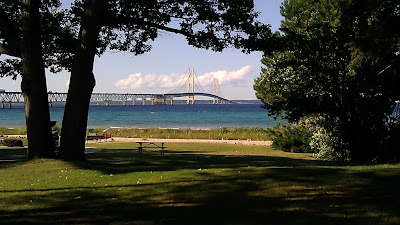 I've been on vacation since Monday.  Cheryl and I spent several days up north in parts of Michigan we'd never seen.  Now I can say that I've been to the UP (Upper Peninsula) and have crossed the famed Mackinack Bridge (the longest suspension bridge in the Western Hemisphere).  We went all the way to Saulte Ste Marie, home of the Soo Locks, which allow ships to transit from Lake Superior to Lake Huron.  Do you know that 20% of the World's fresh water is found in the Great Lakes. 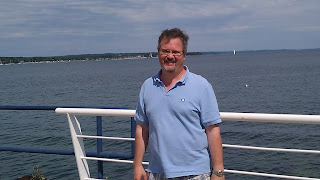 But enough about me.  I want to talk about vacation -- about getting away from things.  For pastors that's not easy -- duty seems to hang over you -- but if you don't take time away, whether for fun or for continuing ed, you lose your focus and your edge.  I know clergy who never take a day off, and when they do, feel guilty.  But  the end result is burn out.  Now, you might say -- but I read your posts the past several days.  Isn't it great that one can schedule posts?   I was also blessed with some guest postings that filled in nicely.  I must also confess that when it comes to writing I don't take my own advice, but then again I like to write.  Still, it was good to spend time away from the computer and the people and just enjoy the beauty of creation.  Hopefully I'll be ready to take on what looks to be a rather active fall!

Now as for the President.  He's getting some flack for taking two weeks of vacation in Martha's Vineyard.  His political opponents, including presidential candidates, are taking him to task.  Why isn't he in Washington dealing with the grave issues of the day?  Well, the President might respond -- because Congress is on vacation, and so I don't have anyone to work with.  Indeed, at least a couple of the candidates are on vacation themselves.  Yes, they're using it for politics, but that's their choice, just like it's my choice to spend vacation time writing!   Besides, I expect the President is working hard even while on vacation.  And for comparison, by this time in their presidencies -- Obama has taken 61 days of vacation (about 2 months out of thirty, a little less than many of us take) -- while George W. Bush had taken 180 days (that's about 6 months out of thirty).  So, don't you think the President needs some time off?   Don't we all need time off.

The past several months have been bruising for the nation and the President.  Perhaps a few days off will help the President get some clarity.  Besides, he has two young children and a spouse who need some attention.

If you're feeling a bit grumpy or your thinking is a bit fuzzy, then perhaps you too need to take some time off.  It doesn't cost all that much to take a walk in the park!!  And if you can't afford Martha's Vineyard, check out northern Michigan!  Quite nice!

Gary said…
I'm happy for Obama to be on vacation. He has no idea how to solve the problems of the country, so he might as well stay on vacation.
12:46 PM

David said…
I already posted this, but Marybeth made me do it again...