Go and Do the Same: Treasure What Matters - A Stewardship Sermon 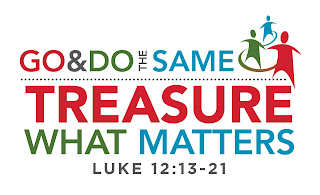 
Money makes the world go around. It’s true that in the world of Star Trek no one seems to need money, unless you’re a Ferengi, but it takes money to navigate through our world. The question is, how much is enough? And, how much is too little? Down through the ages we’ve heard warnings about the dangers of greed. One of the best examples is the story of King Midas, who was given the ability to turn whatever he touched into gold. Unfortunately, that meant his food, and ultimately his daughter. So be careful what you ask for!

During this political season we’ve been hearing messages about taxes, income inequality, stagnant wages, the high cost of health insurance, and much more. Money plays a big role in our political debates, in part because it takes money to fund political campaigns.

In the reading from Luke 12, a person in the crowd listening to Jesus’ message asks Jesus to arbitrate a dispute with his brother over the dispersal of the family estate. Jesus declines the request, but he does offer a warning: “Take care! Be on your guard against all kinds of greed; for one’s life does not consist in the abundance of possessions” (Lk 12:15).

A different message is presented in the movie Wall Street, where Gordon Gekko declares, “The point is ladies and gentlemen that greed, for lack of a better word, is good.”  How would Jesus respond to Gordon Gekko’s message?   This conversation with the man who asks Jesus to arbitrate a family dispute is a small piece of a much longer passage, in which Jesus talks about living in the midst of two ages. There’s the old age, which is marked by greed, suffering, hatred, and violence. Then there’s the new age, an age of peace and justice. The question that gets posed to Jesus comes from the old age, where greed is good. He offers a word from the new age, where justice is good.

This year’s stewardship theme as developed by the “Center for Faith and Giving” is “Go and Do the Same.” That phrase appears in Luke 10:37. Jesus has just shared the parable of the Good Samaritan, and he tells the man who wants to know what’s necessary to experience eternal life that he should follow the example of the Samaritan. Go and do the same by living a life defined by mercy toward others. In this conversation, Jesus tells his audience that if you put your trust in the old age, you will be disappointed. So, instead of being greedy, live a life that is “rich toward God.”

The bulletin insert this morning was written by Ron Allen of Christian Theological Seminary. It’s a meditation on this passage as it relates to our stewardship theme. Ron is a friend of this congregation and to me, and one thing I’ve learned from Ron, is that Jesus’ message about God’s realm offers us a choice. Will we live according to the principles of God’s realm? Or will we cling to the old age? As Ron puts it: “the text for today is a pastoral warning against living according to the assumptions and behaviors of the broken old world with regard to material possessions.”

So Jesus answers the man’s request for help in arbitrating his dispute with his brother with a parable about a rich man who discovered that he had accumulated so many possessions that his barn couldn’t contain them. So what should he do? He could call on the American Pickers to see if they would take them off his hands, and maybe give the proceeds to the poor, or he could build a bigger barn. He decided to build a bigger barn. That way, he could sit back and “eat, drink, and be merry.” Unfortunately for him, the day of judgment arrived much sooner than expected. While he had a bigger barn, and lots of possessions, he wouldn’t get to enjoy them. As they say, you can’t take it with you. The pharaohs tried. They built big pyramids, and filled the chambers with treasure so they could enjoy them in the afterlife. Unfortunately for them, it would be grave robbers and archaeologists who enjoyed the spoils.

When we read the Gospels, we need to think about what’s happening in the communities that received these messages. Why did Luke decide to share this particular story? How did his readers view money and possessions? Did they think that wealth was a sign of God’s blessing, while poverty was a curse? There are passages in scripture that lead to that assumption. There are other passages that suggest that the rich and powerful will fall under judgment. In this particular passage, Jesus doesn’t take either of these views of wealth.  It seems that in this  instance the issue isn’t wealth itself, but what you do with it.  As Ron Allen puts it, for Luke, wealth is a “resource for the care of the community during the delay between the present and the second coming.”

My sense is that none of us think of ourselves as wealthy. None of us has made the list of America’s richest people. None of us can be counted among America’s top 1%. While we might not think of ourselves as wealthy, when look at things from a global perspective, the picture changes. I don’t think any of us would consider an annual income of $75,000 to be anything other than middle class. But, if you put that income level into the GlobalRichList app, you’ll  discover that you would be among the top .11% of the world’s population. That’s rather eye-opening.

What Jesus is concerned about in this passage is greed. He doesn’t agree with Gordon Gekko, that “greed is good.” In Jesus’ mind, greed is a habit of the heart. It’s an insatiable hunger that leads one to desire, as Ron puts it, “a disproportionate share of community resources, especially when some in the community are in need.” Jesus chose not to get into the arbitration business, because he understood that this man wanted more than was necessary.

As we think about our own spiritual lives, how much is enough? If I’m honest, I must admit that at least by global standards, I’m quite wealthy. So, when the community is in need, how will I respond?

When we think about stewardship, the question that emerges concerns the health of the community. When we contribute to the church’s budget, we make possible the work of this congregation. Our contributions, and the contributions of those who helped endow this congregation through their estates, have provided for this building, for staff, and resources for the children. Our gifts to Week of Compassion extend blessings to those in need in the United States and beyond. Our giving to Disciples Mission Fund supports the Region and the ministries of the General Church. In that regard we do pretty well. Recently we received a letter from Sharon Watkins commending us for being among the top 100 congregations in per capita giving to the Disciples Mission Fund. This is important, because these gifts are signs of our covenant relationship with the broader church.

When it comes to stewardship, each of us must prayerfully discern what is required of us. I cannot determine what you should give. The question that we must all wrestle with is whether our hearts, whatever the level of giving might be, are rich toward God.

As I said, Jesus doesn’t condemn the rich man because of his wealth. Instead, he judged the man for choosing to hoard rather than share. Sometimes it’s worth noting how the super rich deal with their resources. There are some rather famous people who have chosen to keep everything for themselves, seeing little reason to share with others. I won’t name names. Then there are those who have chosen to use a significant portion of their wealth to benefit others. Perhaps the best example is the Bill and Melinda Gates Foundation. Bill Gates has made a lot of money, but he and his wife have chosen to use a significant portion of that wealth to tackle issues such as poverty around the world. Are they still wealthy? Yes, they’re still among the wealthiest people in the world, but their hearts seem to be in the right place.

Where is my heart? Do I live within the anxiety of the old order? Or am I willing to trust God and enter the new order, the new age, of God’s realm? That is the question of stewardship—what am I willing to share so that the community might be blessed and that I might be rich toward God?