The Cry for Justice - A Sermon for Pentecost 8C 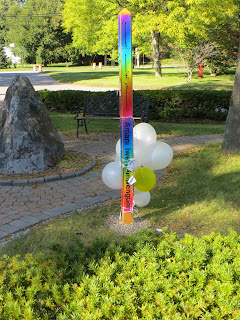 Who are we as a congregation? If we claim to be Disciples of Christ then what does that say about how we live in the world? That is the question that the Preamble to the Design, which we recited earlier in the service seeks to answer. It’s a covenant statement that binds us as a congregation with our brothers and sisters across the region, across the nation, and across the world. It binds us with others who call themselves Disciples, but it also binds us together with all Christians. Indeed, it defines our “mission of witness and service to all people.”  That statement was adopted in the 1960s as the Disciples entered a new phase of life together. There is a briefer statement that was adopted more recently and it goes like this:

“We are Disciples of Christ, a movement for wholeness in a fragmented world. As part of the one body of Christ we welcome all to the Lord’s Table as God has welcomed us.”

In April we officially became an Open and Affirming Congregation. By doing this we committed ourselves to welcoming everyone to the Table, even as God has welcomed us. The Elders wrote an inclusion statement that seeks to answer the question posed to Jesus by a lawyer wanting to know the requirements for gaining eternal life. Jesus answered him with the two great commandments – love God and love your neighbor. The lawyer’s next question is an important one: “Who is my neighbor?” Jesus answered the question with the parable of the Good Samaritan (Luke 10:25-37). We answered it with a list of people who are our neighbors, some of whom might need some reassurance that they’re welcome at the Table.

When the lawyer asked Jesus about the identity of his neighbor, he was asking Jesus what God expected of him. Jesus told a parable. The prophet Micah answered a similar question and offered a principle to guide us.

He has told you, human one, what is good and  what the Lord requires from you: to do justice, embrace faithful love, and walk humbly with your God. (Micah 6:8 CEB).

The prophet calls on us to live justly, to love faithfully, and to walk humbly with God. Psalm 82, which Susan read for us this morning, speaks to the question of justice. It speaks to God’s expectations. It answers the question: Who is my neighbor?

When we began planning this service some weeks ago, we hoped it would be a day of celebration. The journey to becoming an Open and Affirming Congregation hasn’t been easy. For many of us it required rethinking long held beliefs about scripture, about God, and about our neighbors. But we got here, and now it is time to celebrate by covenanting to live together as a gracious and welcoming people who invite all people to share life at Christ’s Table.

Unfortunately life has a tendency to upset our plans, and so we come to the Table with heavy hearts. This past week has been marked by violence in the nation’s streets. First there were the shooting deaths of black men by police officers in Baton Rouge and St. Paul. The deaths of Alton Sterling and Philando Castile once again raised questions about how many police officers view people of color, especially African American men. Then, as we were wrestling with their deaths, we heard about the deaths of five police officers in Dallas, who were ambushed and killed while they protected those who were peacefully protesting. We cry out to God: why, why, must this violence persist? Why can’t we just get along?

It is in this context that we hear the word from Psalm 82. The Psalm begins with God standing in the middle of the divine council. God is surrounded by the “gods” whom the Supreme God had empowered to govern the earth. Unfortunately, these representatives of the Supreme God showed partiality to the wicked. Now they face God’s judgment. They’re even threatened with dying like mortals because they have failed to care for those without knowledge or understanding.

The Psalm itself offers us an interesting look into the theologies of ancient Israel. When this Psalm was written, the Jewish people hadn’t yet become fully monotheistic. They believed there were multiple gods, along with one supreme God. They had addressed their concerns to the chief judge, and now God was executing judgment on the ones who failed to do their job.

The word I hope we hear this morning is that God is committed to justice for the weak and the orphan, for the lowly and the destitute. This is a word we often hear from the prophets. Micah and Amos and Hosea all speak of God’s commitment to those who are in need and challenge those who are wealthy to care for the needs of others. When Jesus answered the lawyer’s question about who was his neighbor, he pointed to the Samaritan, a person whom the lawyer would have found objectionable, and said – do as he did. He is the neighbor.

While God speaks in verses 1-7, it’s the people who step forward in verse 8 and demand of God: “Rise up, O God, judge the earth; for all the nations belong to you!” (Vs. 8). In other words, the buck stops on your desk!  Judge the earth for it belongs to you.

But, what does this Psalm say to us as God’s people? Where do we fit in this story? Could we be counted as among the “gods” who face judgment because we have shown partiality to the wicked? Have we seen injustice occur and have turned away? Could this be a call for us to stand up for justice?

By becoming an Open and Affirming Congregation, and adopting our inclusion statement, we have committed ourselves to becoming people of justice and mercy and compassion and grace. This means standing against racism in our land. It means working toward the elimination of poverty. It means calling for equitable educational systems. It means loving our neighbor by pursuing the common good of all people. That can mean standing against unjust laws. Because those who are Lesbian, Gay, Bisexual, and Transgender, have often been excluded from the Table, we had to make it especially clear that these brothers and sisters are fully welcome at the Table. When we say all means all, we mean all.

People often ask why we needed to do this. I asked the same question many times. And the answer I received is that if you’ve been excluded you won’t know that you’re truly and fully welcomed until an explicit invitation is made. We needed to be clear so that no mixed messages were being sent. That’s why our statement, which we’ll recite in a few moments, is so explicit!

God has called on us to pursue justice, even as we remind God that the buck stops on God’s desk, for “all the nations belong” to God.

Who is my neighbor? My neighbor includes Alton Sterling, Philando Castile, the five officers killed in Dallas, and the nine who were wounded. As hard as it might be to admit, the officers who shot Alton Sterling and Philando Castile, as well as Micah Johnson, are our neighbors. While we want to say that all lives matter, the point of the #BlackLivesMatter movement is that until we recognize that Black Lives Matter, then we can’t move on to all lives matter. The same is true for our LGBT brothers and sisters. Until we recognize that their lives matter, it is difficult to say that all lives matter.

We cry out to God: How long O Lord will this continue? As the church, we can commit ourselves to being agents of a “movement for wholeness in a fragmented world.” We can do this by affirming our Inclusion Statement and by singing with Bill Thomas, a Disciple pastor and a gay man, the words of our  opening song: