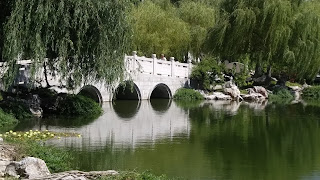 There is violence in the streets (police shoot black men, and then police get shot). Nations are being torn apart (Syria, Turkey). Political systems seem broken (U.S.A.). I'm generally an optimistic person. Yet, I'm troubled by what is happening around me, especially the political rhetoric of the hour. We seem intent on building walls rather than bridges. The Republican Party concluded it's convention last evening, anointing Donald Trump as its nominee. I didn't watch the speech, but I'm not surprised by what has been reported. It expressed clearly a politics of resentment. It was divisive and angry. The message that emerged from that convention was anything but hopeful.

The message we're hearing from some in the political realm is a nationalist one (Americanism not globalism). It's focused on me first. We've heard preachers at the convention, in their prayers, refer to the other major party as the enemy, while another speaker suggested that the presumptive nominee of that party serves Satan.  I'm hoping for better from next week's Democratic Convention, but there could be a lot of angry words coming out of that convention as well. There is a temptation to match anger with anger, to fight fire with fire. Being a registered Democrat, I'm hoping for better, but I am concerned.

As a person of faith who loves the country that he calls home, I want better than what we're getting. I want the people and leaders here in the United States to deal with real issues. We have infrastructure problems. We have skill issues. We have safety issues -- community/police relations could be improved if there was money in community budgets to pay for more police so as to engage in community policing. We have a gun problem as well. We have a rhetoric problem.

Beyond the borders of our nation. I'm concerned about what's happening in Turkey. There is a purge going on that could lead to an authoritarian government being established in this important bridge between Europe and the rest of the Middle East. I've come to known and respect people here in the United States who are affiliated with the Gulen Movement. I'm also concerned about religious minorities, especially Christians, who are being targeted by a nihilistic movement in Syria and Iraq that is using and abusing Islam.  I could go on.

Since I just finished reading Miguel De La Torre's The U.S. Immigration Crisis, I understand better now than before that we must take care of what's going on at the border. The solution isn't a wall or rounding up people. It's creating a humane system that benefits people on both sides of the border. It will take some humility, and yes some repentance on our part as Americans to resolve the problems before us. I guarantee you that Donald Trump doesn't have the answer, and I'm not sure the Democrats are truly ready to deal with this issue. The good news is that there are voices from within the faith community, even among white evangelicals who are beginning to see the light.

Whether you're a fan of globalization or not, we live in a truly global world. What happens in another part of the world affects us in our own communities. Here in Troy, a relatively affluent, predominantly white community, there is an increasingly diverse population. Over 20% of our residents in this city are Asian. They come from India, Pakistan, China, and elsewhere. These are my neighbors. These are my friends. Some are Christian, many are Muslim, Hindu, Sikh. We are enriched by this diversity. If there is any hope to be found, it is in recognizing and embracing this diversity.

It is true that all lives do matter, but if we're to affirm that premise we must first affirm that his "all" includes black lives, brown lives, and yellow lives, as well as the lives of those of us of European extraction! Let us remember as well that Orlando may have had terrorist implications, but it was also an attack on the LGBT community. So let us truly embrace our global identities, so that we might find hope in conflicted times.  Then, when you vote, if you vote, keep in mind the welfare of your neighbor, especially the neighbor who is different from you, and that too will offer hope!
Email Post
Labels: Diversity Donald Trump Globalization hope Immigration Middle East Miguel De La Torre politics Troy Michigan Turkey Violence