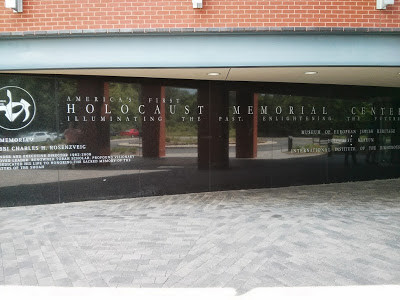 We are now sixty-eight years removed from the end of World War II.  The last of the survivors of the Nazi concentration camps where millions of Jews, Gypsies, homosexuals, the disabled, and anyone else that the Nazis considered not fit to live were incarcerated and/or murdered was liberated.  It has been "long enough" that it's easier to forget that humans are capable of such brutality.  Fortunately there are still those who can tell the story.  They're no longer young, but their stories are powerful.  They continue to bear witness to the message that unfortunately we have yet failed to heed -- "Never Again."  Never again will humans seek to exterminate other humans.

Several years ago I had the privilege of getting to know Judith Meisel, a child survivor from Lithuania, who with her sister were adopted into Catholic families.  The two sisters survived by being sheltered by this family, and later smuggled into Denmark.  Later in life Judith made it her life purpose to tell the story, which fortunately has been preserved through a documentary entitled  Tak for Alt:  Survival of a Human Spirit.     I got to know Judy while serving as Coordinator of the No Place for Hate Campaign for the Santa Barbara ADL.  Judy was one of our primary speakers -- though she would travel across the country telling her story of survival and calling on us to join her in working for justice and peace.

Yesterday (Sunday) I had the opportunity to join a group tour set up by the Troy-area Interfaith Group, which I serve as Convener, on a field trip to the Holocaust Memorial Center in Farmington Hills, Michigan.   This is the oldest free-standing holocaust memorial center in the United States (the current building is less than a decade old).  Ten members of my congregation, including me, joined in the tour, one of whom has family that were lost during the Holocaust.

It was a very moving experience.  We learned something about Judaism, about anti-Semitism, and about how the Holocaust occurred.  We saw pictures, some difficult to take in.  It is an excellent museum, that is well worth the time spent at.  Since I couldn't take pictures I don't have any to share, except of the outside of the building.

But, as moving as the museum tour was, it was the survivor who spoke to us at the end of the tour.  Paula Marks Holton spoke nearly an hour, but she did so in away that moved everyone greatly.  Paula shared her story, how her family was forcibly removed from their home in Poland, moved into the Warsaw Ghetto, and from there her family was separated.  She was the youngest -- only fourteen when the German Army overran Poland.  Over time she would move from one concentration camp to another, including Auschwitz, where she would stand face to face with the notorious Dr. Joseph Mengele.  From there she was moved to Ravensbrook and then deeper into Germany, finally ending up at Bergen Belsen.  She survived in part because the Nazi's found her useful labor.  The one item carried with her, up to her time at Auschwitz, was a small picture of her mother.  She would lose it at Auschwitz, but before it was destroyed, she looked into the eyes of her mother -- in the picture -- and heard her mother encourage her to survive.  And survive she did, to tell us her story.

It was a powerful, moving story.  But more than anything it is Paula's indomitable spirit that showed through. There was great joy in her heart as she called us to be peace makers, to work together to speak out for those on the margins.  After she finished she went around and hugged all of us.  In the morning I had preached a sermon from Luke 7, the story of the Centurion, a story of unexpected faith.  How was I to know that I would meet one whose faith is so strong, so powerful, so moving as I discovered in Paula.    But, I will remember her spirit, and I share it with you.  What spoke so clearly to me was that her stood before me a woman who had suffered greatly.  Of her family only her older brother, who had managed to flee to Russia before the war, had survived.  She was able to come to Detroit because she had extended family here.  Her brother ended up in Israel.  Just the two of them survived.  She has every reason to be bitter, to be angry, to be filled with hate.  And yet, none of that is present.  Yes, I was able to encounter a person of deep and abiding faith in a place I hadn't expected to find it.

May we join Paula in working to create a more peaceful, a more just, more loving world! 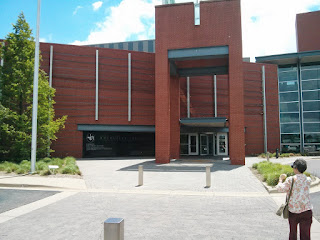