Mission and the Realm of God - Lectionary Reflection for Pentecost 7C 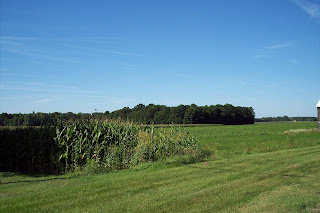 10 After this the Lord appointed seventy others and sent them on ahead of him in pairs to every town and place where he himself intended to go. 2 He said to them, “The harvest is plentiful, but the laborers are few; therefore, ask the Lord of the harvest to send out laborers into his harvest. 3 Go on your way. See, I am sending you out like lambs into the midst of wolves. 4 Carry no purse, no bag, no sandals; and greet no one on the road. 5 Whatever house you enter, first say, ‘Peace to this house!’ 6 And if anyone is there who shares in peace, your peace will rest on that person; but if not, it will return to you. 7 Remain in the same house, eating and drinking whatever they provide, for the laborer deserves to be paid. Do not move about from house to house. 8 Whenever you enter a town and its people welcome you, eat what is set before you; 9 cure the sick who are there, and say to them, ‘The kingdom of God has come near to you.’ 10 But whenever you enter a town and they do not welcome you, go out into its streets and say, 11 ‘Even the dust of your town that clings to our feet, we wipe off in protest against you. Yet know this: the kingdom of God has come near.’

17 The seventy returned with joy, saying, “Lord, in your name even the demons submit to us!” 18 He said to them, “I watched Satan fall from heaven like a flash of lightning. 19 See, I have given you authority to tread on snakes and scorpions, and over all the power of the enemy; and nothing will hurt you. 20 Nevertheless, do not rejoice at this, that the spirits submit to you, but rejoice that your names are written in heaven.”

In the previous reading from Luke, we heard Jesus call forth disciples, people who would leave everything behind and commit themselves to the work of the realm of God. The message Jesus had for his followers, those who would take up the challenge, is not to look back once they put the plow to the earth (Luke 9:51-62). In this reading those who took up the challenge, understanding that Jesus had no place to lay his head (a reminder that this was an itinerant form of mission), have been sent out in pairs to engage in ministry—to proclaim the message of the kingdom in word and deed. According to Luke Jesus sent out seventy people on a mission to the communities he is about to encounter. He had already sent out the twelve on a similar mission (Luke 9:1-6). Now the mission is being expanded. Jesus sends out the seventy disciples as harvesters (remember that they had first been called to the ministry of preparing soil). They’re given instructions as to how to do this. They’re to go out into the world, with nothing on them, except the clothes on their backs. Don’t carry a purse or extra clothing. Travel light. Go to a town and stay in the homes of the residents who are receptive to the message. They’re supposed to stay in one place for as long as they’re present in that community. No moving around from house to house. And as we were told as children, they are told, to eat what is served. Don’t complain. Don’t go looking for a better meal. Be thankful for the hospitality presented to you.

It is important to note the numbers of missionaries sent out. We usually think of Jesus’ company as being the twelve, but here it’s a much larger group of disciples—seventy in all—who are sent out.  Who are these seventy? Where did they come from and where did they go? The report on Pentecost reminds us that the community around Jesus was much larger than just the twelve. So, here we have this larger community of missionaries, whom Jesus sends out to engage in expanding the realm of God. They’re to engage in healing ministry and proclaim the message that the kingdom of God is near at hand. In other words, they’re supposed to do the same things Jesus does in his ministry.

In a Christian world of settled churches and clergy, such a calling may seem rather radical. Yes, the preacher (I’m one) is worthy of payment, but we usually expect a little more than what Jesus seems to be describing.

We may have heard stories of itinerant preachers. On the American frontier, Methodist circuit riders, spread the gospel from community to community on horseback. Francis Asbury is said to have ridden over 270,000 miles on horseback, and early American Methodist leader Peter Cartwright (1785-1872) wrote of their ministry:

"A Methodist preacher, when he felt that God had called him to preach, instead of hunting up a college or Biblical Institute, hunted up a hardy pony, and some traveling apparatus, and with his library always at hand, namely, a Bible, Hymn book, and Discipline, he started, and with a text that never wore out nor grew stale, he cried, 'Behold, the Lamb of God, that taketh away the sin of the world.' In this way he went through storms of wind, hail, snow, and rain; climbed hills and mountains, traversed valleys, plunged through swamps, swollen streams, lay out all night, wet, weary, and hungry, held his horse by the bridle all night, or tied him to a limb, slept with his saddle blanket for a bed, his saddle-bags for a pillow. Often he slept in dirty cabins, ate roasting ears for bread, drank butter-milk for coffee; took deer or bear meat, or wild turkey, for breakfast, dinner, and supper. This was old-fashioned Methodist preacher fare and fortune."

It should be said that the ministry of the circuit rider was brief, but they were effective in planting churches (bringing in the harvest) on the frontier. Centuries earlier, St. Francis of Assisi took much the same approach as Jesus describes here in Luke 10. Francis created an order that required his followers to embrace poverty, and to go out into the world to preach, supporting themselves by begging.

Thus, so equipped with a message (and not much else) the seventy go out and start the harvest. There’s an old revival hymn that sings about “bringing in the sheaves,” such seems to be the calling here. As they reap the harvest of the kingdom, the seventy see great results. The seventy report, upon their return to Jesus, that the demons submit to them. This isn’t just reaping souls for heaven. This is an action that makes known God’s realm. Indeed, Jesus sees Satan falling from heaven. They have authority over snakes and scorpions, which were often understood to be symbols of evil. Ron Allen and Clark Williamson write that “while Satan still exercises power, that ability is temporary, for Satan has been cast out of heaven, the source of ultimate power, and will be destroyed at the apocalypse (v. 18; cf. Isa. 14:11)” [Preaching the Gospels without Blaming the Jews, p. 221]

Satan is defeated, though Satan hasn’t yet conceded. So, what they’re engaged in is “spiritual warfare,” a concept that is often foreign to we who have been influenced by a demythologized and disenchanted worldview. Quite often we reinterpret the biblical story in such a way that Jesus’ work as exorcist is redefined in rather secular terms. We interpret things in political terms, but by “snipping out the devil,” as Richard Beck puts it, we may be missing something. Thus, Beck writes that “exorcism was at the heart of Jesus’ ministry and the focal demonstration of his kingdom proclamation. That people were being set free from the power of the devil was the sign that God’s kingdom had been inaugurated in the person of Jesus. The kingdom of God and exorcism go hand in hand” [Beck, Reviving Old Scratch, p. 32]. What Beck wants to remind us of us that kingdom work involves social justice work, but this work is deeply spiritual. There are spiritual forces at work that need to be tended to. Racism, for instance, expresses itself in injustice, but it has much deeper spiritual roots that need to be confronted. Jesus does that, and his followers, including the seventy, did the same. That being said, with regard to the joy being expressed by the seventy at their ability to cast out demons (just like Jesus), Jesus suggests that they should be content with the knowledge that their names are written in the book of heaven. In other words, this is a call for humility (and not get cocky!).

Stories like these serve to remind us that Jesus was understood to be an apocalyptic preacher. There is no expectation here of settling down and setting up an institution. This isn’t in his purview, because the end was near at hand. They were preparing the way. They were making the paths straight. Just like John the Baptist! We who live in long after the church let go of an expectation that the end was near, must wrestle with its implications. An apocalyptic vision of the kingdom is often world-denying. That is, it keeps us from attending to such matters as protecting the environment or pursuing justice. It can lead to an over emphasis on rescuing the perishing—that is, getting people into heaven. At the same time there are benefits to an apocalyptic view of things. It keeps us on our toes. We can’t get complacent. Satan remains on the prowl, and there is a harvest that still needs to be brought in. Besides, the laborers are few, so let’s get to work!