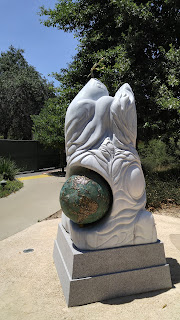 I was on vacation this past week, thus there were new blog posts. When I last sat down to write a posting it was Sunday June 12. I woke up that Sunday morning to news that at least twenty were dead and scores more wounded at a night club in Orlando. By afternoon we were clearer about the who and the where. The victims were mostly gay and lesbian folks who had gathered for an evening of dancing and fun at a well known gay night club. In theory this was supposed to be a safe place to gather for those in the LGBT community. By the time church ended the death toll had risen to fifty, with fifty-three wounded.

As for the perpetrator. He, Omar Mateen, was a Muslim, of Afghan ancestry. Apparently he claimed in phone message to 911 that he was acting in the name of ISIS. So, this was an act of terrorism. ISIS had hit the homeland. Donald Trump reiterated his call for bans on Muslim immigration and travel to America. He crowed that this mass murder had vindicated his vision (except that Mateen was American born and a citizen, not an immigrant).

One can't reflect on the carnage without acknowledging that the weapon of choice was an AR15 semi-automatic rifle with high capacity clip -- the same weapon used at Newtown, Aurora, and elsewhere. Calls for its ban were quick and loud (count me in on the ban).

As the week proceeded, the story became rather complicated. Was this a terrorist attack by a radicalized Islamist committed to the work of ISIS? Was this a hate crime directed at members of the LGBT community? Or both, or something else? We still don't know all the answers. What we have learned are a couple of things. Mateen was never a very devout Muslim. He had a troubled past and had been interviewed by the FBI due to things he had said at work. He wasn't clear about his Islamist sympathies, claiming allegiance to varying groups, both Sunni and Shia related. His ex-wife suggested he was bi-polar and had physically abused him. Then there's this. It seems that Mateen was conflicted about his sexual orientation. He was known to have visited on a regular basis this very gay bar. Was he simply casing it out, or trying to figure out who he was.

So what do we make of this? It seems that we can say that this event was predicated on a mixture of contributors. The perpetrator seems to have been conflicted between his own sense of sexuality and the belief system of his culture/community. Like many conservative Christian communities, Islamic communities tend toward traditional sexual mores. That can cause problems. It appears that Mateen felt isolated and ostracized due to his cultural background. Then there's the mental health aspect. Throw in easily obtained weapons designed for large scale killing, and you have the makings for a mass-killing.

Returning to the victims. They were all members of the LGBT community. That's why they were there. We should also note that the majority of the victims were Latino/a -- primarily Puerto Rican.

It would seem that both the perpetrator and the victims lived on the margins of society. So what should we do, especially if one lives at the center of society? I approach the question from a rather safe place. I am white, male, straight, married. My first response should be one of listening to the voices of those most affected. Upon listening, it is then appropriate to act in partnership with those who sit on the margins. In this case these would include the Muslim community, who face another onslaught of abuse. It also includes those who are LGBT, as well as Latino/a. Throw in the mental health aspect.

At the very least we need to finally take a look at our gun laws, since mass-killings show no signs of abating. Even as we do this, may we be more attentive to the margins?
Email Post
Labels: Gun Laws Gun Violence Hispanic Community Islam LGBT mass killings Mental Health