Staying True to the End - Lectionary Reflection for Pentecost 26C 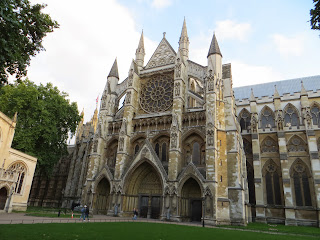 5 Some people were talking about the temple, how it was decorated with beautiful stones and ornaments dedicated to God. Jesus said, 6 “As for the things you are admiring, the time is coming when not even one stone will be left upon another. All will be demolished.”

7 They asked him, “Teacher, when will these things happen? What sign will show that these things are about to happen?”

8 Jesus said, “Watch out that you aren’t deceived. Many will come in my name, saying, ‘I’m the one!’ and ‘It’s time!’ Don’t follow them. 9 When you hear of wars and rebellions, don’t be alarmed. These things must happen first, but the end won’t happen immediately.”

10 Then Jesus said to them, “Nations and kingdoms will fight against each other. 11 There will be great earthquakes and wide-scale food shortages and epidemics. There will also be terrifying sights and great signs in the sky. 12 But before all this occurs, they will take you into custody and harass you because of your faith. They will hand you over to synagogues and prisons, and you will be brought before kings and governors because of my name. 13 This will provide you with an opportunity to testify. 14 Make up your minds not to prepare your defense in advance. 15 I’ll give you words and wisdom that none of your opponents will be able to counter or contradict. 16 You will be betrayed by your parents, brothers and sisters, relatives, and friends. They will execute some of you. 17 Everyone will hate you because of my name. 18 Still, not a hair on your heads will be lost. 19 By holding fast, you will gain your lives.

Stand fast, because the times of trouble are at hand.  Stay true to your faith, because it will get challenged. What a text to hear for the Sunday following one of the most contentious and divisive elections in recent memory. The American people seem at odds with themselves and with their country. There is discord in the world—wars and rumors of wars. Fear dominates our hearts, seemingly stoked everyday by the headlines. Families are affected. Congregations are affected. Could it be that the end is near? How do we as Christians respond? Should we give in to the fear? Is it naïve for us to live with hope instead of fear? By the time we gather for worship on Sunday the election will be decided, but the issues that drive our fears will still be with us, waiting to be stirred again by those seeking power.

By the time that the Gospel of Luke was written (sometime between 80 and 90 CE), Jerusalem had been laid waste by the Roman legions under the command of Titus, son of emperor and future emperor himself. The Jewish revolt of 70 CE had led to massive death and destruction, with the Temple, that grand building that dominated the skyline of Jerusalem burned to the ground. The symbol of Judaism was no more. An increasingly Gentile church found itself separating from it’s the Judaism that gave it birth. Thus, the demise of the Temple was of little concern, except that it seemed to give greater credence to Jesus’ message that God couldn’t be confined to humanly built Temples. Thus, we hear Jesus say to the disciples who marveled at the grandeur of the Temple that “not even one stone will be left upon another. All will be demolished.”

As we listen to this message from Jesus, it doesn’t sound very positive. But with apocalyptic texts you have to dive deep below the surface to catch hold of the message. The apocalyptic looks at the present through the lens of the future. It’s not always pretty, but usually there’s a silver lining. What Jesus audience was hearing was that there would be a difficult future, but stay focused. Stay engaged. Then the Spirit will be able to empower the followers of Jesus so that they might have a word to share with the world.

For the contemporary church, the news is often bad. We watch as our congregations age and decline. Budgets are strained by reduced giving. Newly minted clergy wonder what their future will be, even as clergy who near retirement wonder if their pension plans will be solvent and that they can sustain their positions long enough to reach retirement age. This reality gives us a lens by which we can look at this text.

When Jesus and his disciples were wandering through the Temple precincts, the disciples looked around in awe. The Temple looked solid. It was well-constructed. It was grand. Indeed, if reports are true, Herod’s Temple had been one of the great wonders of the ancient world. It was as much a monument to Herod’s vision of grandeur as it was a place of celebration of God’s presence. Still it would be hard to imagine its destruction.  Having been to places like Westminster Abbey, a church that has existed for more than a millennium, and continues to serve as a place of worship, it’s hard to imagine its demise. Yet, that is what happened to the Temple.  Jesus warned his disciples that a time was coming when this grand building would come tumbling down. Of course, there would be false messiahs that would offer a more positive spin on things. They would come claiming to represent God’s vision, but their promises would prove to be hollow. Indeed, they were simply seeking power and glory, not the will of God.

It is hard not to read this passage in light of the election. I’m aware as I write this that this reflection will appear on the morning of Election Day. Politicians can take on the role of the false messiahs. Some politicians and political candidates, even those with good intentions, will be tempted by the lure of power and glory. Not only that, but they may promise to give us power. Indeed, at least one candidate has promised to give conservative Christians a seat at the table of power. What a temptation it is to want to sit at the right hand of the king. Trading our allegiance to God for a seat at the Table of Power will likely lead to disappointment. So, stay strong. Resist the lure of power.

Apocalyptic literature raises the question of the end of days. Jesus tells the disciples that the coming days might be filled with chaos and even violence. There will be wars and rumors of wars. People will fight over food and water. There will be terrifying signs in the sky (portents). But, that doesn’t mean that the end has come.  In our own history, we have heard from religious folk who claim to have inside knowledge about the future. They have claimed to know the time and place. They’ve read the tea leaves, so to speak, and they invite us to heed their word. William Miller is a good example from the 19th century. He suggested that Jesus was coming back in the 1840s. He gained a rather large following, but that led to disappointment. He tried again, but once again, he couldn’t get it right. Time after time, people have tried to figure it out, but nothing occurs. The end has not yet come. We remain here on earth. The question is—will we remain faithful?

When Luke wrote to the churches he recognized that some in the church had begun to wonder whether Jesus would return. He had to keep them focused. The danger we face is a similar one. When we hear the promises of God, we’re liable to interpret the signs of the times in such a way that we would fall into complacency. Maybe that’s why apocalyptic literature attracts few admirers, except among those who would do damage to the world through their interpretation. We don’t like the frankness of the message. We forget that we live in God’s economy, where hopes and dreams are put in the hands of God not our own hands. It’s easy to forget who we are in God’s economy. We begin to put our hopes and dreams in Temples made with human hands. I have nothing against church buildings. I value our building, but it can easily become an idol that detracts from the mission of God in the world.

So, where do we put our hopes and dreams? Jesus says—put your faith in God and not a hair on your head will perish. Of course, he’s already told us that while standing firm we may end up dead, still, not a hair will perish. What that means is that they can kill the body, but not the spirit. We can stand firm because the Spirit of God is with us, giving us the strength to stand and the words to speak when demanded.

The song we might want to sing is that written by Thomas Dorsey in the depths of despair after the death of his wife in childbirth and the subsequent of the new born child (see the reflection of Nancy Lynne Westfield in Feasting on the Word, C, 4, p. 312). It might also be a good song to sing as we reflect on the future post-2016 election.