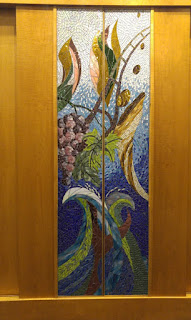 12 Moses said to the Lord, “Look, you’ve been telling me, ‘Lead these people forward.’ But you haven’t told me whom you will send with me. Yet you’ve assured me, ‘I know you by name and think highly of you.’ 13 Now if you do think highly of me, show me your ways so that I may know you and so that you may really approve of me. Remember too that this nation is your people.”

15 Moses replied, “If you won’t go yourself, don’t make us leave here. 16 Because how will anyone know that we have your special approval, both I and your people, unless you go with us? Only that distinguishes us, me and your people, from every other people on the earth.”

17 The Lord said to Moses, “I’ll do exactly what you’ve asked because you have my special approval, and I know you by name.”

19 The Lord said, “I’ll make all my goodness pass in front of you, and I’ll proclaim before you the name, ‘The Lord.’ I will be kind to whomever I wish to be kind, and I will have compassion to whomever I wish to be compassionate.20 But,” the Lord said, “you can’t see my face because no one can see me and live.” 21 The Lord said, “Here is a place near me where you will stand beside the rock. 22 As my glorious presence passes by, I’ll set you in a gap in the rock, and I’ll cover you with my hand until I’ve passed by. 23 Then I’ll take away my hand, and you will see my back, but my face won’t be visible.”

While Moses was up on the mountain conversing with God, Aaron created a golden calf so that the people of Israel could see and touch their God. They felt alone and abandoned and needed something tangible to go before them. They did have a party, but things didn’t go well afterward. God had given a set of rules that forbade the creation of images. They broke the law and it appears that God was ready to destroy the people and start over with a new covenant people.  When Moses went down to check things out, he was carrying the tablets of stone upon which was written the commands. Moses was so horrified, that he dropped the tablets, breaking them. Moses found himself in a difficult position. He had to plead with God not to destroy God’s people, even as he had to regain control of a people who were running wild.

Here they were, out in the desert of Sinai. They had been liberated from slavery in Egypt, but the journey to the Promised Land was proving more difficult than anticipated. This was a stubborn people, a demanding people. God told Moses, I’ll get the people to the Promised Land, but I’m not going to be with them. I’ll keep my promise of liberation, but from then on, they’ll be on their own. Yahweh would no longer be their God. Their cries would go unheeded. The Spirit would no longer move among them. God told Moses that it was time to move on toward the Promised Land. An angel would them, but God would not be with them, lest God’s anger consume the people. This is the prelude for the reading from Exodus 33, the text for the 20th Sunday after Pentecost.

According to the narrator, Moses was in the habit of going into a tent set up outside the camp, where he would conduct conversations with Yahweh. You might call this the Tabernacle. A cloud pillar would appear at the entrance to the tent, and we’re told that Moses would commune with God face to face (Exodus 33:1-12). In the reading for this week, Moses goes into the tent and intercedes with God, requesting God to rescind the decision to remain separate from Israel as they entered the Land. Moses is, understandably concerned about the future of the people, and his leadership, if God decides not to accompany them into the land of Promise. What would the neighbors think? While he can be thankful that God will fulfill the promise to get them to the land, how would they survive in this new land? So, Moses intercedes with God. Remember, Moses tells Yahweh, these are your people! Moses won’t take responsibility on himself that belongs to God. Moses isn’t interested in going forward if God is not with them. Yes, Moses is tired of being caught in the middle. Moses needs some reassurance from God that he’s not alone in this. Could this be a bout of ministerial burnout? Does Moses feel unappreciated by God and by people? Henry Mitchell is probably correct that we need to read this set of interactions with a sense of humor.

Moses wants more signs of God’s presence if he’s going to move forward as leader of God’s people. So, Moses sets some terms for God. Yes, Moses wants to take control of the relationship, and makes some interesting demands on God. Moses makes his plea, reminding God that he (Moses) had found favor in God’s eyes, but Moses isn’t feeling it. He wants more. Moses wants God’s assurance that if they move from Sinai God will go with them, and that God will leave stronger signs. God agrees to his request. God says, “my presence will go with you.” But that doesn’t seem good enough for Moses, who acts as if he hadn’t heard God speak at all. He tells God: “If your presence will not go, do not carry us up from here.” If I read the conversation correctly, God had already agreed to this request, so why make it again?  Moses is trying to pressure God to do what he believes is necessary if this relationship is going to work.

What Moses wants is a truly face-to-face encounter. We’ve already been told that God had been meeting with Moses in the tent face-to-face, though the nature of that encounter isn’t described fully, only that the cloud pillar stood at the entrance of the tent. Of course, we already know that God had provided the tablets of stone with the commandments inscribed. So, what more does Moses want? Henry Mitchell writes that Moses was trying God’s patience with his requests. “Moses apparently had no idea how utterly presumptuous it was for him to suggest an eye-to eye conference with God. Give him a bit of spiritual insight and authority, and Moses is suddenly aspiring to commune with God on equal terms” (Preaching God’sTransforming Justice, p. 447). Fortunately for Moses, God is patient and willing to overlook Moses’ presumption. God simply tells Moses, that God will go with the people, because Moses has received God’s approval.

Moses isn’t finished yet. He demands that God show him God’s glory. He wants more. You get the sense that Moses wants to control the relationship. Is this not true of us as well. Do we not make demands on God that might be presumptuous? Show me your glory. In other words, I want to see you face to face. What you’ve shown me to this point is insufficient. God agrees to show him the glory and goodness of God. The name of God—Yahweh—will be proclaimed. God is willing to go a long way with Moses, but God cannot reveal God’s face to Moses, lest he be consumed. There are somethings that simply cannot be done. Moses has a special relationship with God, but this is not a partnership of equals. I wonder how we read this today? The creation of the golden calf is an expression of this desire to get control of the relationship. We need something tangible to define our relationship. But, if we can see it and touch it, are we not the ones in charge? Is not Moses trying to get control here? Is not God giving him a lot of leash, but the final request goes too far. So, God sets a limit.

Moses requests that he see God’s Glory, that is “God’s awesome, shrouded, magisterial presence, something like an overpowering light. It is in this passage as though the request for glory is to draw even closer, more dangerously, more intimately, to the very core of God’s own presence” [Walter Brueggemann, “Exodus,” NIB, 1:940]. Moses wants to see God face to face. Moses wants to know God intimately, and so do we, but Moses goes too far in this request. That’s because it appears that Moses wants to deal with God on an equal platform. God is willing to affirm a special relationship, but there is a limit. So, God tells Moses, I’ll “make my goodness pass before you, and will proclaim before you the name, the LORD.” As for seeing God’s face, which is what Moses asked for, this is impossible. One cannot see God’s face and live. But, God is willing to let Moses see God’s backside as God passes by. Moses is told that God will place him in the cleft of the rock, and God will cover Moses until God has passed by revealing only God’s back. This will be sufficient for Moses.

What is it like to know God intimately? To experience God’s glory? In this encounter between Moses and God we see God willing to be present in such a way that Moses is transformed. God is willing to go a long way to help Moses prepare for the next step. Yes, God had considered abandoning the people, but in the end, perhaps because of Moses’ persistence God chooses to remain present.  So, the story of God’s covenant of blessing moves forward to the fulfillment of the promise. We live in that promise, as Paul reminds us, seeing “in a mirror, but then we will see face to face” (1Cor. 13:12 NRSV). Yes, perhaps there will come a time when we will see God face to face. For now, it is only in part.