A Disciples Witness - A Sermon 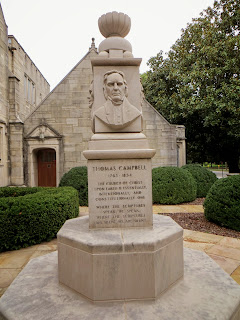 
What does it mean to be a Disciples of Christ Church in Michigan in the 21st Century? Who are we as a people, and what is our witness? I must confess that I am not a lifelong Disciple. My faith journey began in the Episcopal Church and it took a few twists and turns before the Spirit led me to a community of Christians that prizes unity, freedom, and the life of the mind. In the years that I’ve been a Disciple, I’ve come to believe that we have an important witness to share. I’d like to share a few words this morning about our witness as a community of faith. I’ll begin with our witness in unity, and then move to our witness in freedom and covenant.

Although we’re not the only denomination that values unity, the pursuit of Christian unity is deeply embedded in our Disciple DNA. It was this commitment to unity that drew me to the Disciples. This ecumenical ethos has allowed me to integrate my Episcopal, Pentecostal, Baptist, and Presbyterian experiences into a coherent whole.

The Disciple commitment to unity is rooted in the Founders’ experiences of Christianity on the American frontier in the early 19th century. They realized that the religious divisions that people brought with them to the frontier got in the way of the Gospel. Thomas Campbell called the divisions among Christians a “horrid evil” and “anti-Christian.” Barton Stone came to a similar conclusion and embraced unity as his polar star. That sense of calling has fueled the Disciples movement to this day, even if we’ve had our share of divisions. Over the years Disciples have been at the forefront of every major ecumenical venture, including the National Council of Churches, Christian Churches Together, and the Consultation on Church Union. Edgar DeWitt Jones, the founding pastor of the congregation I serve, was deeply involved in ecumenical efforts. He even served as the President of the Federal Council of Churches in the late 1930s.

This pursuit of unity doesn’t require uniformity of belief or practice. The Disciples founders embraced the principle of a simple, reasonable faith that was grounded in one core confession: Jesus is the Christ, the son of the living of God. If Peter’s confession was good enough for Jesus, then it should be good enough for us. That leaves a lot of room for differences of belief and practice. As the old adage goes: “in essentials unity, in nonessentials liberty, in all things love.”

While unity is our polar star, freedom is the driving force of our witness. That freedom is rooted in Jesus’ declaration in John 8: “You will know the truth and the truth will make you free” (Jn. 8:32). Disciples have always believed that Jesus himself is this liberating truth. If you know Jesus, then you’ll be free. He is the center, and if we focus on the center, the boundaries will take care of themselves.

One of the reasons why we embrace freedom, is that we learned a long time ago that faith can’t be coerced. You can pass laws that make people go to church. You can levy taxes to support religion. You can even make a person recite a creed. But, you still can’t coerce faith. It has to be freely chosen. It’s one of the reasons why we have embraced believer baptism, even though we practice open membership.

Our witness to Christ in freedom is probably a reflection of our Disciple origins on the American frontier just a few years after the founding of the American nation. It was a time of religious ferment as the strings of governmental control over religion were severed. Religious groups of all types sprang up. In some ways, spiritual anarchy ruled the day! It was in the midst of this apparent chaos that the Disciples movement was born, bearing witness to a simple Gospel focused on Jesus, and around which they might all unite so that God would be glorified. They understood that unity in freedom was an important missional principle

The Founders believed that Christians should have the freedom to read, interpret, and apply scripture for themselves. They cast off the creeds and religious hierarchies. They encouraged the people to seek after God. And you know what, this movement boomed. It worked because people were hungry for an opportunity to think for themselves about the things of God. Yes, it could be messy at times, but the results were powerful. This why the founders stressed biblical literacy, and Alexander Campbell published guidelines for responsible bible reading. You can’t have both unity and freedom, if you don’t use your freedom responsibly. If we take hold of this freedom principle, then I believe we have a gift to offer the church and the world.

I would like to share four freedoms, which were outlined by Ronald Osborn. Osborn was an important Disciple educator and leader from the 1950s to 1980s. He helped Disciples restructure the church in the 1960s, and even designed our Disciple logo. He laid out these four freedoms in his book titled Experiment in Liberty.

1.  You have the Freedom to Respond to the Gospel.

You get to choose if you want to be a follower of Jesus.  God invites us to enter the realm of God, but God doesn’t choose our fate.

2.  You are  free from creedalism.

There are no tests of fellowship. The only question we ask a person who wants to be baptized or join the church is whether they can make the “Good Confession,” which is the truth that sets us free. I affirm this principle, even though I don’t have a problem reciting the Nicene and Apostles Creeds. They’re helpful tools for understanding the development of the Christian faith over time, but they’re not tests of fellowship!

3.  You are free from ignorance and superstition.

Maybe it was because our Disciple founders were steeped in the writings of Enlightenment thinkers like John Locke, but we have always prized the value of reason. We value the life of the mind. The Founders started schools and colleges, because they believed strongly that you can’t read scripture responsibly if you don’t use your mind.  Alexander Campbell taught people to read the bible like they read any other book. He encouraged his followers to learn from modern science, history, and linguistics. As a President once said, “trust, but verify.”

4.  You are free from the Law of Sin and Death.

As followers of Jesus there is no need to fear death. We don’t live in bondage to the past. Sin may still be present in us and in the world, but that doesn’t mean we’re programmed to sin. Yes, if we’re in Christ, we are free.

Over time, Disciples began to feel like something was missing in our life together. We embraced a simple Christianity centered on Jesus. We embraced unity.  We embraced freedom. That missing piece, however, was the glue that holds us together. When we emphasize freedom and autonomy, then what binds us together?

During the process of restructuring our institutional life in the 1950s and 1960s, Disciples leaders embraced the biblical concept of covenant. Standing at the heart of this covenant theology is a sense of reciprocity and respect. Disciples congregations have a great deal of freedom to govern themselves. They can call pastors, develop worship patterns, and emphasize the theological principles that fit their community. But if we’re going to be family, then we need to be in conversation with each other. We do this through Regions and the General Church. This covenant relationship is a bit like a marriage of equal partners. We commit ourselves to each other, to love and serve God and one another, through sickness and health, till death do us part.

Since an ordination is on the docket for the day, I can say that the process of ordination is a good expression of this covenant relationship. You, as a congregation, have chosen to recommend Steve to be ordained as a minister of the Christian Church (Disciples of Christ). The Region, on behalf of the full Disciples of Christ community, has received your recommendation, and has embraced it. This afternoon, you will host the ordination, but it is the Region that ordains on behalf of the whole church of Jesus Christ. As time passes, the Region holds all of us who are ordained and commissioned ministers accountable to the principles and values of our tradition. So, this afternoon, Eugene James, our Regional Minister, and I, serving as chair of the Commission on Ministry, will speak on behalf of the larger church, giving welcome to Steve as a colleague. Even as we act to ordain, you will receive him as fully ordained and ready to serve as a Disciples pastor for this congregation.

So, what is our witness as Disciples? Is it not that Jesus is the Christ, the son of the living God? Do we not bear witness to this truth as a community of faith that embraces freedom in covenant, so that we might pursue the unity of the Body of Christ, and in that unity bear witness to God’s promise of wholeness for a fragmented world?

N Topliffe said…
Excellent overview of who we Disciples of Christ folk are. Thanks. Sometime I'll fill you in on origin of Disciples Chalice. Osborne was only a part player!
6:58 PM

Robert Cornwall said…
Neil, I look forward to learning more about the origin of the chalice. I must admit that this is somewhat second hand! Perhaps legendary!!
9:12 AM

Dennis Sanders said…
As usual, a great understanding of our heritage. :)
9:47 AM

Ed Dodds said…
Christian Unity Is Our Business By Howard Elmo Short [Disciples of Christ Within the Ecumenical Movement] is on my bookshelf ...
3:19 PM