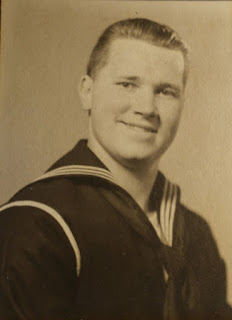 I was asked to offer the invocation and benediction at the Troy Veteran's Day observance held at city hall. This is the third time I have been asked to do this, and the second as a chaplain for the Troy Police Department as well as local pastor. Below is the prayer that I offered. I also share a picture of my father, Robert D. Cornwall, Sr., who served during World War II in the Navy. He was probably only eighteen when the picture was taken. Though I am not a veteran, and I struggle with the question of war, I also believe it appropriate to remember those who have served, whether as volunteers, or as draftees. While I am not a veteran, I am a son and grandson of veterans.

With that, I offer this up as my prayer for the day.

We gather in this place to honor women and men who have served their country with dignity, honor, and courage. We do not come to glorify war or even heroism. We simply gather to recognize those who have shown a willingness to serve in difficult and often dangerous moments, whether they were drafted or volunteered.

As we gather here today, we pray that a spirit of peace will come upon this nation, and all nations, so that young women and men will not be called away from family and friends, and put in harm’s way. We pray that a time will come when, as the prophet declared, nations will beat their swords into plowshares and their spears into pruning hooks.

We honor our veterans, whether they were enlisted or officers, because they gave of themselves for others. Not only do we honor those served in the military, but we also give thanks and honor for families, especially spouses and children, who may have waited with bated breath for news of their loved ones who risked their lives in places far from home.

We know the terrible toll that war can have on the lives of those who serve, so we pray for healing of body and spirit, asking that your grace would wash over them, that they find wholeness in heart if not in body. We pray that those who struggle with life’s difficulties, that they and their families might find hope for the future.

We who love this country, ask that you not let us forget those who served and continue to serve. May their example encourage us in our service to community, country, and world, so that together we might pursue the common good of all creation, here and abroad.         Amen.
Email Post
Labels: peace Prayer Veteran's Day