Is Barton Stone a Eusebian? 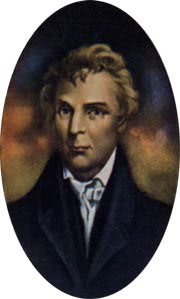 Barton Stone is one of the founding leaders of my denominational tradition. He is known for having a less than orthodox view of the Trinity. In other words, he rejected the concept whole cloth, in part because he found it to be confounding and illogical. How do you have one God in three persons. Not only are the numbers illogical but the idea, in his mind, was not biblical. You won’t find the term Trinity in the Bible. You won’t find an explicit trinitarian formula. So, in the interests of unity and decorum, he rejected the concept that had marked Christian orthodoxy from at least the fourth century.

Stone wasn’t averse to talking about the Trinity and he didn’t make it a test of fellowship, but what he had to say has lead later interpreters to be somewhat confused. Was he an Arian? He definitely believed that the Son was subordinate to the Father (as was also true of the Holy Spirit). He rejected the idea that Christ existed from eternity—only the Father is self-existent. At the same time, he affirmed the divinity of Jesus, speaking of him in terms of being the only begotten of the Father, but not of an equal position with the Father. He has often been charged with being an Arian and a Unitarian, both of which he denied. So, what is he?

If to be an Arian, you must believe that the Son is a creature, then Stone doesn’t qualify. I’m not sure he’s a Socinian either, for he affirms Christ’s pre-existence.

As I was reading, recently, Kelly Carter’s book on The Trinity in the Stone-Campbell Movement, I learned that Stone made frequent reference to the work of Samuel Clarke, an eighteenth-century heterodox Anglican, who was also a friend of Isaac Newton, and both of whom were charged with being Arians, which both denied vociferously. Their friend and colleague, William Whiston (you will know him from his edition of Josephus) gladly admitted to being an Arian, but they rejected that charge. They also rejected the claim that were Socinians or Sabellian (a form of modalism that emerged in the third century).

Remembering that my fellow Fuller Ph.D. graduate, Tom Pfizenmaier, had written his dissertation on Clarke, and had demonstrated that Clarke might be closer to orthodoxy on the Trinity than previously thought, I thought I might do some comparison shopping. What Tom demonstrates in his dissertation/later book is that Samuel Clarke followed a view of the Trinity that has much in common with the Homoiousion party that was led by Eusebius of Caesarea. This view rejected the homoousion view because they feared it led to modalism. That is, to say that Father, Son, and Holy Spirit are of the same substance or essence, might suggest that these are simply modes of being or offices, not realities. So, they offered the homoiousion definition, that the Son shared a “like” substance with the Father, but not the same substance. This view was traced to Origen and Tom argues was held by the Cappadocian Fathers. If Barton Stone follows the lead of Samuel Clarke, and if he is as Tom believes, an adherent of the Eusebian (homoiousion) position, then Stone might also fit into this view, which in the fourth century wasn’t that far from orthodox. As Tom puts it:

The όμοιουσιος position was a vital one, held by most of the bishops at Nicaea, considered within the realm of orthodoxy by Athanasius and fundamental to the theology of the Cappadocians, particularly, Basil the Great. Clarke’s thought represents a re-emergence of the views of Origin, Eusebius of Caesarea, and, in a sense, of the Eastern tradition in general. Clarke was not an Arian, nor an Athanasian, but a Eusebian. [Thomas C. Pfizenmaier, The Trinitarian Theologyof Dr. Samuel Clarke (1675-1729), (Brill, 1997), p. 140.

What I find fascinating here is that we may have been working with too narrow a band of options when trying to understand people like Samuel Clarke and Isaac Newton, but also Barton Stone. I don’t know if Stone would see himself as a homoiousion (like substance), but in his insistence that Christ is not a creature but derives his divine essence from the Father (as the begotten one), then maybe without knowing it, he was closer to orthodox Trinitarian views than he knew. If nothing else, this may suggest a rethinking of how we view Stone and Campbell in terms of their Trinitarianism, something we Disciples often avoid discussing, since we can easily cast it off as a non-biblical human creation.

I really appreciate this post, especially since I myself have struggled with Trinitarian language because it is not necessarily biblical. I’ve also found Stone’s arguments largely convincing.

I’m currently working on a curriculum to teach Stone-Campbell history to a group of Disciples, and Stone’s lack of orthodoxy (and orthodoxy has never been a huge concern for me) will be one of my topics. I am curious what you think of his association with Christian Connexion folks—who were nicknamed Evangelical Unitarians—should his association with them be used (or has it been used) as a lens through which to view Stone’s theology, Christology, and pneumatology?

If my reading of things he might not have been as unorthodox as we've thought. He always denied being a unitarian, which separates him from the Christian Connection. So not sure that's a lens through which to view him.
8:30 PM