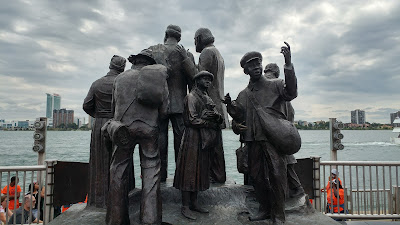 We have been talking once again about racism in America. This time the catalyst was a tweet from Roseanne Barr suggesting that Valerie Jarrett, President Obama's former advisor and friend was the product of the Muslim Brotherhood and the Planet of the Apes.  The reference to the Planet of the Apes suggests that Jarrett, who is African American, is an ape, which has been a common trope to suggest that people from Africa and of African descent are less than human. That is, they are not as far a long on the evolutionary track as Europeans and their descendants. It was used in previous centuries to justify slavery. After all, they weren't really fully human. We even enshrined this belief in the Constitution, counting people who were black as three fifths of a person.

Roseanne's tweet isn't harmless. It is one more expression of a view held by some that white people are by nature superior to others. It is a view enshrined in the principle of manifest destiny. We used it to justify slavery and the encroachment upon the lands belonging to Native Americans. It served to justify the Mexican War and the Spanish American War.

These views are deeply embedded in our culture.But they are not only wrongheaded, but deeply destructive. So how do we move forward? This is where things difficult. At one level, we are all part of one human race. We may look different, but ultimately we are homo sapiens sapiens. At the same time there are differences of culture and ethnicity that help make us who we are. That is a good thing, not a bad thing. The question is how do we allow expression of our differences to flourish without falling into tribalism?

Getting back to Roseanne. Her tweet was despicable. There is no justification; no excuse. Unfortunately, social media has provided a platform where such sentiments can be spread virally. I am not an opponent of social media. I use it regularly. I use twitter and Facebook, as well as this blog to share ideas and to listen for others. I find it a wonderful resource to reach out to others. Unfortunately, what can be used for good can be used for evil. We're seeing these platforms used for evil with increasing regularity. This is in part the product of the view of some that whatever comes to mind can be shared. While our President is adept at such things, he is not the cause. He is but the symptom. Roseanne isn't the cause. She is but a symptom.

What has been revealed through all of this is that racism remains very much with us. It has revealed as well, I fear, a failure to understand the realities faced by people of color on the part of those of us who are known to be white, which, by the way, is a color. The problem is, many who share my color have been led to believe that our color is normative. That is simply not true.

So, once again, we are put in a position to have a conversation that we probably would rather not have, but which is necessary lest we continue to have these episodes. That conversation begins by acknowledging that the kind of statement made by Roseanne, and the thought that is behind it, is simply unacceptable in 2018. The conversation will not be easy. Some of us may feel uncomfortable, but until will acknowledge that Black Lives Matter, Latino/a lives matter, Asian lives matter, as well as European and European American lives matter, we can not truly declare that all lives matter. We cannot say that all lives matter until we who are white have acknowledged our privilege and have divested ourselves of it.
Email Post
Labels: Manifest Destiny Racism Social Media White Privilege