Go the Distance -- Reflection of Gospel for Pentecost 26C 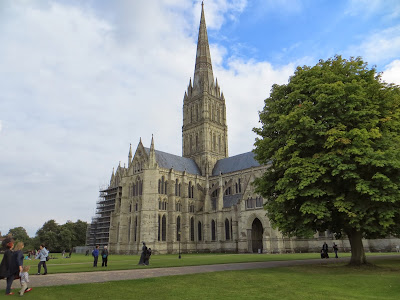 Some people were talking about the temple, how it was decorated with beautiful stones and ornaments dedicated to God. Jesus said, 6 “As for the things you are admiring, the time is coming when not even one stone will be left upon another. All will be demolished.”

7 They asked him, “Teacher, when will these things happen? What sign will show that these things are about to happen?”

Jesus said, “Watch out that you aren’t deceived. Many will come in my name, saying, ‘I’m the one!’ and ‘It’s time!’ Don’t follow them. 9 When you hear of wars and rebellions, don’t be alarmed. These things must happen first, but the end won’t happen immediately.”

Then Jesus said to them, “Nations and kingdoms will fight against each other. 11 There will be great earthquakes and wide-scale food shortages and epidemics. There will also be terrifying sights and great signs in the sky. 12 But before all this occurs, they will take you into custody and harass you because of your faith. They will hand you over to synagogues and prisons, and you will be brought before kings and governors because of my name. 13 This will provide you with an opportunity to testify. 14 Make up your minds not to prepare your defense in advance. 15 I’ll give you words and wisdom that none of your opponents will be able to counter or contradict. 16 You will be betrayed by your parents, brothers and sisters, relatives, and friends. They will execute some of you. 17 Everyone will hate you because of my name. 18 Still, not a hair on your heads will be lost. 19 By holding fast, you will gain your lives.

As a teenager, back in the 1970s, I got caught up in a bit of end-time speculation.  Apocalyptic visions danced in my head (and that of my friends) as we read Hal Lindsey’s Late Great Planet Earth and listened to Larry Norman sing I Wish We’d All Been Ready,  while Barry McGuire’s offered up his earlier anti-war anthem Eve of Destruction for a new audience.  Back then, my friends and I believed that we were living in the “Last Days.” And if Hal Lindsey was correct in his corrections, things should have ended sometime in 1988.  That was twenty-five years ago, so he was a bit off in his figures.

This apocalyptic sensibility has been part of the Christian story from the very beginning.  Jesus came preaching God’s realm, and his followers wanted to know when and where they would see it inaugurated.   Although Jesus spoke of the kingdom being present in their midst, they, like us, wanted something a bit more concrete.  Jesus was, most assuredly, an apocalyptic preacher.  Our earliest records in Paul’s epistles show that the earliest Christians expected a final in-breaking of the kingdom to come right away.    The Gospels also have their apocalyptic moments, and Revelation is a full-blown apocalypse.  While some would like to do away with Revelation, that wouldn’t rid us of apocalyptic visions.  Of course, in time this apocalyptic fervor dies down and institutions develop so that the church can exist for the long haul.  There is the hope of the kingdom, but there is also the need to go the distance.  So, if I’m reading this passage from Luke correctly, what I hear in it is a word of wisdom.  Keep on your toes in expectation of the kingdom, but understand that it may be a while before the realm of God is fully inaugurated.  My sense is that Luke understands that things may take longer to roll out than many of his contemporaries had imagined.  Now, we’re reading this word centuries later, and we’re still living in expectation.

I find it interesting that our passage begins with Jesus engaging in a bit of iconoclastic rejection of the institutional.  Having spent part of my current sabbatical in England exploring cathedrals and parish churches many of which were built a thousand years in the past, I, like the disciples, marveled at the beautiful stones and ornaments that were dedicated to God.  What wonderful monuments to the recognition that we might be here for a while.  Cathedrals weren’t built overnight.  Some took decades and even centuries to construct.  They’ve withstood storms and fires and periods of iconoclastic attempts to reduce their witness.  The Puritans were especially adept at this during the time of Oliver Cromwell.  Perhaps Cromwell and Henry VIII had in mind the words of Jesus when they sought to reduce England’s great cathedrals and shrines to rubble.

In our own day, perhaps we could use this passage to reflect on the role of institutional church. 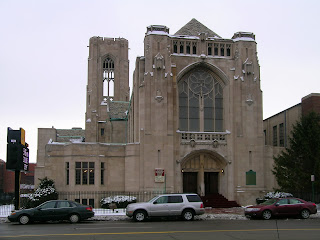 There are many both inside and outside the church, full of apocalyptic fervor, intent on taking down the institutional church one stone at a time.   With declining memberships and finances, we’re left wondering what the future of the church as an institution will be.  The stones no longer seem to cry out as they once did.  The church I now pastor once inhabited a neo-gothic cathedral-style building that sat on a prominent Detroit boulevard.   As was true of other religious bodies inhabiting Detroit in its heyday, he builders of that church believed that this stone edifice would offer an invitation to the community to join in the work of God in the world.  Today, we have a nice building, but no one believes that it speaks with the same voice as that old building did so long ago.

While the disciples had been gazing with awe at the beauty of the Temple, as soon as Jesus began to speak of the realm of God and the destruction of the Temple (remember that Luke writes after the destruction of the Temple so what Jesus is described as saying to the crowd has already happened) the disciples let go of their awe and demand to know when this great apocalyptic event is going to take place.   The stones have now given way to the anti-establishment message of the apocalyptic.

The disciples are saying back and forth, as on a pendulum, and so we see Jesus bring them back to earth.  Jesus isn’t impressed by the stones, but he’s not given to firm dates and places.  Jesus has an apocalyptic message for the people (a message not always popular with liberal Christians), but wants to put out some caveats.  Yes, things might difficult.  It might look like the sky is falling.  You likely will hear self-proclaimed prophets offering the key to discovering the proper time and place.  Surely there’s a “Bible code” that needs unlocking.  While some might find this compelling, Jesus says – don’t be deceived.  Don’t follow them.  They will experience persecution and opposition – with a nod to Candida Moss, we need to remember that claims of persecution are often exaggerated – and there will be earthquakes and wars (and typhoons), but that doesn’t mean the time of judgment has come.  Luke’s Jesus wants to temper this natural apocalyptic ardor just a bit.  He reminds the listener/reader, that our calling isn’t to speculate but to testify.  And don’t worry about preparing beforehand, because I will give you the words to share.  These will be words of wisdom that one’s opponents can’t dispute.  In other words, you don’t have to go and get a Ph.D. in Apologetics in order to bear witness to the Gospel.  Just trust in Jesus and you will have what you need.  Of course, if you’re like me, you may try and hedge a bit here – and even if you don’t get a Ph.D. in Apologetics, you will do a bit of prep work.

The final word is designed to provide the Disciples with a sense of hope in the face of the coming resistance to the Gospel.  You will, Jesus says, face adversity as a disciple.  Some might even be executed.  As I hear this I’m mindful of the fate of brothers and sisters in Christ around the world who are facing adversity and even death.  The churches in Iraq, Syria, and Egypt have been collateral damage of the American war in Iraq and the unrest and civil wars in Egypt and Syria.  Christians have found a way of living and thriving amongst their Muslim neighbors for generations, but now they are caught in the middle of fights they didn’t choose.  Still, Jesus says that not a hair of their heads will be lost.  Obviously, this doesn’t mean – no one will suffer as a result of one’s allegiance to Christ.  But, through all things, Christ is there with us, sharing in our suffering, even as we share in his. 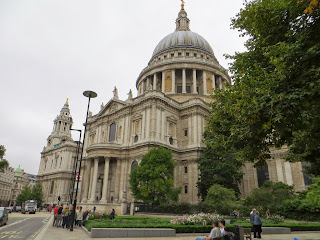 The final verse is the key here – “by holding fast, you will gain your lives.”  The keyword is “perseverance.” The institutions aren't ends in themselves, and yet they may have an important witness to share -- from one generation to another -- even as we keep alert for signs of God's realm breaking into our realities in a new way.    It is not a message of escape.  There is no word here about a pre-tribulation rapture where Christians to watch from their safe perches in heaven as the forces of evil devour what’s left of the world, as a spectator at a gladiatorial match might do.  Instead, we are called to go the distance.  So, perhaps the builders of institutions might not have been completely wrong in their efforts.  Institutions, as Andy Crouch has written, include artifacts, arenas, rules, and roles -- all of which go together to sustain the community for the long haul.  Crouch speaks of the great tragedy of how so many creative leaders within American Christianity are pouring themselves into the creating "forms of church that served just a single generation. . . . Perhaps a new generation of leaders will arise who want to build for posterity, to plant seeds that will take generations to bear fruit, to nurture forms of culture that will be seen as blessings by our children's children.  If we are serious about flourishing, across space and through time, we will be serious about institutions" (Andy Crouch, Playing God: Redeeming the Gift of Power, p. 188).  Whatever comes our way, may we hold tight to the one who is the way!