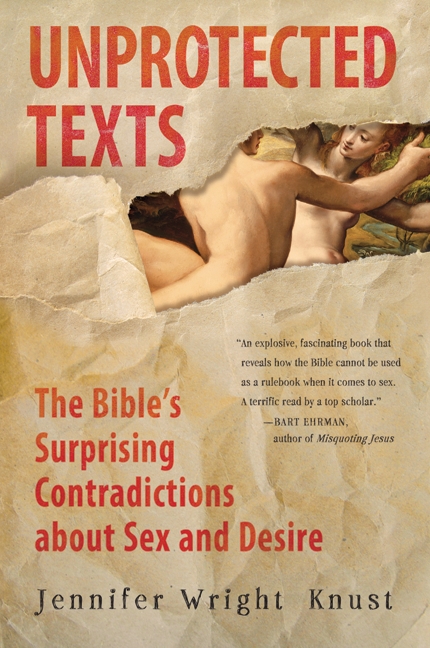 UNPROTECTED TEXTS: The Bible’s Surprising Contradictions about Sex and Desire.

Gary said…
The book's author is looking for loopholes so she can do what she wants. But God does not provide any.

According to the Bible, moral sex is limited to marriage. And marriage is limited to a man and a woman who are qualified to marry each other.
7:27 AM

Anonymous said…
Bob, I appreciate the fact that you give a comprehensive description of this book and a serious evaluation of the author's achievement and shortcoming. It gives me enough information to be appropriately aware of the book even though my reading schedule is not likely to include it any time soon.
8:59 AM

Anonymous said…
Thanks for providing such a thorough review. I think the author's goal was simply to open the topic up for discussion in new ways, and if that's correct than she succeeded. I know what you mean about wanting more conclusions drawn though - I think I'd want to know exactly where the author stand on some of these issues.

Robert Cornwall said…
heathertlc -- Thanks for your comments! I think the author makes pretty clear her position, but in the end she leaves us hanging as to how we might reintegrate the stories into something managable. As a pastor I may have the training to do this, but many of the readers won't have that background. But, if we can have a good conversation about important matters, then this is a useful text!
10:45 AM

Here is a lecture by the author which I listened to last week and really enjoyed.

Anonymous said…
Naomi her mother-in-law said to her, “My daughter, I need to seek some security for you, so that it may be well with you. Now here is our kinsman Boaz, with whose young women you have been working. See, he is winnowing barley tonight at the threshing floor. Now wash and anoint yourself, and put on your best clothes and go down to the threshing floor; but do not make yourself known to the man until he has finished eating and drinking. When he lies down, observe the place where he lies; then, go and uncover his feet and lie down; and he will tell you what to do.” She said to her, “All that you tell me I will do.”

So she went down to the threshing floor and did just as her mother-in-law had instructed her. When Boaz had eaten and drunk, and he was in a contented mood, he went to lie down at the end of the heap of grain. Then she came stealthily and uncovered his feet, and lay down. At midnight the man was startled, and turned over, and there, lying at his feet, was a woman! He said, “Who are you?” And she answered, “I am Ruth, your servant; spread your cloak over your servant, for you are next-of-kin.” He said, “May you be blessed by the LORD, my daughter; this last instance of your loyalty is better than the first; you have not gone after young men, whether poor or rich. And now, my daughter, do not be afraid, I will do for you all that you ask, for all the assembly of my people know that you are a worthy woman. But now, though it is true that I am a near kinsman, there is another kinsman more closely related than I. Remain this night, and in the morning, if he will act as next-of-kin for you, good; let him do it. If he is not willing to act as next-of-kin for you, then, as the LORD lives, I will act as next-of-kin for you. Lie down until the morning.”

So she lay at his feet until morning, but got up before one person could recognize another; for he said, “It must not be known that the woman came to the threshing floor.”

Scott.Gregory00@gmail.com said…
The book does have some strengths and weaknesses. I think the literalists are troubled by how she did a meticulous job outlining what the purpose of marriage was, as opposed to what we believe it to be in the contemporary church. Settling property disputes and the like clearly held sway. on that point, she makes a convincing and sound argument. She also does a good job in regards to showing how sexuality was diverse among the prophets, and that it could hardly be maintained that there was ONE clear standard.

To me, the biggest weakness is her statement that: "Jesus devalues literal family ties to the extent that he would rather his followers ignore the death of a prent than miss the chance to follow him." Clearly, context matters here and Knust only fails to look for that in this instance. Jesus was commenting about the priorities of the people, not that they should give up their family ties. Excellent review on your part, thank you for your honesty and sincerity in looking at both sides of this book.
7:25 PM

tashe' said…
I completely agree with this review. It's exactly how I felt about the book. It was very messy, without any sense of the author following through her thoughts all the way to some sort of conclusion. I know we will never completely find an answer as long as we are alive, it seems like this book didn't really work towards an understanding of what it means to be a sexual being. I was excited to start reading what I thought would be a challenging and insightful book, but I really felt disappointed. As a Christian I feel like I didn't really learn anything about God's nature.
5:37 AM