Ministry and Mission on the Frontiers 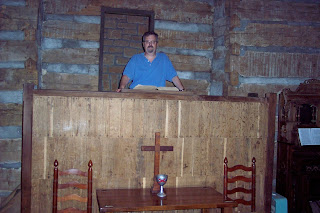 We have been using the term missional of late to describe the way in which the church must engage the world around us if we're going to keep from falling into irrelevance.  This isn't the first time that the church has found itself standing on the frontiers of American life.  At the turn of the nineteenth century, as America moved west, it found itself in a similar situation.  The churches that "succeeded" best were those that were the most flexible and able to adapt to the new situation -- three of those movements were the Methodists, the Baptists, and the emerging Christian/Disciples movement.  These were the churches that embraced the Second Great Awakening.

While attending the Disciples of Christ General Assembly in Nashville I participated in (as part of the leadership team) to Missional Learning Track.  Then, on the way home, we made a pilgrimage to one of the "sacred sites" of the Disciples -- Cane Ridge in Kentucky (see picture of me in the Cane Ridge pulpit).  I'd like to share a bit about Cane Ridge and ask the question -- in what way does it speak to our own time?

Cane Ridge was the site of one of the greatest religious events of the Second Great Awakening in 1801.  Revival had broken out in 1796 in Western Kentucky under the preaching of James McGready, a Scots-Irish Presbyterian and graduate of a log college.  The revival in Logan County lasted from 1797 to 1804.    It reached its apex at Cane Ridge in Bourbon County, Kentucky, in a camp meeting that extended from August 6-12, 1801.  It is estimated that some 10,000 to 25,000 people attended.  The occasion was a traditional Scottish communion service, hosted by a young Presbyterian pastor, Barton Stone.  Scottish Presbyterians usually celebrated the Lord's Supper only once a year and they made it a major event.  The Communion services usually involved several congregations and would be held over an extended period and would usually be accompanied by extended preaching and opportunities for repentance.  The sacramental aspect of this event is usually ignored, but it was a central concern, for participants.

Cane Ridge was only one of fifty Kentucky churches to hold four-day communion services during May to November 1801, but it served as the climax to this season of sacramental revival.  Barton Stone decided to hold a service at Cane Ridge in August, and was one of several communion services and revivals held in the area around Lexington.  People began to arrive at Cane Ridge on Friday, August 6th.  By Saturday the roads leading to Cane Ridge were jammed with people.  The people set up camp in the area around the small church.  Little preparation was taken to provide for the travelers, though some church members provided food and tables but this would have been quite inadequate for the crowds that were gathering.  The first services were held in the meeting house Friday evening, with Presbyterian pastor Matthew Houston preaching.  The planners intended for Saturday to be a day of preparation for the scheduled Communion service Sunday.  While the morning services were fairly quiet, in the afternoon the preaching was continuous and lively.  Most of the preaching was held outdoors, since the meeting house was too small to hold the crowds.  The exuberant preaching led to penitent cries and shouts from the audience.

The communion service was held as planned Sunday Morning in the meeting house.  While Robert Marshall preached outside, Communicants went into the meeting house to receive the elements.  Perhaps 800 to 1100 people took the Lord's Supper.  The communicants would sit at tables set up in the shape of a cross to consume the bread and wine.  It is estimated that there would have been at least eight table settings during the day.  While the service was hosted and led by Presbyterian ministers, many in attendance and even many at the Lord's Table were Methodists.  Thus, the meeting was an ecumenical occasion.  Perhaps eighteen Presbyterian ministers preached or served the Lord's Supper, and perhaps four Methodists also preached, and also at least one black preacher.  While there is no record of Baptist participation it is believed that several Baptists preached as well.  Yet while only ordained ministers were provided with specific slots for preaching, there were many others, perhaps a hundred or more, who served as exhorters.  As the services continued, the distinctions between preachers and exhorters began to blur.  Preachers and exhorters began to speak simultaneously, and many people began to exhibit physical symptoms: running from faintings and the jerks to groans and barking.  Perhaps 300 to 1000 people experienced being "slain," that is falling into something like a coma or in a grand mal seizure.

One minister described the scene as follows:

"Sinners dropping down on every hand, shrieking, groaning, crying for mercy, convoluted; professors [of religion] praying, agonizing, fainting, falling down in distress, for sinners, or in raptures of joy! Some singing, some shouting, clapping their hands, hugging, and even kissing, laughing; others talking to the distressed, to one another, or to opposers of the work, and all this at once -- no spectacle can excite a stronger sensation.  And with what is doing, the darkness of the night, the solemnity of the place and of the occasion, and conscious guilt, all conspire to make terror thrill through every power of the soul, and rouse it to awful attention."

As the confusion began to subvert the preaching people began to meet in small groups for prayer and hymn singing.  This was accompanied by numerous vocal and bodily manifestations.  Though the crowds began to decline after the Sunday apex, the revival continued unabated through Wednesday.  As some left others arrived, adding fuel to the revival fires.

The influence of Cane Ridge went beyond the revival.  While the Presbyterians would eventually reject the camp meeting, Asbury and the Methodists took over the idea of having protracted camp meetings, and made effective use of them.  Stone, along with several of his colleagues, would not remain within the Presbyterian fold for much longer.  Their theological disagreements with the Calvinists caused them to leave their presbyteries and founding the Springfield Presbytery.  Later, after the disbanding of the Springfield Presbytery, Stone came to lead the loosely organized Christians. The latter merged with Alexander Campbell's Disciples in 1832.

The story of Cane Ridge is that mission overcame denominational differences and even changed how churches saw themselves.  I wonder, what we can learn from this story, as we seek to be missional communities in our own age.  Could the missional and emergent movements of today be similar to the movements like the Disciples (Campbells) and the Christians (Barton Stone) in the 19th century.

Too Tall Paul said…
I often wonder how many DoC even know the least bit about Cane Ridge, This campground was a "modern day" Pentecost yet our Brotherhood, at least that is what it was called until we recently formally became a denomination, seems to embarrassed to revisit a time and place that identifies us a First Century Church. I like to tell folks that The Christian Church (Disciples of Christ) was the first non-denominational church.

Perhaps another Visitation will fall upon us (many of us are praying for just that!) and we can once again celebrate our Victory in Christ.

Question- Do you think that the folks at Cane Ridge spent much time debating or voting on social issues or where we should buy our shoes or groceries? See- Luke 12:22-26 (this is red letter stuff)

Thanks for this post brother. I hope that you will post some more pictures as Cane Ridge is still on my bucket list at number three. Right behind The Holy Land and the Royal & Ancient St. Andrews golf Course!
11:32 AM

Brian said…
It is a fascinating event to reflect upon. There were so many social factors at play.

-Uneducated people starving for entertainment.
- Social learning of the barking and being "slayed in the spirit" . In other words, expected norms of behavior.
- The sheer number of people and duration of the event would have a big emotional and behavioral impact.
- People were selling whiskey.

I believe with all my heart that the Holy Spirit was present and active there. God works through community.

Like you guys, it is on my "to do" list. I need to take a picture standing behind that pulpit too!
9:28 PM

Steve K. said…
Bob, thanks for sharing this reflection on the history of the Disciples movement, esp. the story of Cane Ridge, which I'm still interested in learning more about myself. I might have to make a pilgrimage there soon!

As for the analogy of the "emergents" and "missionals" of the latter 20th and early 21st centures to the "Christians" and "Disciples" of the latter 19th century, I'm not quite sure it works, but it's still fascinating to consider. Thanks for throwing it out there for thought and discussion!
2:37 PM