What is Lost in Frontier Ministry? 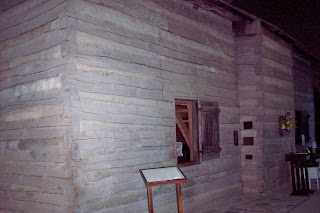 Yesterday I recounted the story of Cane Ridge, one of the key moments that launched the Second Great Awakening on the American Frontier.  The image of the frontier has always appealed to Americans.  In part this is due to this sense of Manifest Destiny, the belief that America was the great vanguard of democracy and civilization.  It was linked to the Post-Millennialism that was popular during the 19th century, wherein it was believed that we were living in the millennial age already and it was just a matter of spreading the word and expanding the borders.  Alexander Campbell, one of the founders of the Disciples imbibed this view, though Barton Stone not so much.  But the point was -- for Americans there was always the frontier.  As for the church, the churches that did best on the frontier were those least encumbered by tradition (and the need for an "educated ministry).  Baptists had their farmer preachers, Methodists their circuit riders, and Disciples had lay preachers (though both Campbell and Stone believed in an educated laity!). 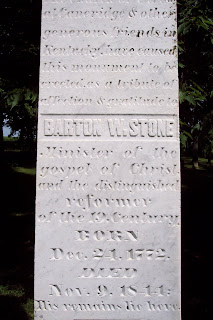 But, ministry on the frontier was not without its difficulties, and that's the point I want to make today -- and the question to be raised.  In our missional learning track at the Disciples General Assembly a quote was shared from Gil Rendle (which I "misremembered" as coming from Brian McLaren -- see comment 1 -- thanks Steve!) made a point that I think needs to be heard and that fits this conversation.  Here is a paraphrase of what I heard:

People don't so much fear or resist change as they fear loss.

We cannot pretend that movement to frontier ministry doesn't imply loss of something.  It might be a loss of security or a loss of deeply held traditions.  I pastor a church that has deeply rooted traditions, some of which are difficult to let go of.  Many churches "go out of business" because they are so committed to maintaining traditions that no longer speak to anyone beyond the walls.  They are, alas, the last ones living in what has become a ghost town.  But the fear of loss prevents one from seeing new vistas.

Now, it needs to be said that as we move out into the frontier, we will continually have to reinvent ourselves.  Even as Americans moved west out on to the frontier, many of the towns and cities they started would become in time ghost towns because the thing that drew them in the first place no longer mattered or existed.  Once the gold ran out, the towns became ghost towns!

So, here's my question.  If we are to embrace a call to ministry on the "frontier," what will we have to let go of?  What will be lost?  And what does that mean for us?  How do we grieve what is lost?
Email Post
Labels: Barton Stone Brian McLaren Cane Ridge Disciples of Christ Frontier Churches Loss Ministry Missional Churches

Steve K. said…
Just to clarify: I don't think Brian ever said this during the Missional Church learning track. It was Sandhya Jha who shared this thought, and she was quoting from Gil Rendle's book "Journey In The Wilderness: New Life for Mainline Churches" (great book, BTW!). And technically, Rendle was quoting Ronald Heifetz and Marty Linsky, who wrote, in their book "Leadership on the Line": "People do not resist change, per se. People resist loss." (see p.107 of "Journey In The Wilderness")

fear/resist, I think it's the same general idea. Change is not the issue. Loss (real or perceived) is the real issue for all of us. We all fear/resist loss and that's really why we fear/resist change.
10:46 AM

Robert Cornwall said…
Thanks Steve! I was quoting this from memory and remembered it was during our track! I will make the adjustments!
11:53 AM