Wrestling till Daybreak -- A sermon 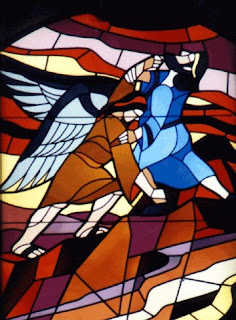 When I was a kid, my mother decided I needed to learn how to defend myself and so she signed me up for wrestling camp.  Although I’d rather have been at basketball camp, for the next six Saturdays I learned to wrestle.  Since I never became a very proficient wrestler, I got knocked out in the first round of the tournament that ended the camp.  Much to my relief!   There’s another kind of wrestling besides the one I learned at camp.  They call it professional wrestling, and in professional wrestling, which I used to watch on Saturday afternoons, neither desire nor proficiency is the key to success.  That’s because the outcome is determined by a script.

When it comes to wrestling Jacob wasn’t a professional!  No, he was a competitive wrestler, who when challenged would fight to win.  He’d been that way since he shared his mother’s womb with his twin brother.  His parents named him Jacob because he grabbed Esau’s heel and tried to pass him in the birth canal.  It didn’t quite work out as Jacob planned, but he didn’t give up.  He got Esau to trade his birthright for a nice bowl of stew and then tricked his father into giving the blessing by pretending to be Esau.  When he went to his uncle’s house looking for a wife, he ended up taking half of Laban’s flocks through trickery.  Jacob was a struggler, who did what he could to get on top of the situation.

Now he’s decided to return home and claim his inheritance.  Unfortunately he hadn’t reconciled with Esau, and it’s been reported that Esau is heading their way with 400 men.  Although Jacob takes some precautions, such as sending tribute ahead of his party and dividing his people and flocks into two companies, fear starts to set in.  The day of reckoning is at hand, and he’s not sure how it will end

Having sent his family across the river, Jacob sits there all alone by the fire, unable to sleep, and worrying about the future.  He prayed that God would remain faithful to the promises made to him, that his descendants would be a blessing to the nations, but he didn’t know for sure what would happen next.

While he was sitting by the fire,  someone attacked him from behind, and a wrestling match began that would last until daybreak.    This wasn’t “professional wrestling” where the ending was already scripted, and so Jacob fought back against his unknown assailant.  When dawn began to break, the attacker pleaded with Jacob:  "let me go because the sun is about to rise.”   Jacob was the winner, but he wouldn’t let go, even when the attacker dislodged his hip from its joint.  He wasn’t going to let go until his attacker gave him a blessing.  That blessing, which he secured by taking up a challenge would change everything.  This blessing involved a name change, and so he went from being the “one who supplants,” to the "one who struggled with God and humans and prevailed."  Yes, Jacob wrestled with God and prevailed, though he would carry a reminder of his struggle – a limp – but his identity was now assured.  Armed with confidence gained through this struggle, Jacob, now Israel, was ready to face his brother.  And the good news is that they would be reconciled!
It’s an interesting story, but there’s more to it than simply a wrestling match with a divine entity.  Like Jacob and Israel, we too have our wrestling matches with God, through which we seek to discern God’s purpose and live it out in our lives and in our congregation.

There are those who believe that God is  like a professional wrestler, and so if we get in a match with God the outcome is already determined.  Because God is in control of our destiny, these wrestling matches have been fixed.   But is this true?  Is our destiny already decided? Is it possible for us to wrestle with God and prevail?  Can our decisions and choices influence and affect the way God is present in the world?  It’s not that God’s character changes, it’s a question of whether the future is open or not.

Like Jacob we all face difficult decisions, and often there are no easy and clean answers, In our struggle to discern God’s direction, we pray and meditate, we read the Scriptures and talk to  friends.  We might even “ask the pastor.”   In many cases we make decisions not knowing how the future will turn out, but in our wrestling matches with God we hear words of blessing and know that God is with us.
There are some who believe that it’s not appropriate to ask questions of God and to have doubts about matters of faith.  Their counsel is to have faith and believe without question.  But Jacob had his doubts and David and Job and Mary had their questions to ask of God, just as we have our questions.  There are times when we have a hard time discerning whether God is present in our time of trial.  We wonder:  If God is love and if God has already determined the present and the future, then why is there so much evil and destruction in our world?  Sometimes our experiences in life cause us to rethink the way we understand the nature and character of God!  Like Jacob, when we wrestle with God, not only do we receive blessings, but we discern a way forward into the future knowing that we’re not alone.

The story of Jacob’s wrestling match seems to have an invitation.  God says: throw your best punch; ask your questions.  If life doesn’t make sense, then tell God your reasons, whether it’s 9-11, Hiroshima, the Holocaust, the death of innocent children, a hurricane, or AIDS.  I think God is ready for a real wrestling match, not one of those “professional” ones where the ending is already determined.

Like Jacob our futures are uncertain.  Some of us face health issues that require difficult decisions.  Others face financial uncertainty, especially if you’re dependent on Social Security and you don’t know if checks will go out this week.  Some of us have theological questions.  We wonder about the character and purpose of God.  Maybe we struggle with a seeming lack of justice in the world or the traditional definitions of God no longer work for us.    As a congregation we face the reality that our demographic is older than the norm and we wonder how to draw in younger adults and children.

These are the kinds of questions and issues that God embraces.  Our God is not a passive spectator.  God is an engaged participant in our lives.  Since God doesn’t act coercively, maybe the wrestling analogy has its limitations.  But, in the struggle, it appears that our lives are transformed by our engagement with God.

On August 27th we’ll have an opportunity to engage God and each other in a conversation about our church, its mission, and its future.  In our all-church retreat that Alex will be leading, we’ll be learning some important skills that will help us work together to accomplish God’s purpose in the world.  In this retreat we’ll be revisiting our core values and we will wrestle with them as we seek to discern our future. Then in September Bruce Epperly is coming to lead us in a conversation about how we might more deeply root our missional work in God’s life. These are important events, because they will help us wrestle with our sense of calling.   Standing before us are important questions like whether we’re ready to nest an intentional Christian community that could lead to a new congregation?   There are issues of diversity in age and ethnicity, and as our General Minister, Sharon Watkins, reminded us at the General Assembly we must  face the question of whether we’re willing to truly welcome our Gay and Lesbian brothers and sisters into  our churches.

So, as a church, we stand at the river’s edge, able to see some of the future unfolding before us, but knowing that the future is not yet complete.  Having wrestled with God, we face the question of whether we’re willing to cross the river with boldness, ready to embrace the future that God is preparing for us.  We’ve already made great strides toward becoming a truly missional church, but this is an ongoing journey, with many rivers to cross and therefore lots of wrestling matches to endure.