The Banquet -- A Review 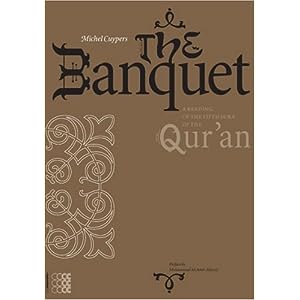 Being interested in the relationship between Islam and Christianity I decided to accept the offer of reading a review copy of The Banquet: A Reading of the Fifth sura of the Qur'an (Rhetorica Semitica)

, which forms a part of the Rhetorica Semitica series of Convivium Press.  The point of this series is to engage Semitic texts, whether biblical or from the Qur’an in terms of their rhetoric.  The belief is that these texts have been “carefully composed” and that when carefully studied they will yield meaning.  This particular book, which focuses on the Fifth Sura of the Qur’an, a chapter of that Islamic Scripture that deals specifically with relations between the emergent Muslim community and both Jews and Christians, has importance for the current situation we find ourselves in.  Christianity and Judaism are linked with Islam, which shares a history and a scriptural and theological tradition.  Each is monotheistic, though the way this monotheism is understood differs (Muslims, like Jews, have a hard time factoring the threeness of the Trinity into their vision of the oneness of God).    It is, however, imperative that we try to understand how we are related, if for no other reason than peace in our age may depend upon it.

This particular book, which is in large part a rhetorical commentary on the Fifth Sura, which takes the name “The Banquet” or “The Table,” was written by a Catholic scholar who specializes in rhetoric and who resided in Iran for a number of years, even earning a doctorate from the University of Teheran (before the fall of the Shah).  Currently he lives in Cairo, where he is a researcher at the Dominican Institute for Eastern Studies, and specializes in the literary study of the Qur’an.

I am not well-versed in rhetorical analysis, so I can’t write with any depth of insight into his analysis of the structure of this important Sura, but he makes it clear that the Sura has a cohesive structure and that if we understand how this text is constructed we can better understand its message.  And the message is a mixed one when it comes to the relationship of Christianity/Judaism and Islam, but there are important factors that can help us understand the relationship better.  One of the key points is the reminder that Islam sees itself in relationship to these other two monotheistic religions.  It is clear as well that Muhammad saw his calling as a completion of the prophetic tradition, which extends from Abraham through Moses and on to Jesus, finally culminating in a final series of revelations to Muhammad.  Indeed, there is present in this Sura an invitation to Christians to find correction to their errors of interpreting the divine order of things.  Thus, the Sura issues an invitation to Christians to convert.  For Christians who believe that Jesus is the culmination of God's message, the idea of conversion should be understandable.  Muslims see their relationship to Christianity in much the same ways as Christians have historically understood its relationship to Judaism.  There is, therefore, respect given to both Christianity and Judaism in this passage of the Qur'an, but with that respect comes a challenge to find the full truth in Islam.

The value of a book like this, whether or not you are able to understand all of the rhetorical analysis is to see the connections between Christianity and Islam, as well as the differences.  One of the things that the author does besides explore the structure of the Sura is to note interscriptural similarities, especially the points at which the Qur’an seems to be quoting from or reworking the Hebrew Bible or the New Testament.  That Muhammad would do such a thing isn’t surprising, since it is a regular practice of the biblical writers.  Both Deuteronomy and the Gospels are regularly used in the Qur’an, as well as texts that are not part of the biblical canon, suggesting that Muhammad was well aware of alternative textual traditions, and chose to embrace those traditions that provided support to his understanding of Jesus and his role in the emergent Islamic faith.

In each of the chapters of the book Cuypers provides his interpretation of the section under consideration.  This was generally the most helpful part of the book for me; as it helped me better understand how Islam understands Christianity and Judaism, and how it sees itself over and against these other traditions.  That Muhammad saw himself as a reformer of Christianity and his message being a completion of the traditions that came before should not surprise us.  Consider how Paul, for instance, makes use of his own Jewish tradition to articulate a new vision of God as revealed in the person of Christ.

The title of the book and the Sura is rooted in the vision present in the chapter of the Qur’an that notes the Apostles’ request that Jesus send down the banquet table from heaven.  There are differences in interpretation and translation of the Arabic “ma’ida,” whether it refers to food or the table, but the author has chosen to use the word banquet, noting the relationship to the gathering at the table.  It is, Cuypers believes, an interpretation of John 6, where Jesus speaks of the bread of life, as well as the Exodus where manna is sent from heaven.  In the Qur’anic context, the vision is one of the descent not of food, but of word (thus taking its cue from John 6), with the Word being not Jesus but the Qur’an.


This isn’t a book for everyone, but if you are interested in wrestling with the Qur’an and its view of the other two Abrahamic traditions – the People of the Book – then this will prove valuable.  The question that Cuypers seeks to raise concerns the way the Qur’an is read.  The author believes that “despite appearances,” the Qur’an “must have a unity and coherence” (p. 47-48)  He believes that rhetorical analysis is the best tool to discern this coherence, and thus precluding the kind of out of context, one verse at a time, reading that is often given to this text – by Muslim and non-Muslim.  He believes that there is importance in doing this as it may take us beyond the text to encounter each other, acknowledging one another as part of the same humanity and coming from the same Creator.
Email Post
Labels: Conversion Islam Koran Koranic interpretation Monotheism Muhammad Muslim-Christian relations Quran Reviews Rhetoric

Unknown said…
Thanks, Bob! Seems to me that peace in our age may depend, not only upon understanding how our beliefs are related to others, but realizing that there is no culmination of divine revelation. I do look forward though, to a "Parousia" which will the arrival (in our consciousness) of "Christ", which is not an individual, but a corporate body, connected by Spirit rather than a belief system. The "Banquet" is a beautiful metaphor for this hope of a universal communion of all life forms.
12:43 PM