Debating the Eucharist -- Marburg and the Bible (Part 2) 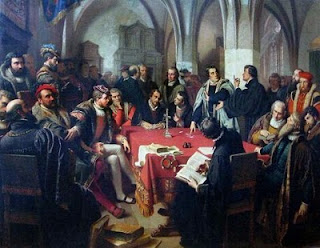 In our continuing conversation about the nature of the Eucharist and the role it plays in Christian theology, I wanted to introduce into our conversation the debate that divided the Reformers.  Their debate had important implications for how the Eucharist came to be understood among Protestants.  Over time Martin Luther and Ulrich Zwingli essentially became the spokespersons for two poles of opinion.  Many followed one or the other, while others, including John Calvin, Martin Bucer, and Thomas Cranmer sought to find a place to rest somewhere in between the two poles.

The debate at Marburg illustrates differences of opinion on how to interpret Scripture, a reminder that even if you believe the Bible to speak the word of God, it has to be interpreted!

So we begin with Luther’s interpretation:

The name that has come to be attached to Luther's understanding of the Eucharist is  "Consubstantiation."  For Luther, the key to the debate was the interpretation of the word's of institution found in the synoptic gospels (Mt. 26:26; Lk. 22:19) and in I Corinthians 11:24.  Luther held to the literal meaning of the word est in the phrase, "This is my body."

When the debate began, it appears that Luther was paired with the Reformed theologian John Oecolampadius, while Zwingli debated Philip Melanchton.  On the second day, however, Zwingli and Luther faced each other.  On this day, before the other participants entered the room, Luther apparently went and wrote in chalk on his table, the words: "Hoc est corpus meum."  The debate went as follows:

"It would be a shame to believe in such an important doctrine, teach, and defend it, and yet be unable or unwilling to cite a single Scripture passage to prove it."

Luther: (taking the cover from the inscription on the table)

"This is my Body!  Here is our Scripture passage.  You have not yet taken it from us, as you set out to do; we need no other.  My dearest lords, since the words of my Lord Jesus Christ stand there, Hoc est corpus meum, I cannot truthfully pass over them, but must confess and believe that the body of Christ is there."   [Timothy George, Theology of the Reformers, (Nashville: Broadman Press, 1988), 150-53].

Zwingli and Luther had disagreed because they approached the text with two very different hermeneutical understandings.  While, Luther affirmed the symbolic nature of the elements, he also believed that the symbol did more than signify the presence of Christ.  Instead, he believed that Christ was, in truth, present in the Eucharist.  The symbol contained that which it symbolized.  While Luther rejected the Catholic understanding of literally eating the body and drinking the blood of Christ, he did believe that in a mysterious way, the Christian partook of Christ's body and blood in the Lord's Supper.  Luther, unlike Zwingli, retained a doctrine of real presence.  Luther rejected the Aristotelian basis of the doctrine of transubstantiation.  Luther rejected the idea that the substance of the bread and wine changed.  There was only one miracle in the Eucharist.  Christ became present "in, with, and under" the elements, but the bread and wine remained present.

Zwingli, on the other hand, insisted that est (is) meant "signified."  Therefore, the Eucharist served to remind Christians of the event of the cross.  To support his figurative understanding of the Eucharist, Zwingli pointed to other passages where Jesus referred to himself as a vine or a door.  For Zwingli the key passage in the debate was John 6:63.  "It is the spirit that gives life, the flesh is of no avail."  Zwingli insisted, against Luther, that since the Spirit imparted salvation immediately there was no need for the "husks of externals."  By distinguishing between body and soul, with the spiritual side being superior to the physical, Zwingli affirmed the primacy of the acts of the Spirit.  While the Spirit brought salvation and nourishment, the flesh brought very little.  One can eat and drink the elements of the Supper as a sign of thanksgiving for a work of grace already completed by the Spirit.

Apparently Zwingli was concerned about idolatry.  Even as he rejected images, the invocation of the saints, and baptismal regeneration, he rejected the idea that the object of Faith could be seen in the bread and cup.  David Steinmetz makes this point quite clearly:

"To insist, as Luther does, that the bread and wine are the body and blood of Christ is to commit idolatry, to ascribe to the creature (namely, bread and wine) the glory that belongs only to the Creator (Romans 1:23)." [David Steinmetz, Luther in Context,   (Bloomington:  Indiana University Press, 1986),  73-76.]