How Great the Joy -- Sermon 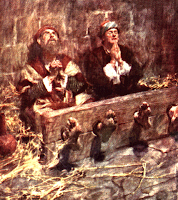 During the Christmas season we sing joyous songs that declare in very explicit terms the nature of our joy, which is:  God has visited us in the person of Jesus, the babe born in Bethlehem.  We sing these songs, even if we’re not feeling particularly joyful at that moment.  We can even sing some of them from memory.  So, we sing:

Joy to the World, the Lord is come!   Let earth receive her king!


Let every heart prepare him room, and heaven and nature sing,

I’m not sure that Paul and Silas were singing “Joy to the World” in their Philippian jail cell, nor would he have been singing it in another prison cell as he wrote his letter to the Philippian church.  That’s because Isaac Watts didn’t write it until 1719.  But, Paul did have this sense about what it means to find joy in difficult situations.

In the first chapter of his letter, Paul expressed his joy at having an opportunity to share the gospel with the whole Imperial Guard (Phil. 1:12).

But not everything brought him joy.  Prison didn’t get him down, but since he drew strength from the prayers of the churches, he does seem distressed at the possibility that strife and dissension might be present in the Philippian church.  And so he writes, asking them to  “Make my joy complete.”

This isn’t the first time I’ve preached on this passage.  Although I don’t have a copy of the sermon, which I wrote out by hand, one of my earliest attempts at preaching took up this text.  It’s always appealed to me because it speaks to my long-held passion for Christian unity.   This passion developed, I think, because my own spiritual journey has taken me to a fairly wide variety of faith traditions, from Episcopalian to Pentecostal, from Covenant to Baptist, from Independent Christian Churches to the Disciples.  This journey is one of the main reasons why I ended up a Disciple.   I took to heart Barton Stone’s slogan that “unity is our polar star.”    We may not live out our calling perfectly, but we believe that it’s a goal worth pursuing.

I think the other reason why I liked this passage is that it offered a nice concise sermon outline, and what more could a novice preacher ask for than a straightforward outline.  And so I preached on Paul’s call to be of the same mind, the same love, united in purpose, and then back to being of one mind.

When we hear a word like this, we might get a bit anxious.  This idea of oneness and sameness may suggest an absence of diversity, but the kind of unity that brings joy to Paul doesn’t eliminate variety and difference, which is a good thing since we’re all rather different in our personalities and perspectives.   But Paul knew that dissension and miscommunication and rivalries can take away our joy, and so he says to us:  Be of the same mind as Jesus, who humbled himself for our sake.  If you follow Jesus, then my joy will be complete.

At our last Council meeting we watched Sharon Watkins’ Re-Election Speech, where she spoke of the challenges facing the church today.  She spoke movingly of those who have not experienced the love of God. She says:

The challenge for us today is that so many of our neighbors do not know the love of God. The need of our neighbor is what needs to break our hearts and preoccupy our board meetings. The people we see on the street every day or on our computer monitors – brother and sister human beings – do not know that they are precious – each and every one – in God’s sight.

She asked us to consider how this message will be shared with those outside the walls of the church if the people inside the walls don’t love each other?  As she spoke of this need, she called to our attention the critique of Christianity offered by comedian and skeptic Bill Maher.  Maher is no friend of the church, but his critique is worth hearing, for he suggests that Jesus has more fans than followers.  The good news, as Sharon noted, was that our very name – “Disciples of Christ” suggests that we are followers not just fans.

To move from being a fan to a follower involves having the mind of Christ, who though in the form of God, thought nothing of this status, and took the form of a servant, even dying on a cross.  Yes, God did exalt him and every knee will bow at his name, but I don’t think that this reward was the reason why he became one of us.

I’m not an advocate of martyrdom or intentionally seeking out suffering.  I’m a rather cautious sort, which is why I don’t indulge in reckless sports such as skiing, whether on land or water!   But, down through the ages, there have been those who have stood firm in the face of suffering, and found joy in the midst of the situations.  This was true of Paul and Dietrich Bonhoeffer, and many others, including people we know so very well, such as Jeans Sims.  These are people who despite their situation in life, found it possible to share the message that their neighbors are precious in God’s sight.

Although I never really watched The Waltons back in the day, the message of that series seems to fit with Paul’s message, for according to the story line, this family, finding itself living in the midst of the Depression and then a World War, found joy in their commitment as a family to pursue the common good of all.

I expect the Philippian church was a lot like modern churches.  It was full of real people – like us.  Like them we have differences of opinion on matters such as politics and theology.  We’re different in age and experience.  But, with all of our differences, and the challenges of working together, we still find joy in the unity that comes as we follow Jesus.  In doing so, we become signs of God’s presence in a world that struggles to find peace, security, economic stability, and hope for the future.  In our lives we declare to the world that there is joy, because the Lord is come!   And we are the witnesses of this good news!