The Bible, Disability, and the Church -- A Review

THE BIBLE, DISABILITY, AND THE CHURCH: A New Vision of the People of God. 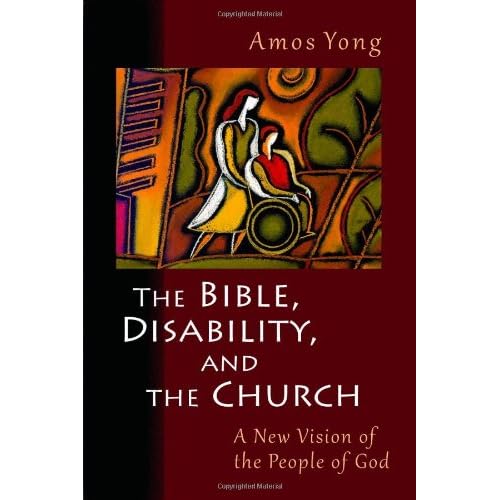 I must admit that until I began reading Amos Yong’s book The Bible, Disability, and the Church I hadn’t thought much about these kinds of questions.  Reading this book was a consciousness-raising experience that forced me to look at biblical texts and the church in a very new and different light.

I became acquainted with Yong’s work as I reviewed Who is the Holy Spirit?  (Paraclete, 2011).  Being that I’m interested in the Holy Spirit, this was a natural book for me to read, and I was impressed by the quality of his theological work.  So, when this book appeared, I requested a review copy to see what a Pentecostal theologian might have to say about this topic.   Although Yong is a Pentecostal teaching at a divinity school sponsored by a famous TV evangelist, his perspective might surprise some readers, especially non-Pentecostals living on the left side of the theological divide.  But whether one is surprised or not by the author’s perspective, the reader will be transformed.

As an evangelical Yong has a high view of scripture.  It is for him the Word of God and thus needs to be taken seriously.  But, he also understands that how we interpret that text has important implications for how we live out the Christian life.  Although as a Pentecostal he believes that God heals, he also knows that God is not healing curing everyone or removing the disabilities experienced by people.  Thus, perhaps there other ways in which healing occurs – including the removal of stigmas that isolate and exclude persons.

His engagement with his brother and others with disabilities led to his reengaging scripture.  We know that there are numerous stories, often healing stories that include persons with disabilities.  According to the Gospels, for instance, Jesus heals the lame, the leper, the epileptic, the hemorrhaging woman, persons who were blind and deaf.  I myself have interpreted these actions as restoring persons to wholeness, but in making this interpretation, have I stigmatized persons with disabilities as being less than whole?   Yong refers to such interpretations as reading the text from a “normate” position.  That is, a perspective on the text from the vantage point of what society considers normal or able-bodied.

But in helping us look at this question of perspective, we need to look at the language we use.  He points out that in our day there are attempts at avoiding discriminatory language.  This we use terms like physically challenged to avoid negative connotations, but he chooses to retain the language of disability, in part because it’s accessible to most church goers, but in doing so we should avoid the “linguistic trap of reducing people to their disabilities.”  But, having said this, disabilities are part of the person.  With that in mind he spends time near the end of the book with how we envision the resurrection body.  Do we assume that these “disabilities” cease to mark the person?  He notes that Down Syndrome is part of who is brother is.  In speaking of disability, he includes a wide spectrum of realities, from physical to intellectual.  The discussion is complex, but Yong approaches it with grace and sensitivity.  His focus is not on why persons have disabilities, but rather on raising our awareness of disabilities so that our churches can be truly inclusive and welcoming.
This is a book written for the church, inviting it to think a new about the question of disability.  It asks us to consider whether disability is some intrinsic evil that needs to be eliminated, either here on earth or in the age to come?   But in writing this word to the church, he focuses his attention on the way we read Scripture.  In the course of four chapters, we move from the Old Testament to the gospels, through the letters, and finally to eschatologically focused texts.

He addresses the holiness codes that stipulated who is considered fit to join the community in worship.  Disabilities are often seen as blemishes and thus prohibitive.  Holding to a high view of scripture he wishes to redeem these texts.  There are, however, other texts, such as the passage describing Jacob’s limp, which is a mark of his spiritual encounter with God and not a blemish, or David’s care for Mephibosheth, the son of Jonathan who has a disability.  There are discussions of Job and prayers and laments found in the Psalms.  What he notes is that we need to move beyond just looking at what the Bible says, and recognize the complexity of perspective that is found in these pages, a complexity that can help us better understand what it means to have a disability and how that affects one’s place in the congregation.

The Gospels and Acts, of course, are full of healing stories, which often involve questions of forgiveness.  He pushes on the idea that healing comes as a result of forgiveness of sins, as if it is sin that leads to disability. From a disability perspective, we need to push back on such ideas.   He also asks the question as to whether physical healing is a prerequisite to discipleship.   But consider the story of the eunuch – he becomes a disciple, but his status as a eunuch isn’t reversed.  Perhaps the most powerful point of this chapter is the conversation about Pentecost.  He reminds us that the “all flesh” receiving the Holy Spirit includes people with disabilities.

From Paul he takes a “theology of weakness.”  He notes Paul’s own confessions about a “thorn in the flesh.”  While we don’t know exactly what this “thorn” was, in some way or another Paul seems to have a disability.  This theology of weakness includes Paul’s discussion of honoring the weaker member.  From this Yong discerns the possibility that the weaker one is essential to the church and due greater honor, and they are equal recipients of the Spirit’s charisms.  Indeed, they are indispensable to the life of the church.

In the final chapter, Yong looks at the issue eschatologically.  He raises the question of disabilities and the resurrection.  Whether or not you believe in a physical resurrection, this is a fascinating discussion because it reflects on how we look at persons with disabilities in the here and now.   If there is no place for disabilities in the new creation does that mean that something about a person’s identity gets lost in the eschaton?   Is such a vision of a “disability-free paradise” ultimately oppressive to persons with disabilities?  Yong answers:  “a disability perspective would insist that some impairments are so identity-constitutive that their removal would involve the obliteration of the person as well” (p. 121).   Examples include dwarfism – Zacchaeus – and Down syndrome.   Even blindness and deafness become for many persons with these disabilities formative of their identities and character.  Will this be lost in the eschaton?

In answering these questions he notes first that in Paul’s discussion of the resurrection bodies (1 Corinthians 15, there is transformation and continuity.  Thus, our sizes and shapes and forms are part of this continuity.  In addition, Yong points our attention to Jesus’ own resurrection body, which according to John’s Gospel retains the wounds from the cross.  Could this be Jesus’ way of entering into the experience of persons with disabilities?   And thus these impairments are redeemed, not removed.

This is a powerful meditation on Scripture.  Even if you don’t read the text the same as the author at every point, you will be transformed by reading it.  It will help form a new perspective on how the church views and welcomes persons with disabilities.  It raises an interesting question as to the way in which we view healing.  In many cases, the healing that’s needed isn’t the physical cure of a person, but a healing of attitudes that stigmatize and ostracize persons with disabilities.    With the intention of addressing negative interpretations of biblical and theological images that are embedded in Jewish and Christian cultures, we are led toward a more redemptive and welcoming interpretation.  The hope is that the church will be transformed, but also the broader culture.

Yong’s attempt to lay out a disability reading of scripture takes its place among other readings of the scripture that seek to liberate those whom society has marginalized.  As is true with feminist and liberationist readings, whether Latin American, Asian, or black theology, it reminds us that context matters and vantage point matters.  Since most readers and interpreters begin with normate readings, it’s important to read the texts anew in the light of the experiences of others.

Since this book is well written, thoughtful and accessible, it should find a ready audience in the church.  Yong doesn’t take an adversarial position, but rather with grace and humility, he invites us to enter the text of scripture and read it with new lenses.  The author honors Scripture, even reveres it, and yet he finds ways deconstructing the way it’s read.  He invites us to experience healing so that we might share in the blessings of fellowship with those we so often consider disabled.  Our efforts are enhanced by the inclusion of discussion/Reflection questions at the end of each chapter.  Therefore, we have the resources to begin the conversation.  Take and read, and be transformed.