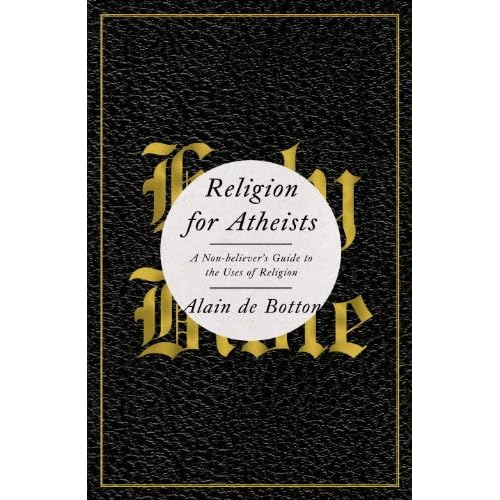 You would think that atheism would be anti-religion, and it often is, but some who consider themselves atheists see value in aspects of religion, even if they can't abide the theological elements.  Martin Marty alerts us to a book by Alain de Botton called Religion for Atheists.  Marty notes that he's not read the book -- thus no review -- but points us to a Wall Street Journal excerpt that lifts up the value of religious meals that help create community, and thus offers an atheist version.  Marty asks the question as to whether such a "religion for everyone" will work.  That is, he asks whether the idiosyncrasies of our religions help define the meal and its rituals, something that can't be reproduced outside the religious dimension.  Take a read, consider the proposal fro de Botton, and Marty's response.  What do you think?
************************

. The ethic of reviewers demands that they will at least have read the book they are critiquing, and I’ve not read or seen more of it than the already numerous articles about it with excerpts or quotes. A review on that basis? Unfair. An alert about the book? Fair.
In the two-page article by de Botton in the weekend Wall Street Journal we read a perceptive highlighting of what’s good about religion and religions. Fair. His analysis of what religion(s) can do when at its (their?) best is likely to get less attention than his projection of what the Journal headlines as “Religion for Everyone.” Communicators who must score by coming up with the novel will find the notion of Religion for Atheists a concept hard to pass up, sure to attract notice, and demanding response. This e-column is itself a sample thereof. Rather than gorge on the promise of this new religion or than sneer at its announcement, we might serve the cause by examining the prospect of de Botton’s vision and prescription.
His main examples of usable functions to be retrieved, replicated, advanced, and celebrated from the old dying religions—his main points draw on Catholicism—have to do with rituals, eating together as in the Mass, forming community, and the like. He pictures value in what he would “build” and advertise as the Agape Restaurant, modeled after the sacramental love-feast (=agape) practiced by early Christians and re-modeled both in the Mass of communal meals of most believing communities.
Now for the look ahead: I’d buy stock in the media which will debate the proposal. But if history is any guide, stock in any sort of “Religion for Everyone” is bearish. “It’s been done!” is a world-weary sigh which we historians are expected to sigh. Of more potential value for faith, non-faith, religion, post-religion, and communities (from local to global) is examining the question of why a “Religion for Everyone” or “A Religion of Atheism” or “The Religion of Humanity” as advanced by major figures like John Stuart Mill and Auguste Comte in early-modern centuries failed so dismally if not disastrously. It may be because they were proposed by Mills and Comtes and not voiced by Muhammad, Moses, and the others. Without suggesting that this is an all-purpose reason, let me plug my favorite analysis, George Santayana’s words in Reason in Religion. A religion for everyone? He writes:

“Any attempt to speak without speaking any particular language is not more hopeless than the attempt to have a religion that shall be no religion in particular. . . . Thus every living and healthy religion has a marked idiosyncrasy. Its power consists in its special and surprising message and in the bias which that revelation gives to life.” Its vistas and mysteries propound “another world to live in,” and “another world to live in. . . is what we mean by having a religion.”

De Botton’s work is a laudable critique of what goes wrong in the old religions, which he seems to envy and about which he is nostalgic. “The religions” could take lessons from some of what he proposes. But it does not transcend the merely secular world, and does not appear to offer “another world to live in.” We’ll watch.
References
Alain de Botton’s, Religion for Atheists: A Non-believer's Guide to the Uses of Religion

----------
This month’s Religion & Culture Web Forum is by Emanuela Zanotti Carney, on Voices of Despair and Gestures of Grief in Rituals of Mourning and Italian Marian Laments in the late Middle Ages. As devotion to Mary as the "mother of sorrows" flourished in the late Middle Ages, poetic narratives of Mary's lamentations at the foot of the cross became an important sub-genre of Marian literature.  Emanuela Zanotti Carney studies Marian laments written in the Italian vernacular, arguing that "poets and compilers ... conveyed the emotional experience of the Virgin at the cross by embodying traditional rituals of mourning performed by women (thecorrotto) into their lyrical and dramatic texts" (2-3).  Seeking an emotional reaction to Mary's grief, these laments "transformed audiences from passive recipients of a sacred story to active and engaged participants in the history of salvation" (32). Read Voices of Despair and Gestures of Grief.
----------
Sightings comes from the Martin Marty Center at the University of Chicago Divinity School.
Email Post
Labels: Agape atheism Eucharist Martin Marty Meals Religion Ritual Seder Sightings

Apostate XP said…
I am an atheist (ex-Catholic apostate) who values a lot of aspects of religion. So much so I'm endeavoring to start an atheistic "religion". It's rather the reverse of the "I love Jesus but hate religion crowd". For me, faith is a problem, but ritual, ceremony, symbols, communal values, sacred and profane etc are all good ideas.