Days of Future Passed (or past?) 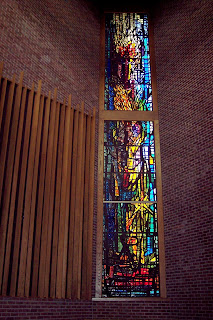 If you're a Moody Blues fan (as I am) the blog title should look familiar.  If you came looking for a post about this innovative group that should be in the Rock and Roll Hall of Fame, I hope that is sufficient reference.

What I want to reflect on in this post the past-future dialectic of the journey of faith.  I am finishing out my three month sabbatical with a stop at the #AARSBL in Baltimore.  For the past three months I've been reading and contemplating the relationship of where we've come from as church and as individuals, and where this leads.  My thoughts have been driven by the realities faced by churches whose history goes back decades if not centuries.  Worshiping as I did in England at Christ Church Cathedral (Oxford) and St. Paul's London brought this into focus.  There is history.  There is continuity.  There is also change.  In reading Andy Crouch's book    Playing God (IVP, 2013), I found an intriguing discussion of the importance of institutions in passing on the faith from generation to generation.  The problem with institutions is that they can become overly focused on maintenance, on self-preservation, and thus they ossify and fossilize.

As I look forward to my return to my vocation as pastor of Central Woodward Christian Church, a congregation whose history goes back into the 1920s with the current identity and further back with other identities (there was a merger of congregations in 1927), I've been pondering how our future is related to our past.  I've been wondering how the past influences the future -- where is there continuity and where is there change?

On Saturday, at the AAR meeting I attended a rather interesting session exploring the emergent church phenomenon.  It was rather lively -- as one would expect of such conversations.  But as I was listening to the presentations about a movement with which I have an affinity (though not necessarily an allegiance), I found myself struggling with the ways in which the emergent conversation can discount the value of institution to the passing on of the faith from generation to generation.

In my use of the album title from the Moody Blues, I want to suggest that the way into the future is to keep a dialogue going between what has been and what will be.  The question of authority arises in such a conversation.  How does one discern the way forward?  What are the touch stones?  I would answer Scripture as one.  But Tradition (not to be confused with traditionalism) being another.  There was a reason that creeds and rules of faith emerged as time passed after Pentecost.

Let us not get stuck in the past, but let us not forget the saints who from their labors rest.
Email Post
Labels: 2008 Presidential Election AARSBL Central Woodward Christian Church Emergent Church Institutionalization Sabbatical Tradition
Location: Baltimore, MD, USA