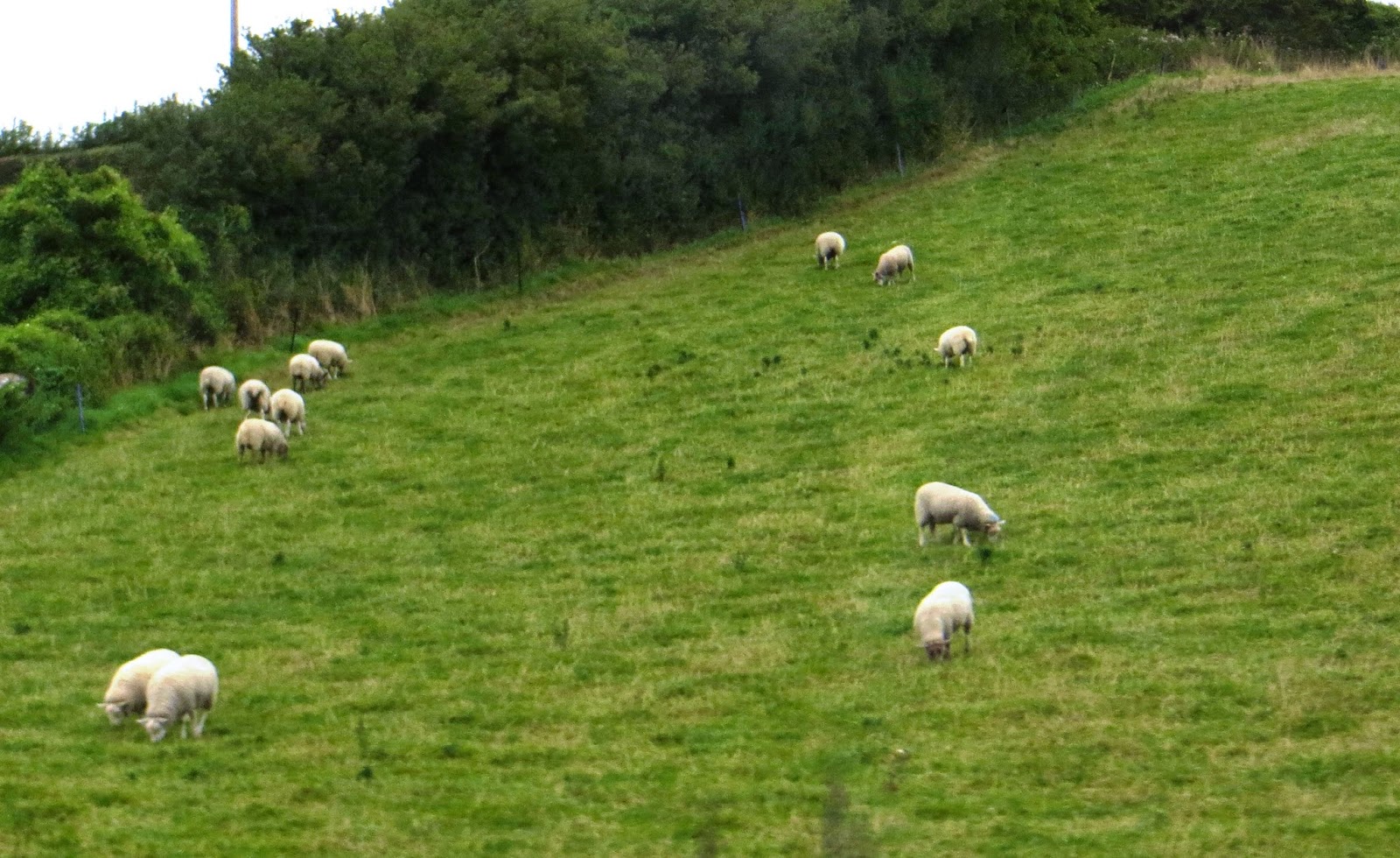 The reading this morning probably could have begun with verse 18:

Slaves, accept the authority of your masters with all deference, not only those who are kind and gentle but also those who are harsh.

You can understand why the creators of the lectionary omitted this verse. I doubt any of us approve of slavery, but back in the first century a sizable portion of the Roman population were slaves.  So it makes sense that Peter would write to Christians who’d been enslaved and advise them to keep a low profile and do what they were told. If they experienced suffering, then they should look to Jesus who also suffered.  Even though he suffered, he did so for the right reasons.

Although none of us are slaves, slavery continues to exist even in Michigan.  We call it human trafficking, and its one of the issues that the MCC is working on.  We’re working to assist victims and bring perpetrators to justice. Because the contexts are different, we’re not encouraging the victims of human trafficking to endure their suffering.  We’re working to put an end to it.

One of the questions I try to ask of a passage like this is: What word from God can we hear in this passage?

Peter talks about suffering, justice, and the shepherd of our souls.  He draws on Isaiah 53 to interpret Jesus’ sufferings on the cross.  According to Peter, even though he was without sin, he suffered the consequences of our sins.  How he did this is a matter of great debate within the Christian community, and so we’ll have to leave the issue of what theory of atonement best represents the biblical story to another time and place.

But, what does Jesus’ example of suffering say to us as we try to live the Christian life in a world where suffering for what is right is a possibility?  Sometimes when we stand up for what is good and right – we suffer injury, receive threats, lose friends, and sometimes churches lose members.

The community that received this letter lived on the margins of Roman society.  Many were poor.  Many were slaves.  And if you lived among the elite, you might get cast out.  It wasn’t easy being a Christian back then.  There were no legal protections.  There were no rewards awaiting you.  So, it’s no wonder that Peter told Christian slaves to mind their ways.

Of course, the Roman Empire wasn’t Christian, so we shouldn’t have expected it to operate according to Christian principles.  But how did Constantine’s decision to legalize Christianity and give it most favored status affect the church?   We’ve given a name to what happened – we call it Christendom.  In many ways the church traded persecution for subservience to the state.

Although our nation’s founders rejected state establishment of churches, a form of civil religion developed that favored Protestant Christianity.  This unofficial status quo continued on until it began to evaporate in the 1960s.  Since then, even though we still don’t really suffer for our faith, it’s not as convenient to be a Christian as it once was.

Many observers have noticed similarities between the world in which early Christianity emerged, and our present post-Christendom age. In many ways being Christian is counter-cultural.  You might even say that we’re “strangers in a strange land.”

Although I can still get a meeting with the local mayor, and even get him to listen to me, when push comes to shove my voice is simply one among many.  And usually the loudest voice gets the most attention.

We may not have the same social status as we did a generation or two back, but we can still share a prophetic voice with the community.  We can still work to bring healing and hope to our communities.  That’s what Jesus did in his ministry, when he stood up for those who were being pushed to the margins of society and brought healing to those who suffered.

Of course, Jesus also stepped on quite a few toes, and in the end he paid the price on the cross.   What Peter does here is ask us if we’re willing to follow the example of Jesus and pay the price of standing up for what is right and what is good.

One way in which can do this is to build an alternative community that lives out Jesus’ vision of the realm of God.  This involves recognizing that while we live in the world, we are not of the world.  As Paul put it – we shouldn’t be conformed to this world, but instead we should be transformed by the renewing of our minds (Romans 12:2).  Paul also wrote to the Corinthians and told them that since they had been reconciled to God and to one another in Christ, they should take up the ministry of reconciliation – a ministry that has both vertical and horizontal dimensions (2 Corinthians 5:18-20).  Some people call these two dimensions evangelism and social concern.  I just call it the gospel of reconciliation.

So how do we create this alternative community?  What does it look like to live in the world, but not be of the world?   One Second Century Christian leader put it this way.  Speaking of his Christian brothers and sisters, he wrote:

They live in their own countries, but only as aliens. They have a share in everything as citizens, and endure everything as foreigners. Every foreign land is their fatherland, and yet for them every fatherland is a foreign land. [Epistle of Diognetus, in C. C. Richardson, Early Christian Fathers - Enhanced Version, (Kindle Locations 4976-4978).]

We may be citizens of this country, but we’re also aliens.  That’s because our first allegiance belongs to God and not country.  When we say the Lord’s Prayer each Sunday, we’re offering our pledge of allegiance to God and God’s realm.  We do this when we pray – “let your kingdom come, your will be done, on earth as it is in heaven!”

While we share life in all its fullness with our neighbors, there should be differences in the way we live that life.  If we do this – if we conform our lives to the Gospel, then life might not always be easy for us.  Though I prefer to have people think that I’m just a normal guy – when we don’t conform to the world’s standards of behavior, then we might seem a bit odd!

The path set before us isn’t an easy one, but we don’t go it alone.  And even if we go astray, we have the promise that the Good Shepherd will welcome us back into the fold.  This shepherd, according to Peter, is the guardian of our souls.

Consider with me for a moment the words of Psalm 23.  Remember how the shepherd leads the sheep “through the valley of the shadow of death?”  When the sheep follow this shepherd, whom they trust implicitly, because they know his voice, they “shall fear no evil, for thou art with them.”

This is, of course, Mother’s Day.  As a child, I learned to put my trust in my mother, who was always there for me.  In fact, she’s still there for me – even when she doesn’t agree with me or I with her!

As a follower of Jesus and a child of the living God, I can put my trust in the Good Shepherd who will be there for me.  Or as we read in the Gospel of John, Jesus says to his disciples:

2 The one who enters through the gate is the shepherd of the sheep. 3 The guard at the gate opens the gate for him, and the sheep listen to his voice. He calls his own sheep by name and leads them out. 4 Whenever he has gathered all of his sheep, he goes before them and they follow him, because they know his voice. 5They won’t follow a stranger but will run away because they don’t know the stranger’s voice.  (John 10:2-5)

We can endure suffering with grace when facing injustice, if we put our trust in the Good Shepherd who has laid his life down for the sheep.  He is, of course, not only the shepherd, he is also the Lamb of God who bore the sins of the world on the cross.  He took our injustice upon himself and transformed it, so that we might be healed.  We may have gone astray, but like the Prodigal’s father, he is there to welcome us back.   And as our opening hymn puts it:

The care the eagle gives her young, safe in her lofty nest, is like the tender love of God for us made manifest. (Deane Postlethwaite, Chalice Hymnal 76)