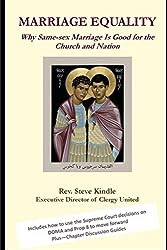 As an addendum to my earlier post on the debate over Marriage Equality in Michigan, in which a recent judicial ruling overturned Michigan's gay marriage ban on Constitutional grounds, my friend and Disciple colleague, the Rev. Steve Kindle, offers a guest perspective.  His posting focuses on a recent ruling in Utah, while mine is focused on Michigan.  As a backdrop, here is the Michigan story.  The Attorney General of Michigan, Bill Schuette, is arguing that the will of the people is supreme (taking heart in a recent affirmative action case ruling by the Supreme Court), and therefore the ban should continue to be enforced.  He gained support from a significant coalition of religious groups recently, including the Roman Catholic Church and local African American ministers.

It is said that the last refuge of scoundrels is patriotism.  Today, it is hiding behind the thin veil of sanctimony disguised as "the will of the people."  Whenever the majority votes to deny certain minorities the rights the majority enjoys, it's always "the will of the people." This solemnly uttered bit of piety is found in abundance whenever a state amendment against gay marriage is overturned by a court. It hit its highest decibel when the U.S. Supreme Court overturned California's Prop 8. Some people need to be informed that America is not a simple democracy; it is a Constitutional Republic.  That means that no matter what the majority wants, it cannot be granted if it oppresses the minority. That is, in large measure, what our constitution is for.

So when a federal judge struck down Utah's same-sex marriage ban, outraged local officials trotted out the canard that "the will of the people" had once again been overturned. It should be noted that when the 14th Amendment was passed, it became THE HIGHEST WILL OF THE PEOPLE, that the majority may not act to deny rights to the minority that they, themselves, enjoy. As state after state make same-sex marriage legal, largely on the basis of the 14th Amendment's Equal Protection Clause, it is inevitable that the Justices of SCOTUS will eventually make marriage equality the law of the land, if the rest of the states don't beat them to it.

The federal judge overturning the Utah state ban made it effective immediately, so same-sex couples began lining up for marriage licenses and the mayor of Salt Lake City (no less) performed the first legal ceremony in the state. This will not be without opposition from the powers that be. Both Utah's governor and attorney general are pursuing whatever legal options they have, but their prospects are bleak.


Whenever an unjust law is overturned by a judge, we hear the accusation, "activist judges!" Yes, indeed. These judges are actively defending the highest will of the people as understood in the 14th Amendment.

Rev. Steve Kindle is Executive Director of Clergy United and author of  Marriage Equality: Why Same-sex marriage is good for the church and the nation.