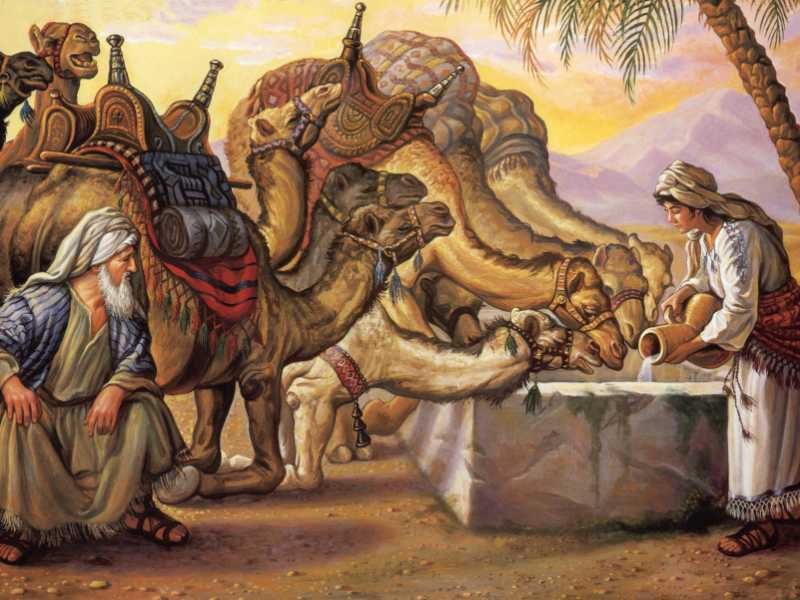 How do you go about finding a mate?  How we answer that question may depend on our culture and our time in history.  In America it is assumed that a person will date a number of people, starting in high school or soon after, before making a decision.  It’s assumed that a person needs to get know different kinds of people so that they can figure out with whom they can find the best match.  Over the course of time, they might meet someone they feel comfortable with and wish to commit the rest of their lives.  Although some couples create pre-nuptial agreements protecting assets they bring into a marriage, that rarely happens the first time around.  For one thing they often bring very few assets into the relationship, and the romantic vision has yet to be tainted by broken relationships.

The age at which marriage first occurs is getting later every year.  Over the past thirty years the median age at which couples get married has increased from 24.7 for males and 22.0 for women to 28.2 and 26.1 in 2010.  That might not seem like a lot at first glance, but a lot happens in four years time.  One of the differences between that earlier day and today is that there is a growing trend, especially among women, to first get established in the work force and then begin looking to settle down, get married, and perhaps have children.

Perhaps one of the reasons why there is a growing interest in using Internet dating sites that range from secular to religious, with numerous niche markets, is that if one is waits until they get established in a career then they will have moved beyond the traditional places where mates are found, such as high school and college.  The television is filled with advertisements for dating sites such as Match.Com and E-Harmony, all promising that their specially designed software can help participants find that perfect match.  They even tap into the vision that each person has a special soul mate.  For Christians there are sites such as ChristianMingle.com that suggest that God can use this site to help guide you to the perfect match.   As they say on the website:    “Trust God and your God-given instincts to guide you through this experience.”  All you have to do is create your profile, pay the fees, and you’re on your way to finding the person God has for you.

In the ancient world, as remains true in many parts of the world even today, marriages are arranged by families.  These arrangements often have strategic political or financial benefits.  Besides, women were, for the most part, considered to be the property first of the father and then of the husband.  A father of a daughter needed to make sure that his investment in his daughter received the best return.  There are romantic moments in the bible, and I expect that there was true love among couples, but for the most part love came after the marriage and not prior to it.  The idea, however, that one would go on a date – or even date different people before deciding whom to marry – would be a very foreign concept to the people we meet in scripture.  Therefore, the idea that the Bible can provide us with principles for dating makes little sense.  It’s not that there isn’t some good moral advice to be found in Scripture, it’s just not specific to dating.  So, while we often heard in bible study the advice to not get “unequally yoked with an unbeliever” (2 Corinthians 6:14), in our dating lives, I’m not sure that this was Paul’s focus.  It was useful information, however, because we were told that dating outside the fold could be risky.   The idea of missionary dating – dating a non-Christians with an eye to converting them -- was especially discouraged.

So, how did people find a mate back in Bible times?   Genesis is an excellent place to go for examples of how matches were made in the ancient world.  Consider one example – the story of how Isaac got connected with Rebekah.  In this story, Abraham was getting old.  Sarah had died.  He needed to protect his legacy.  Remember that God had promised him that through Isaac and his descendants the nations would be blessed.  Abraham didn’t think that the local Canaanite women would make a good wife for Isaac, and this won’t be the last time that this happens.  Concerned that Isaac needed to find a proper mate, he called in his servant, and made him promise to go back to Abraham’s people, and find a wife there for his son.  There was one major stipulation.  This future bride had to be willing to leave her home and join Isaac in their new country.  There was no going back for Abraham and his descendants.  With this charge from Abraham, this servant took ten camels, along with choice gifts, and headed off for the city of Nahor in Aram-na-haraim.  Arriving in the appropriate neighborhood, the servant stopped at a well.  Wells seem to have been a great place to meet eligible girls.  So, having arrived at the local well, he settles down his camels, and prays to God for success in finding a mate for his master’s son.  He prays:

“Let the girl to whom I shall say, ‘Please offer your jar that I may drink,’ and who shall say, ‘Drink, and I will water your camels’—let her be the one whom you have appointed for your servant Isaac. By this I shall know that you have shown steadfast love to my master.” (Genesis 24:14).

Before he finished the prayer, Rebekah, the daughter of Abraham’s brother, came to the well.  She responded appropriately to the servant’s request that she give him a drink and water his camels.  Therefore, he gave her a gold nose ring and two gold bracelets (that age’s engagement ring?), and the deal was made.  This couple who will play a significant role in the biblical story, never met until the servant brought her home to where Isaac was living.   All that was left to do was for Isaac to take her into his mother’s tent, and with that she became his wife.  Then we’re told – “he loved her” (Genesis 24).

As we saw earlier with Jacob and his two wives, the marriage was kept within the family.  The bride and groom were first cousins, not kissing cousins.  But apparently that was okay back then.

That is one story of match-making.  There are many like it.  Some matches are good.  Some aren’t.  While Solomon is said to be wise, his choices in wives were roundly condemned.  It seems he “loved many foreign women,” including Pharaoh’s daughter.  As a result, he was led astray to worship the gods of his many wives (the danger of being unequally yoked).  Of course, Solomon’s marriages were probably based on strategic partnerships, which the writers of 1 Kings didn’t approve of (1 Kings 11:1-10).

One of the more interesting matches is one that Yahweh instigated.  God told the prophet Hosea to go and marry a prostitute.  God says to Hosea “Go take for yourself a wife of whoredom, and have children of whoredom, for the land commits great whoredom by forsaking the Lord.”  So he went and took Gomer, daughter of Diblaim, and she conceived and bore him a son” (Hosea 1:2-3).  She would bear him several children, all of whom Hosea was directed to name with horrific names, names that spoke of divine judgment.  If anything this story is a warning against saddling children with unflattering names.  It also reminds us that marriages and families are often dysfunctional from the very beginning.  They can be based on unfortunate foundations.  We might think that God is involved, but is this really true?

When we read the biblical story, it seems clear that there isn’t one universal pattern for choosing a partner.  It’s also clear that the patterns we find in the biblical story do not fit very well, if at all, with our current realities.  While there are some attempts, among certain groups to retain older visions of women, in most of our communities, such a vision is not welcomed.  The idea that a woman is the property of her father or her husband is simply repugnant to our modern sensibilities.  And so we will create new ways of finding companions with whom to share our lives.  It may very well be that the Internet will be a useful tool.  However, we determine how to do this, in changing times, the key will be respecting the other person’s humanity and integrity as a person.

Another chapter in formation of marriage study guide.