Dare We Speak of Hope? (Allan Boesak) -- A Review 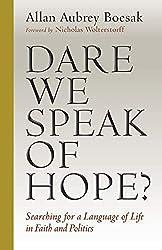 Religion and politics – these can be and often are volatile partners.  The founders of the United States sought to separate them institutionally, but since religion and politics are central to human life, the lines are often blurred.  So, how does one speak a word of hope when faith and politics intersect?

Religion played a significant role in the South African struggle for freedom and equality.  Both sides in this struggle appealed to religion.  Both found support and sustenance.  That apartheid finally collapsed could be a sign of God’s favor, but that is a matter of interpretation – as was true 150 years ago in the midst of the American Civil War.  One of the key figures in this struggle for freedom in South Africa was Allan Aubrey Boesak.  Boesak recently served as the first holder of the Desmond Tutu Chair for Peace, Global Justice, and Reconciliation Studies at Christian Theological Seminary and Butler University in Indianapolis.  Before this recent honor, Boesak served as a pastor, theologian, and anti-apartheid activist in South Africa.  He was a member of the Coloured branch of the Dutch Reformed Church in South Africa.  Like everything else in that nation, even the church was separated by color.

In Dare We Speak of Hope? Boesak brings his experiences in the liberation efforts in South Africa into the contemporary conversation.  He also brings into the conversation the election of Barack Obama, for it too signaled a change in the political fortunes of persons of color in this nation, even as the end of apartheid and the election of Nelson Mandela did in South Africa.  The journey, in both countries, has not reached its climax.  In neither places has a true – post-racial society been born.  But, there is hope that we can build bridges of hope that will move us to that day of reconciliation.  The greatest enemy in both countries is cynicism and the pursuit of power at the expense of the most vulnerable in society.  Will we, fall prey to the “lure of what Martin Luther King defined as ‘detachment?’”  That detachment involves being “too unconcerned to love and too passionless to hate . . ....” (p. 13).

With the challenges of cynicism and detachment standing in our way, can we embrace a vision of hope?  In writing this book Boesak challenges people of faith not to abandon politics, but instead “strengthen our commitment to the politics of justice, peace, and equity” (p. 21).  Boesak’s understanding of the relationship of the two emerged from a liberationist context.  Simply retreating to a non-political religion would not bring to an end the injustices perpetrated, often in the name of God, in his country and in ours.

In the course of this book, Boesak invites us to consider a word of hope in six different contexts or ways.  First, we must speak out of a sense of woundedness.  It is not victimhood, but recognizing that injustice occurs, people are physically, emotionally, psychically, and spiritually injured by injustice.  It is recognition of suffering, and it is a hope that emerges from suffering that refuses to be silenced.  It is resilient, Boesak writes, because it is “rooted in the promises of God, in the incarnation of Jesus Christ, and in the faithfulness of God’s people.

Hope involves speaking of Hope’s children – and Boesak reminds us that hope takes on the woman’s voice.  He draws from Augustine who said that hope has two daughters – anger and courage.  Boesak reminds us of an important element of organizing – one must own one’s anger at injustice.  But both anger and courage are needed for there to be hope.  One must be outraged to act

Hope involves speaking of struggle – and for non-white South Africans that struggle continued from the formation of the Union of South Africa as an independent white country that denied political rights to a considerable portion of its population to the end of apartheid in 1994.  That was a period of eighty-four years.  For some the pathway involved violence, and for others, like Boesak, it was through non-violence.  That is, by way of the cross.  Boesak writes that “hope is found where Jesus is to be found, this Jesus who was despised and rejected, whose countenance, like the faces of the wretched of the earth, no one desires to gaze upon” (p. 80).

Hope comes as we speak of seeking peace.  This chapter should be a challenge for Americans who by and large find it difficult to recognize their (our) complicity in imperialism.  Our ability to act in peace is complicated by ideas of American innocence and manifest destiny.  Boesak asks whether we are willing to embrace the message and example of Jesus and pursue nonviolent struggle.  He writes:

If we have a hopeful word to say at all, we should, in these matters, seek to be the voice of the innocent victims of war, never the voice of the powerful, who for whatever ambiguous reasons “have to have a war.”  (p. 114)

As history demonstrates, violence is never the solution to the world’s problems.  Neither world war was the war to end all wars, they just spawned new ones.   As one who embraces non-violence, but isn’t a committed pacifist, I take to heart Boesak’s challenge.

Hope comes as we “speak of a fragile faith.”  It is recognition that we, in ourselves, are weak.  We do not act from a position of strength.  It is a faith that wrestles with the lure of power.  Boesak notes that in political life, President Obama could not maintain the “audacity of hope” that he first heard Jeremiah write speak of in sermons.  That is because, “hope is too subversive of politics” (p.  139). Our hope, then, lies not in the power of politics, but we cannot avoid politics either.

Our ability to speak of hope requires an ability to dream.  Martin Luther King spoke of dreams, and Joseph was a dreamer.  Indeed, Nelson Mandela was a dreamer.  Boesak speaks of Mandela’s recognition at the end of life, looking forward not from the position of power or glory, “but as a hope-filled captive of ubuntu:  my humanity, and my human well-being, is caught up in your humanity.  I cannot be what I want to be until you are what you need to be” (p. 169).  It is a forward looking vision that is not content with what is, but looks to what needs to be.

Boesak’s book emerges from his experience in South Africa.  It is a story that many of us have heard, at least in parts.  We know the stories of people like Nelson Mandela and possibly Stephen Biko.  It is a story of oppression and liberation.  But it remains an unfinished story – even as the road to freedom in America has not yet reached its destination.  Politics is part of the story.  But it is not the whole of the story.  If we are to pursue justice and experience hope, then, as Boesak reminds us, “we have to learn the lesson that while our hope has to shape our politics, the center of our hope never lies in politics or politicians.  Christians have to look elsewhere if we are to find a hope that is durable, life-affirming, and life-giving” (p. 176).   Neither political party has the final answers to our search for hope.  They can be a means to an end, but they are not the end.

Hope involves the pursuit of justice.  It is a struggle that requires anger and courage, dreaming and a recognition of our own weakness.  If we want to engage in a struggle that truly changes the reality for those on the margins, then we would be wise to consider the wisdom of Allan Boesak, a wisdom forged in the struggle for human dignity and justice.  Both Nelson Mandela and Barack Obama are signs of hope, but not the means of hope.  The struggle is not over.  Thus, we need guides like Boesak, if we are to understand the relationship of our faith to our politics – that we might be harbingers of hope.
Allan Boesak Apartheid Books faith hope Injustice Liberation Theology Poltiics Reviews South Africa