The Reign of God Is Forever -- Sermon for Pentecost 3C 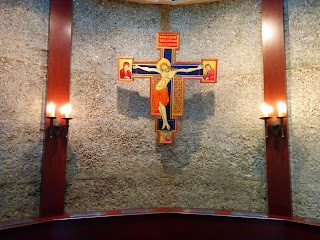 We’ve come to the third stop on our summer journey through the Psalms. So far the Psalmist has reminded us that God is our creator and our judge. In Psalm 146, the Psalmist declares that Yahweh is the ruler of all creation. Indeed, the Psalmist invites us to “sing praises to [our] God for as long as we live,” because God will reign forever.

We come to this place to give praise and thanksgiving to the one who “made heaven and earth, the seas, and all that is in them.” It is God, who “executes justice for the oppressed; who gives food to the hungry.”

Even as we celebrate God’s eternal reign, the Psalmist warns us against putting our trust in princes. That is, don’t put your trust in human leaders. This warning seems appropriate during this rather contentious political season, when trust in leaders seems at an all-time low. It’s almost as if this declaration is redundant, because today no one trusts their leaders. Of course, not all leaders are bad leaders or bad people.  It’s just that our leaders are human beings, with all the baggage that goes with being human.

While we’re thinking about human leaders, it’s appropriate that we will be electing leaders for the church immediately following the service. Church leaders also are humans, and when church leaders trust in their own devices their plans will surely perish. Morgan Guyton has written a book titled: How Jesus Saves the World from Us. In that book Guyton has a chapter titled “Temple, Not Program.” What he writes about the difference between sacred space and programs fits our conversation:

A temple is a space that captivates your spirit because it belongs to God. A program is an event that human beings plan in order to manufacture an experience for others. A temple is sacred, while a program is secular. Temples could not exist without God, but programs aren’t dependent on God. [Guyton, p. 96].

While we need leaders in human society, whether it’s the state or the church, the Psalmist reminds us that because leaders are human, “when their breath departs, they return to the earth; on that very day their plans perish.”  So, it doesn’t matter how charismatic or attractive a leader might be, none of them, no matter how good, is a messiah.

We can build great monuments to ourselves, but in the end we will all die. We may have great plans for the future, but very often they fail to bear fruit. Even if they bear fruit, success might not be forever. We can build magnificent buildings, but unless they reflect God’s presence they will end up as empty shells.

If you put your trust in human leaders, no matter how good or dedicated they may be, they will ultimately fail to fulfill their promises. Every time a new President is inaugurated they offer their vision for the future. They also will offer a laundry list of things they plan to do. At the end of the term, a great many of the promises remain unfulfilled. It’s not they didn’t want to fulfill their promises, it’s just that human reality got in the way. But, “happy are those whose help is the God of Jacob, whose hope is the Lord their God, who made heaven and earth, the sea, and all that is in them; . . . .”  It is this God who “executes justice for the oppressed; who gives food to the hungry.”

In Psalm 146, the Psalmist celebrates God’s acts of liberation. God is our shield and defender who reigns forever. This message is delivered in the second stanza of Luther’s powerful hymn “A Mighty Fortress Is Our God,” where we sing:

Did we in our own strength confide, our striving would be losing,
but there is one who takes our side, the one of God’s own choosing.
You ask who that may be? Christ Jesus, it is he with mighty pow’r to save,

But what is the nature of this power that will prevail triumphantly? This past Wednesday, the Bible Study group was looking at John’s account of Jesus trial, death, and burial. In John’s account of the trial, there’s an interesting exchange between the Roman governor of Judea, Pontius Pilate, and Jesus. The topic of this conversation is the nature of Jesus’ kingdom. Pilate understands only one kind of power, the kind of power that Rome exerts through its military might. So, if Jesus is the king of the Jews, where is his army?  That’s Pilate’s question. That’s his concern. After all, Rome didn’t take kindly to upstart kings living within its borders. Jesus answered Pilate by telling him that his “kingdom was not of this world” (John 18:33-38). This statement made little sense to Pilate, and it still makes little sense to the world, including the world that influences the church. From time immemorial, power requires a strong military presence. But that’s not the way things work in God’s realm.

In God’s realm, prisoners are set free and the eyes of the blind are opened. Yes, God “watches over the strangers; he upholds the orphan and the widow, but the way of the wicked he brings to ruin.”  This is the kind of realm that Jesus proclaimed. It’s the kind of realm he invites us to inhabit. It’s a realm that no human leader can create.

Now, if you check the scoreboard it doesn’t seem as if God is winning. When we look at the world as it stands, it seems as if the wicked do prosper. That fact wasn’t lost on the Psalmist, who complained to God in Psalm 73:

2 But as for me, my feet had almost stumbled;
my steps had nearly slipped.
3 For I was envious of the arrogant;
I saw the prosperity of the wicked.
4 For they have no pain; their bodies are sound and sleek. (Psalm 73:2-4).

So where is God? How is God engaging in  liberating efforts described here in Psalm 146? Theologian John Cobb offers this answer:

The point was not that oppression will end and a perfect world will replace it. The point was that the everlasting God, creator of heaven and earth, works in history for the liberation of the oppressed. Since human rulers come and go, and all die, God’s everlasting work gives us assurance that our efforts and our hopes are not futile. [Feasting on the Word, C, 3: 108].

It’s not through overt acts of power, as the world understands them, that God acts. It’s a different kind of power. It’s the kind of power demonstrated during the early days of the Civil Rights Movement. When the marchers tried to cross the Edmund Pettus Bridge, they were brutally beaten back, but this brutal response to their march didn’t change their sense of purpose. Because they acted nonviolently in the face of violence, they caught the eyes of the world and things began to change.

God works in ways that might seem mysterious to us, but God is still present and at work. Therefore, the Psalmist wants us to remember that God  reigns forever, often acting in ways that are unseen to effect healing and liberation within creation. The good news is that we have been invited to be instruments of God’s work. We are charged with being ambassadors of reconciliation, so that God’s reign might be extended on earth as it is in heaven.

When we recite the Lord’s Prayer each week, we pray that God’s realm will come and that God’s will would be done on earth as it is in heaven. In praying this prayer, we give our ultimate allegiance to God, whose name is holy. In praying this prayer, we commit ourselves to participating in God’s kingdom work in this world. It’s important to remember that we can’t impose God’s will on the world. We can only invite the world to share in God’s vision of the new creation.

In a moment we’ll sing Joachim Neander’s hymn “Praise to the Lord, the Almighty.” With this hymn we will declare:

Praise to the Lord, the Almighty, who rules all creation.
O my soul, worship the well-spring of health and salvation.
All ye who hear, now to God’s Temple draw near.
Join me in Glad Adoration (Chalice Hymnal, 25).