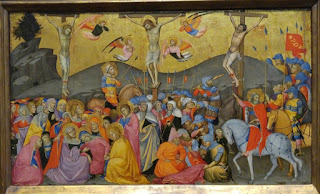 33 When they arrived at the place called The Skull, they crucified him, along with the criminals, one on his right and the other on his left. 34 Jesus said, “Father, forgive them, for they don’t know what they’re doing.” They drew lots as a way of dividing up his clothing.

35 The people were standing around watching, but the leaders sneered at him, saying, “He saved others. Let him save himself if he really is the Christ sent from God, the chosen one.”

36 The soldiers also mocked him. They came up to him, offering him sour wine 37 and saying, “If you really are the king of the Jews, save yourself.” 38 Above his head was a notice of the formal charge against him. It read “This is the king of the Jews.”

39 One of the criminals hanging next to Jesus insulted him: “Aren’t you the Christ? Save yourself and us!”

40 Responding, the other criminal spoke harshly to him, “Don’t you fear God, seeing that you’ve also been sentenced to die? 41 We are rightly condemned, for we are receiving the appropriate sentence for what we did. But this man has done nothing wrong.” 42 Then he said, “Jesus, remember me when you come into your kingdom.”

43 Jesus replied, “I assure you that today you will be with me in paradise.”

*****************
There is a phrase in the Mel Brooks movie, History of the World, Part 1, that always makes me chuckle. One of the characters, played by Brooks, declares at one point: “It’s good to be the king.” Or is it? It wasn’t good for Charles I of England or Louis XVI, or most of the Roman emperors for that matter. This week brings the liturgical year to a close. We’ve spent most of our time in the Gospel of Luke. Luke has much to say to us about Jesus and the realm of God. But surely the creators of the lectionary could find a more appropriate reading from the Gospel to celebrate Christ the King Sunday. Why do we find Jesus on the cross? Perhaps the reason is that this is Jesus’ crowning moment. This is the moment when he demonstrates the kind of king he truly is.

Whatever the form of government we can think of, whether monarchy or an American-style democracy, to the victor goes the spoils. We know that anyone who seeks to be in leadership will be ambitious. If you want to have power, you must grasp for it. Seldom does power go to the one who has no desire for power. So, perhaps Nietzsche is correct in his analysis of what makes humans tick. Perhaps we are driven by the desire for power. We see it exhibited throughout scripture. One of the earliest stories pits two brothers, both of whom want to be in God’s good graces. When one seems to prevail, the other responds with violence. This is the story of Cain and Abel. It is but the first of such stories. Indeed, it was the night prior, after Jesus shared a final meal with the disciples that they got into an argument about who was the greatest in their little band (Luke 22:24-27).

I write all of this to put the reading for Christ the King Sunday in proper context. Here is our king, the one who represents to us the realm of God. We find him hanging on a cross, being buffeted with abuse. Proclaimed by some as the Christ and king of the Jews, it would appear from his current condition that he is simply another pretender whom the Romans have dealt with expeditiously before things got out of hand. As a mark of further humiliation, Jesus hangs between two criminals. There is a trend in scholarship to speak of the cross as a form of execution that is used primarily to deal with political types. That is probably true, but in Luke’s description of the scene, the two men hung on either side of him aren’t described as being revolutionaries. These are common criminals. Thus, Jesus is pushed further down into the muck of humanity. Surely this is not the one whom we are called to embrace and follow? Yet, here we are, with the crucified Jesus as the prime expression of God’s realm. Of course, this is fitting, since according to Luke, Jesus started out his life in a barn, because there was no room in the inn for the family. His birth may have been celebrated by angels, but it was witnessed to by shepherds (Luke 2:1-20).

A life begun in anonymity, ends in ignominy, or so it seems.  With Jesus, nothing is as it seems. So, as we stand and watch and listen to the crowd, we see and hear community leaders, soldiers, and even a criminal, question his calling. If you’re the Christ, they called out, then save yourself. Use your power to climb off the cross. As for the one crucified with him, a request goes out to get him his cross. This is the “last temptation of Christ” is it not? If you have the power, why not use it? Why suffer needlessly, when you can demonstrate your power and authority in a dramatic way?

Of course, Jesus doesn’t climb down from the cross. That’s not his destiny. Instead he endures humiliation and pain, not because God requires such a sacrifice to appease the divine wrath, but because humanity can’t fathom this kind of leader and must do away with him. We have short attention spans. We’re quick to abandon our heroes. Then again, not everyone is in the same place. There was one who seemed to recognize the importance of the moment. It was one of the criminals hanging by his side. While one of Jesus’ “neighbors” joined in the chorus of abuse, the other simply asked Jesus to remember him in the kingdom. Jesus responded with a word of grace and forgiveness. Jesus told him that he would be with Jesus in Paradise that very day.

The mention here of Paradise, could open a can of worms, if we chose to take up the question of the nature of Paradise. For now, let’s just imagine this as God’s realm. We don’t want to be distracted from the question of the nature of Jesus’ reign and the realm of God, which he represents. This realm is different from the kingdoms of this world. He’s a different kind of king.

The hint of the nature of Christ’s realm is found in the response to his second neighbor. Jesus welcomes him into his community, thereby offering him forgiveness and grace. Nancy Westfield notes:

Jesus spent his entire ministry teaching and preaching out the kingdom of God. One of Jesus’ last forgiving acts on earth was to proclaim that repentant sinner would be with him that day in heaven. Oh, praise God!  [Feasting on the Word, C, 4, p. 336].

Such an offer would, of course, be in keeping with Jesus’ own sense of calling, as expressed in his “inaugural address” delivered in the synagogue in Nazareth (Luke 4:16-21). While this wasn’t a literal release of the captive, in a spiritual sense that is exactly what happened here.

If the penitent criminal is set free and invited into Paradise/heaven, then what does that mean for the realm of God? I can’t help but picture the three men, each hanging on their own crosses. The second man tells the first, who had mocked Jesus, that unlike Jesus, they deserved their sentences. This is Luke’s way of reminding us that Jesus is the innocent one. He seems to recognize the difference in Jesus. So, by responding in this way, the repentant criminal receives grace that is available to all, or so we believe. With this confession of faith, Jesus draws the man into his inner circle. In one of his final acts in this life, is to remind us that the realm of God consists not of the rich and powerful. It’s not that God doesn’t love the rich and powerful, it’s just that they have no prior claim on seats at the banquet table. In fact, it is those whom the world shunts off to the side that Jesus grants a special place.  Such is the story of God’s realm and Christ’s reign!

Fr. David Lupo said…
Very good areas covered in this work. I most like the words about reconciliation, which is mentioned in the second reading.