What Must We Do? -- Lectionary Reflection for Easter 3A (Acts 2) 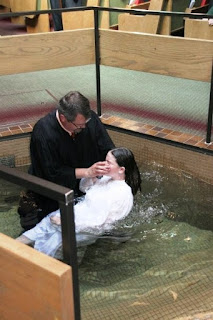 14 But Peter, standing with the eleven, raised his voice and addressed them, . . .

36 Therefore let the entire house of Israel know with certainty that God has made him both Lord and Messiah, this Jesus whom you crucified.”

37 Now when they heard this, they were cut to the heart and said to Peter and to the other apostles, “Brothers, what should we do?” 38 Peter said to them, “Repent, and be baptized every one of you in the name of Jesus Christ so that your sins may be forgiven; and you will receive the gift of the Holy Spirit. 39 For the promise is for you, for your children, and for all who are far away, everyone whom the Lord our God calls to him.” 40 And he testified with many other arguments and exhorted them, saying, “Save yourselves from this corrupt generation.” 41 So those who welcomed his message were baptized, and that day about three thousand persons were added.

On the Day of Pentecost, the Holy Spirit fell upon the church and created quite a stir, which gave Peter, standing with the eleven other Apostles, the opportunity to proclaim the gospel of Jesus to the gathered crowd.  Peter tells them that God has “made him both Lord and Messiah, this Jesus whom you crucified.” That is, God has vindicated the one God sent into the world, but which the world rejected. Having finished the sermon, it’s clear that the message has touched a chord, and the people who heard the message have a question for Peter and his companions: “what should we do?” What’s next?


Peter’s answer to this question is straightforward. Repent, be baptized, and you’ll receive forgiveness of sins along with the gift of the Holy Spirit. Notice that forgiveness and the gift of the Spirit presume prior repentance and baptism (apparently in that order).

For people raised in the Stone-Campbell Movement, which includes the Disciples of Christ (my denomination), this should be familiar territory. We ought to know this passage by heart, because it forms the basic message of salvation as proclaimed from the early days of the movement. One of the founders of this movement, the evangelist of the movement, Walter Scott, devised what he called the “Five-Fingered Exercise” to get out this message. As the story goes, when Scott went into a new community, he would find a few children playing, teach them the five points of the plan of salvation, pointing to each finger, starting with belief, and moving on to repentance, followed by baptism (by immersion of course), which led to the reception of forgiveness and the gift of the Holy Spirit. It’s that simple. Just believe the message, repent of your sins, get baptized (by immersion, of course) to seal the commitment, and then God will faithfully honor that commitment by forgiving sins and providing the gift of the Holy Spirit. This seems rather transactional, but it is appealing in its simplicity. This promise The promise applies to everyone, both those near (Jews) and those far away (Gentiles).

Apparently, Peter wasn’t quite finished with his sermon because, after giving the invitation, he continued testify and argue, calling on the people to save themselves from a corrupt generation. It’s also apparent, from Luke’s account, that Peter’s sermon was effective. Three thousand were saved that day, being baptized and added to the church. That’s a good result, especially since the Christian community hadn’t done any prep work. They didn’t hire out a stadium nor did they advertise the effort. Overnight the church grew from around 150 to over 3,000, drawing people from all over the Jewish diaspora.

So, what is going on here? What is Luke up to as he tells this story. First of all, what does it mean to repent? Ron Allen writes that “to repent is to turn away from the old age (Acts 2:40), and to turn toward God and the coming of the realm.” This is confirmed by baptism (immersion), which “assures people that God has forgiven their sins.” He continues, noting that for Luke, “sin is complicity with the old age; forgiveness, means that one is no longer determined by that age.” Baptism serves to initiate a person into the realm of God. [Acts of the Apostles, p. 36.] The kind of conversion stipulated here is one that changes a person’s orientation in life. Old loyalties and allegiances are traded for new ones. We’re not simply talking about joining a church. We’re talking about the transformation of lives, a movement from the old age to the new age. This vision of salvation fits well with what Paul declares concerning the message of reconciliation in 2 Corinthians 5.

The lectionary reading ends with verse 41, which speaks of the number of those added. In the paragraph that follows (the reading for Easter 4A), we see what the new social reality that emerges from this call to follow Jesus looks like. It is important to note that while Peter speaks of both those near at hand and those far off, he is not asking those who are Jewish to leave Judaism and become Christians. Peter speaks to an audience that is Jewish and offers a message that is deeply embedded in Judaism, but Peter does invite his audience to join a new community that is Jewish, but centered in the message of Jesus.

The message of Peter seems to hold an offense, for it can be taken as a denigration of Judaism, but we need to remember that Peter is a Jew, sharing the message of Jesus, a Jew, to an audience that is Jewish. So, if there is an offense here it is to the religious impulse that thinks it has God in its sight. With that in mind, we can find some help in the words of theologian Willie Jennings:

God will stand over against religious faith, as neither its friend nor its enemy, but as God. Here is the point of offense: all religious faith believes it already has God in its sight. It knows and seeks after; it tirelessly devotes time, energy, and resources to the Holy. Those who hear this message, however, encounter a difference born of the body of Jesus. He is a difference in Israel that will yield an intensification and alteration of the faith received. But he must be chosen. He will not destroy faith in God, only fulfill it. But he must be chosen. [Acts (Belief), pp. 36-37]

This is a thoroughly Jewish message, but it takes us in a new direction, for it is centered in Jesus. We who hear this message as Christians, might hear its offense as well, for we too can think we have God in our sight, when in reality it is God who has us in sight, and is calling us to a renewed vision of God that transforms lives. What that looks like is revealed in the verses that follow (for Easter 4A).