A Marriage Made in Heaven? - A Lectionary Reflection for Pentecost 5A (Genesis 24) 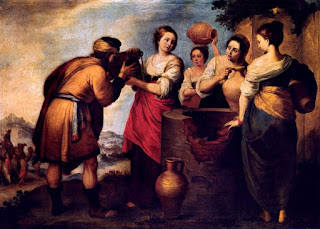 34 So he said, “I am Abraham’s servant. 35 The Lord has greatly blessed my master, and he has become wealthy; he has given him flocks and herds, silver and gold, male and female slaves, camels and donkeys. 36 And Sarah my master’s wife bore a son to my master when she was old; and he has given him all that he has. 37 My master made me swear, saying, ‘You shall not take a wife for my son from the daughters of the Canaanites, in whose land I live; 38 but you shall go to my father’s house, to my kindred, and get a wife for my son.’

42 “I came today to the spring, and said, ‘O Lord, the God of my master Abraham, if now you will only make successful the way I am going! 43 I am standing here by the spring of water; let the young woman who comes out to draw, to whom I shall say, “Please give me a little water from your jar to drink,” 44 and who will say to me, “Drink, and I will draw for your camels also”—let her be the woman whom the Lord has appointed for my master’s son.’

45 “Before I had finished speaking in my heart, there was Rebekah coming out with her water jar on her shoulder; and she went down to the spring, and drew. I said to her, ‘Please let me drink.’ 46 She quickly let down her jar from her shoulder, and said, ‘Drink, and I will also water your camels.’ So I drank, and she also watered the camels. 47 Then I asked her, ‘Whose daughter are you?’ She said, ‘The daughter of Bethuel, Nahor’s son, whom Milcah bore to him.’ So I put the ring on her nose, and the bracelets on her arms. 48 Then I bowed my head and worshiped the Lord, and blessed the Lord, the God of my master Abraham, who had led me by the right way to obtain the daughter of my master’s kinsman for his son. 49 Now then, if you will deal loyally and truly with my master, tell me; and if not, tell me, so that I may turn either to the right hand or to the left.”

“May you, our sister, become    thousands of myriads;may your offspring gain possession    of the gates of their foes.”

61 Then Rebekah and her maids rose up, mounted the camels, and followed the man; thus the servant took Rebekah, and went his way.

62 Now Isaac had come from Beer-lahai-roi, and was settled in the Negeb. 63 Isaac went out in the evening to walk in the field; and looking up, he saw camels coming. 64 And Rebekah looked up, and when she saw Isaac, she slipped quickly from the camel, 65 and said to the servant, “Who is the man over there, walking in the field to meet us?” The servant said, “It is my master.” So she took her veil and covered herself. 66 And the servant told Isaac all the things that he had done. 67 Then Isaac brought her into his mother Sarah’s tent. He took Rebekah, and she became his wife; and he loved her. So Isaac was comforted after his mother’s death.

When it comes to marriage, we live in interesting times (I have authored a bible study guide titled Marriage in Interesting Times in case you’re interested in what the Bible might say regarding marriage—it’s not exhaustive, though). With the Supreme Court ruling on marriage equality and the growing trend to postpone marriage until couples are settled into careers, and perhaps even purchase a home, among other things, I can safely say that things have changed since I was married nearly forty years ago. But things have changed even more dramatically over the past two to three thousand years, as can be seen in this reading from Genesis. One of the reasons I wrote a bible study guide focusing on marriage related texts is that many Christians struggle with the relationship of the Bible and current trends. We hear people talk about “biblical marriage,” but seem to equate 1950s era family arrangements with the biblical story. So, if we’re going to have a conversation about “biblical marriage” it might be good to know what the Bible actually says (and not just a few proof texts taken out of context).

The broader context of this story is a reminder of the importance placed on tribe and kinship in the ancient world. Abraham and Sarah lived among the Canaanites, but when it came time for their son to get married, settle down, and have a family, they didn’t want Isaac to take a wife from among their neighbors. They wanted him to find a wife from within their own kinship group. So, after Sarah died and was buried, Abraham decided it was time to provide Isaac with a wife so that the family legacy could continue (remember God promised Abraham to make him the father of nations). So, Abraham sent his servant to go to the house of his kinsman to find a wife for Isaac (Gen. 24:1-9). The lectionary reading for the fifty Sunday after Pentecost begins with the servant’s accounting to the father of Isaac’s prospective bride, how he discerned that Rebekah was an answer to prayer.

The key players in the story are Abraham’s servant, Rebekah, her father Bethuel, and of course Isaac. The entire story covers all of Genesis 24, but the lectionary provides us with excerpts. The focus is on the servant’s discovery of Rebekah, the agreement to give Rebekah to Isaac, Rebekah’s willingness to go with the servant, and Isaac’s positive reception of Rebekah.

I titled the reflection “A Marriage Made in Heaven,” because Rebekah is understood to be an answer to prayer. After arriving in the region of Abraham’s kin, he offers a very specific prayer. The woman who comes to the well to draw water, who agrees to provide him a drink of water and water his camels will be the right mate for Isaac. Low and behold, as soon as the prayer is offered, Rebekah comes to the well. When the servant asks her to provide him a drink and water his camels, she agrees. It is all as he had prayed. Not only did she respond as hoped, but she was from the right family. Now the question was whether the family would let her go be the wife of Isaac, and whether she would agree. I think it is striking that while this is all an arranged marriage, Rebekah is given a voice in this, and she agreed to go.

With this decision, the family sends her off with a song of praise: “May you, our sister, become thousands of myriads; may your offspring gain possession of the gates of their foes.” I put emphasis on the statement about becoming “thousands of myriads,” as it speaks to the covenant promise that Abraham and Sarah would be the ancestors of a myriad of nations. Now, having agreed to become Isaac’s wife, Rebekah became part of God’s covenant plan to bless the nations through Abraham and Sarah’s descendants.

The last element in the story is Isaac’s reception. To this point Isaac plays no role. He didn’t send the servant to look for a wife—that was Abraham’s doing. While Rebekah had agreed to the arrangement, would Isaac? When they arrive back in Canaan, we find Isaac having returned home from the Negeb desert, where he had been living. We’ll have to use our imaginations here to get the full picture. Isaac sees the camel train, and wonders who is coming. Rebekah sees the lone man walking toward them, and wonders who he is. Neither of them had met, but their futures were intertwined, now and forever, because they would an essential role in God’s plan. According to the story previously told, Ishmael was not the one through whom God would work. Abraham had sent him away, along with his mother Hagar. The whole story to this point is understood to reflect God’s intentions. God is guiding this. If this marriage is made in heaven, could the parties involved resist? Could they say no? Or, is this all preordained?

I must confess that while I do believe that God acts providentially, I also believe that the future is open. If things are fixed, then nothing in life is random. Whether for good or ill, if God is in control, then God is ultimately responsible. On the other hand, if things are open, then there is room for randomness. Things work out well for Isaac and Rebekah. When they met, “Isaac brought her into his mother Sarah’s tent. He took Rebekah, and she became his wife; and he loved her.” Everything worked out. She becomes his wife (note the nature of the wedding), and he loves her. What more could we ask. Besides, Isaac is now comforted after the death of his mother by the presence of another woman in his life.

When we bring this reading down to the level of our own lives, what do we hear? How does God act in our lives? On what basis did I choose my spouse, or she choose me? Was it God’s intention that we marry? Could we have married someone else or not even marry? Through the years I’ve heard people speak of God choosing their spouse for them. I saw a posting on Facebook in which a father spoke of his daughter’s fiancé as an answer to a prayer that he and his wife had been praying since the daughter was a small child. What if she had chosen not to marry? What if her choice wasn’t the “godly” young man whom she was engaged to? What if she had ended up falling in love with a woman? You see, our theologies can run into problems if we affirm a too rigid determinism. I’m not saying that open theism is the answer, only that it offers an alternative reading of reality.

If God does not determine our futures, but leaves things open, allowing us room to respond, does God participate in life? I would say yes, but as Tom Oord reminds us, God’s essential nature is love, and therefore, God acts in love. God can provide opportunities, but we have the freedom to respond. That leads to the way in which God acts. As Oord puts it, “God necessarily loves, but God freely chooses how to love in each emerging moment” [Uncontrolling Love of God, p. 162]. In other words, if either Rebekah or Isaac had chosen a different path, then God would, in love, provide a different opportunity. The future, in other words, remains open, but God continues to love, even when we make choices that are not the best.

So, was this a marriage made in heaven? It depends on how you look at it, I suppose! Things worked out pretty well. Isaac and Rebekah would have two sons, though the family dynamics had their moments of difficulty. Remember that Rebekah favored the younger son, Jacob, and arranged to have him receive the mantle, which led to alienation and exile, before finally there was reconciliation. And on it goes, to this day!