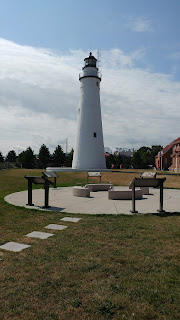 It's now Wednesday. Charlottesville remains a topic of conversation in the country and beyond (I spent a couple of nights in Canada earlier this week and it's interesting to watch coverage of American political life from that vantage point -- let me just say they're concerned that racist nationalism could spill over the border). On Sunday, like many of my colleagues, I condemned white nationalism and called for the church to be a beacon of hope. I knew what needed to be said, I said  it the best I could on short notice, and and my congregation seems to have received it well. I might even say that they expected me to speak to the moment. But where do we go from here? How do we change the rhetoric of our era which is increasingly course and often dehumanizing, a rhetoric that unfortunately has been given cover by the President.

As I ponder this unfolding story I have to consider my own complicity in all of this. One of the reasons why I have found myself looking to Reinhold Niebuhr in recent months is that he seemed to understand the complexity of motivations. He understood the attraction of nationalism and our ability to self-deceive, so that we fail to recognize our own complicity, our inability to hear the voices of those most affected. As a white middle class professional, I and many like me, can all go to Starbucks, order our latte, and then head out to protest. We can do this because of privilege. So, yes, it's easy to rail against racism and white nationalism, even as we benefit from it. Social media has made it easy to post platitudes on Facebook, share the sentiments of others, and or simply like the posts of friends who say things we agree with (I have done all such things), while failing to ask the bigger question -- why are people attracted to nihilist visions of reality that deny or undermine the true humanity of others. What is in the water?

At this point I don't have an an answer to the challenges of the moment. I know we need to speak out against white nationalism and racism and make it clear that such views don't represent Jesus or come from the heart of God. But pointing out what to me seems obvious won't get us very far. In essence all we're doing is preaching to the choir. A more difficult path is seeking to understand why people are drawn to this message of hate. As I understand it most of the marchers in Charlottesville were young white men, many of whom had traveled to Virginia from America's industrial heartland to begin uniting forces for a white supremicist push in America, to reclaim America for white people.They chose as their symbol a statue of Robert E. Lee, which was due to be removed to a museum. Yes, many of those involved hail from states , places like Ohio, Indiana, and Michigan, which once provided the heart and soul to the Union war effort during the Civil War. So, why are people who live in states that during the Civil War stood firm in supporting the Union against the Confederacy defending a statue of Robert E. Lee? For that matter, why did voters in places like Macomb County (Michigan), who gave their support to Barack Obama in the previous two years, turn around and allow Donald Trump to win the county by a nice margin (enough to turn Michigan from Blue to Red)?

What is going on in the hearts of the people of this country? What fears are stoking this turn to fascist visions? How do those of us who profess faith in the God revealed in the person of Jesus respond? How might we become a beacon of hope? My sense is that it will start with a bit of self-reflection on the part of white liberals like me, and then a bit of listening to the hearts of the disaffected and the dispossessed, so that the wounds of our nation might be bound up and healing take place.

Unfortunately, we have a long way to go. It is clear that President Trump is both unwilling and unable to give the kind of moral leadership that is needed at this moment in time. While many in Congress have spoken out against white supremacy, their own moral leadership is questionable. The church's own complicity in our nation's sins compromises its voice. Nevertheless, it is time to begin a new chapter, one that allows us to to name our sins and our complicity in creating the environment that gives birth to these movements.  Part of the process will require of white liberals like me to admit our own tendency to self-righteousness. Then we can get busy building a beloved community, which has no borders.
Email Post
Labels: Alt-Right Charlottesville hope politics Self-righteousness Sin White Nationalism