Fire and Fury Like the World has Never Seen 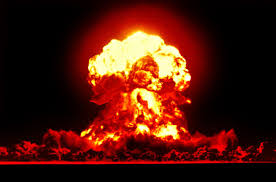 As a preacher I am familiar with apocalyptic language. One expression of that language is the promise of fire and brimstone thrown down upon the enemies of God's people. Something of that apocalyptic language came to mind as I heard the President of the United States threaten North Korea with what would appear to be a preemptive nuclear strike against that nation, should it continue to threaten the United States.  Many friends and colleagues have already given their opinion on Facebook and Twitter. I prefer to do my writing on such subjects here on the blog. While I have been reticent to engage in the increasingly negative debates that are tearing at the fabric of the nation, I thought I should say something.

First, I would say that the pace at which North Korea is developing nuclear weapons, and the seeming instability of its leader, should concern us. I grew up during the heart of the cold war. I was too young to be aware of the Cuban missile crisis, but I was alive. By the time I got to elementary school duck and cover had been abandoned, but there was always the fear that the proxy wars in places like Vietnam could break out into full scale wars with Russia or Mao's China.  But, it always seemed like we had a President who understood that pulling the trigger should be a last resort option. I'm not so sure we have that President today.

The danger of having a weapon of mass destruction is that you will eventually use it. The only cases of nuclear weapons being used in history, involves the United States. Nagasaki and Hiroshima need to be remembered right now. Those bombs, as destructive as they were, are minuscule compared to what is available today.

I don't live in fear. I will take precautions, but I won't let myself be frightened by this or other threats. What I can do is speak out, and invite others to join me, in saying no to preemptive nuclear strikes. I ask that the President stand down, in his use of rhetoric. The Korean leader is known for making threats. He reminds me of a small dog that must bark and show ferocity, so as to be taken seriously. An isolated country, with a narcissist leader, understands that possession of a nuclear weapon gives you power. I'm certain that Iran understands this. They saw what happened in Iraq. Having such a weapon is a sign of being numbered among the powerful.

I don't have an answer to this problem. I do believe, however, that the continued escalation of rhetoric can put us in dangerous territory. The President has the authority to launch such a strike. Currently there is no mechanism to check that authority. Unfortunately, we have a President who is given to militaristic solutions (it is why the State Department is being decimated), likes military parades, decorates his office with military flags, gathers generals around him. He is also a President who once asked why, if we have nuclear weapons, we can't use them.

Some of my friends are committed pacifists, and thus all war is forbidden for Christians. I respect their position, though I don't hold it. The Just War tradition has important markers, but unfortunately we have rarely followed them. Reading Moltmann's treatment, I note that the fifth marker is this:  "The means of the war may not be worse that the evil which is supposed to be overcome by it, that is, the means must stand in the right proportion to the end." [On Human Dignity, p. 119]. If we were to launch a preemptive strike (we'll leave the whole issue of use of nuclear weapons aside for now), we will kill millions, mostly civilians, which is also a key point in Just War theory.

My concern (I don't want to use the word fear) is that with the proliferation of nuclear weapons, someone will use one. Once out of the box, how do you put things back together? With that question in mind, I quote Moltmann's reflections on deterrence, which we've lived with for my entire life till now:  "There is ethically no conceivable justification of a possible destruction of humanity and of life on earth in order to protect the rights and freedom in one of the social systems in which human beings live today. A 'peace' which is bought with the threat of world destruction is no peace." [On Human Dignity, p. 122]. I have to agree with this, but how do we back away from the brink?

Do you see an apocalyptic scenario developing?  Let us pray that cooler heads will prevail so that we might see fire and fury like the world has never seen. As we pray, let us do this, with the words of the Psalmist as our guide:

God is our refuge and strength,
a very present[a] help in trouble.
Therefore we will not fear though the earth should change,
though the mountains shake in the heart of the sea;
3 though its waters roar and foam,
though the mountains tremble with its tumult.  [Psalm 46:1-3 RSV]
Email Post
Labels: Apocalyptic Politics Donald Trump Fear Jurgen Moltmann North Korea Nuclear Weapons Violence