Change of Leadership - A Lectionary Reflection for Pentecost 21A 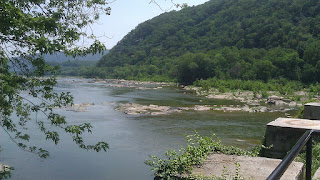 34 Then Moses went up from the plains of Moab to Mount Nebo, to the top of Pisgah, which is opposite Jericho, and the Lord showed him the whole land: Gilead as far as Dan, 2 all Naphtali, the land of Ephraim and Manasseh, all the land of Judah as far as the Western Sea, 3 the Negeb, and the Plain—that is, the valley of Jericho, the city of palm trees—as far as Zoar. 4 The Lord said to him, “This is the land of which I swore to Abraham, to Isaac, and to Jacob, saying, ‘I will give it to your descendants’; I have let you see it with your eyes, but you shall not cross over there.” 5 Then Moses, the servant of the Lord, died there in the land of Moab, at the Lord’s command. 6 He was buried in a valley in the land of Moab, opposite Beth-peor, but no one knows his burial place to this day. 7 Moses was one hundred twenty years old when he died; his sight was unimpaired and his vigor had not abated. 8 The Israelites wept for Moses in the plains of Moab thirty days; then the period of mourning for Moses was ended.

9 Joshua son of Nun was full of the spirit of wisdom, because Moses had laid his hands on him; and the Israelites obeyed him, doing as the Lord had commanded Moses.

10 Never since has there arisen a prophet in Israel like Moses, whom the Lord knew face to face. 11 He was unequaled for all the signs and wonders that the Lord sent him to perform in the land of Egypt, against Pharaoh and all his servants and his entire land, 12 and for all the mighty deeds and all the terrifying displays of power that Moses performed in the sight of all Israel.

There comes a time in every community when it will be time for a transition in leadership. It is possible that the outgoing leadership will not see the full flowering of their efforts, but that the leaders who follow will benefit from what went before. In other words, you may lead the community to the river, but not cross over to the Promised land. That responsibility will be transferred to another. I believe that is often true in pastoral transitions. One pastor sets things in motion, and another takes up the mantle and continues the journey (though adding their own mark to the journey). It’s one of the reasons why clergy are often encouraged to make a clean break from their former congregations. The new person will do things differently, and you may not always agree with their decisions. But that’s not for you, the former pastor, to decide.

I find this passage from Deuteronomy 34 to be powerful reminder of this moment of transition. It is a reminder of our limitations as individuals, but also of God’s faithfulness. God called Moses to lead the people of Israel out of bondage. Moses did as God asked, and Moses was used by God to form a people. It seems fitting that he should lead them all the way into the Promised Land, but such would not be the case. Moses would get to climb the mountain on the far side of the Jordan and look across the river into the land of promise. Yahweh showed him the land all the way to the Western Sea (Mediterranean). What a grand sight that would be. I’ve climbed mountains and looked across the vistas. It’s a powerful sight. To see all that lay ahead, but not experience it, that would be humbling. Yet, this is Moses’ reality.  What is interesting is that Moses has aged, but he hasn’t lost his eyesight or his vigor, or as Eugene Peterson puts it in his translation: “he still walked with a spring in his step” (Deut. 34:7 MSG). In other words, Moses wasn’t ready to retire, but he had reached required retirement age. After Moses saw the land of promise, he died, despite his vigor. It was time to let go, so that a new day could emerge. He dies not because of old age, but because God commands it. Not only that, but God is the one who buries Moses.

The designated successor was Joshua, who was “full of the spirit of wisdom,” because Moses had laid hands on him. In laying hands on Joshua, Moses had transferred the spirit of wisdom from himself to Joshua. We see something like this later in the story of Saul and David, though in Saul’s case, the king did not lay hands on David, but that God removed the spirit of leadership from one king and passed it on to the other, though David did not take up kingship until Saul’s death. Such is the case here. Joshua was the designated leader, but he did not take up his leadership role until Moses had been buried.

It is worth noting that Moses was buried in the plains of Moab, in an unmarked spot, so that no one could find it. There was to be no pilgrimage spot. Moses was faithful to his calling, but it was the spirit of God, who led the people. That spirit was not transferred to Joshua. Yes, they would mourn for thirty days, but then the time of mourning ended, and it was to move on. You cannot dwell in the time of mourning. You must move forward. The Promised Land awaits. There is a river to cross. Joshua is the one who will lead the people across the river. With this, the Pentateuch ends. The people of Israel are at the edge of the land of promise. The river stands before them. A new leader has arisen, who will continue the journey. From the perspective of the lectionary, we can say that the covenant promise remains in effect. Indeed, God tells Moses that the land that lays before the people of Israel is the land that God had promised to Abraham, Isaac, and Jacob. The people of God who cross the river will carry on this legacy, which has been reinforced through the time of wandering in the wilderness. God remains faithful, even when the people are not always faithful. Indeed, we are told in Deuteronomy 32, that even Moses and Aaron broke faith, and thus did not deserve to enter the land (Deut. 32:48-52). That explanation for Moses’ failure to cross the river is not revealed in the closing verses of the book, which hails him as a prophet unlike any other. Perhaps this is the better way of remembering him—not as the unfaithful one, but as God’s prophet extraordinaire.

Here in Deuteronomy 34, which closes the Pentateuch, we find a word of praise for Moses, the Prophet who knew God fact to face.  His burial place might remain unknown, perhaps so that it did not become a place of idolatry, his legacy remained with the people. No prophet had ever arisen in Israel like Moses, for he had known the Lord “face to face.” In Exodus, Moses gets to see the backside of Yahweh, but to see God face to face would result in his death. Here in Deuteronomy, Moses has known God “face to face.” What is meant here? It is important to note that we have shifted from Exodus to Deuteronomy. What happens here is not dependent on what has transpired in Exodus, but in the preceding chapters of Deuteronomy. There is a different theological orientation here that we need to acknowledge. One element in the story of Deuteronomy is that the adult generation that left Egypt would not possess the land. It would be a new generation, the generation of Joshua and Caleb, the spies who gave glowing reports on the land of Promise (Deut.1:34-40).

The reference to knowing God face to face is a strong reference to Moses’ mediation on behalf of the people. He is the one who engaged God, bringing to the people the tablets of the law. He takes on a priestly role at times, but he is not a priest, he is a prophet. What is clear in this closing scene is that leadership in Israel is charismatic. Moses takes on different roles as needed. He is priest, prophet, ruler, military leader. He exercises these roles because the spirit of wisdom resides with him. Now, at the end, that spirit is transferred to Joshua. But, unlike any other prophet, any other charismatic leader, he is the one who knows God face to face. As Deanna Thompson writes: “even in his broken, incomplete, limited human condition, he served as a vehicle for God’s redemptive action in the world.” Indeed, both the “tragedy and hope that defines Moses’ life is likely at the heart of why he continues to live on in the theological imaginations of Jews and Christians to this day” [Deuteronomy (Belief), p. 244]. Like Moses, Martin Luther King climbed the mountain, and looked across to the other side, knowing he might not make it across the river. But he was okay with this, for he had seen the Promised Land. So, as Deanna Thompson writes of Moses and the "lives of other Moseses, throughout history like Martin Luther King, Jr., we hold the tragic elements of their lives---and their deaths---together with the ways in which they participated in God's redeeming action in the world" [Thompson, Deuteronomy, p. 246].  In this, Moses serves as a model of leadership. One may not get to cross into the Promised Land, but like Moses we can be faithful to God’s vision of the realm of God. Such is a good word for all who aspire to leadership, or have it thrust upon them.