Christological Titles and their Meaning for Disciples of Christ 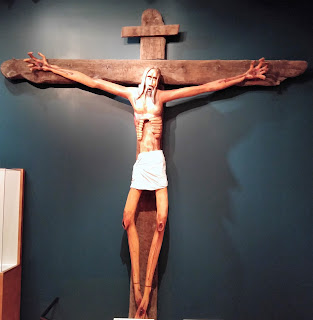 Note: This is part 2 of a chapter on Christology, which forms a chapter of a book on theology for Disciples that I have been writing for a number of years. I offer this and the other posts as a way of encouraging theological conversation among Disciples, but also across the Christian community and beyond.

Being that the Disciples have always focused on the biblical testimony, it would be helpful to consider the titles given to Jesus in the biblical text. As we ponder these titles we can ask what they say to us about who Jesus might be for us.

The Greek word Christos is simply the equivalent of the Hebrew word masiah (anointed).  This word has a variety of meanings that refer to one who is anointed.  During the period following the Jewish Babylonian exile, the term Messiah took on a new identity.  It expressed the hope that Davidic monarchy might be restored (Hag 2:20-23; Zech 9:9-10; 12:7-13:1). Even here there seems to be some diversity of understanding.  The community of Qumran, the home of the Dead Sea Scrolls, appears to have expected two "anointed ones," one apparently royal and the other priestly, with the latter outranking the former. While there are a variety of images available the primary focus was on the deliverance of the Jews from Gentile domination.

So, when we speak of Jesus as the Christ, this tradition stands in the background.  It needs to be pointed out that Jesus rarely if ever used the term for himself.  He seems to have preferred to use the rather cryptic (and apocalyptic) term of Son of Man.  The strongest statement of Christ's messiahship comes in the accounts of Peter's confession at Caesarea Philippi (Mt 16:16; Mk 8:29; Luke 9:20), but even here the meaning of the confession is muted, and Jesus tells them to keep this testimony quiet (Mt. 16:20).

If the term is used cautiously regarding Jesus’ pre-Easter existence, in the accounts of Jesus’ post-Resurrection appearances, we see Jesus explicitly claiming the title (Luke 24:26, 46), and Paul is very clear in his attribution of the title to Jesus. The title of Christ became so popular in the early church that the church began to refer to him as Jesus Christ. Thus, it is the resurrection that serves to finally fill out the messianic implications of Christ's mission (Acts 2:31-32, 36).

Finally, we must face the fact that as Messiah, Jesus did not fulfill the expectations of first-century Jews, who were looking for someone much different from what Jesus represented.  But, in light of the Easter event, Jesus supremely fulfilled God's intentions for the anointed one.  Instead of proclaiming a nationalistic vision, the one we see in the New Testament is that of a messianic reign that ranged far beyond that of the physical realm as we understand it.
Son of Man/Son of God

The phrases Son of Man and Son of God are sprinkled widely throughout the New Testament. In the Synoptic Gospels Jesus continuously uses Son of Man to refer to himself. The second term has carried much meaning for Christians and it is the one that appears in the Good Confession. The meanings of these terms are not always clear to us, nor are their implications for our belief systems.

The phrase "son of man" has its roots in the prophetic utterances of Ezekiel (also used in Daniel).  Here the numerous references to the prophet as "son of man" (ninety in all), are suggestive of representative humanity. The idea is developed more fully in the apocalyptic theology of Daniel. The figure of one "like a son of man coming with the clouds of heaven," one who is worshiped by all people (Dan. 7:13-14), has a much different connotation. The developments in Daniel are probably more closely related to the usage of Jesus than are those of Ezekiel. Here the Jews may have borrowed from the Hellenistic myth of a primordial or ideal prototypical human being who is a heavenly and pre-existent being. There are ultimately several ways that Jesus used the term, which might reflect both the background in Ezekiel and that in Daniel.
This term Son of God is extremely difficult to understand. Is it a term of divinity or is it simply a statement of a special relationship with God? Paul uses the phrase often in his development of his Christology.  A significant passage in this development is Romans 1:3:

The Gospel concerning his Son, who was descended from David according to the flesh and was declared to be Son of God with power according to the spirit of holiness by resurrection from the dead, Jesus Christ our Lord, through whom we have received grace and apostleship to bring about the obedience of faith among all the Gentiles for the sake of his name, including yourselves who are called to belong to Jesus Christ, . . . (Rom 1:3-6).

It is highly likely that these verses are a pre-Pauline confession of faith in Christ. Here Paul describes the one who by the flesh is the son of David, and thus Messiah, as Son of God, a title given in and through the resurrection.  The title itself has a rich background that would be impossible for us to explore fully. Marinus de Jonge, however, has nicely summarized the various meanings and implications for us in this succinct statement.

When the term "Son of God" was used for Jesus it may therefore have held a wealth of connotations for individual Christians. It is probable, however, that the notions of Messiah / Son of David / Son of God, and wise and righteous man / perfectly obedient servant of God / pious charismatic / son of God, were constitutive for the earliest stages of the Christian use of the term. [Marinus de Jonge, Christology in Context: The Earliest Christian Response to Jesus, Wayne Meeks, trans., (Philadelphia: Westminster Press, 1988), p. 169].

It is also important to note that the title “Son of God,” was an imperial title, reserved for the emperor.  So, in giving that appellation to Jesus, the early Christians were signaling that Jesus, not the emperor was ultimate.  This, of course, had important political implications.

Perhaps the earliest confession of faith for Christians was the affirmation of Jesus as Lord (Rom. 10:9; I Cor. 12:3).  Paul asserts that no one can confess Jesus to be Lord, except by the power of the Holy Spirit (I Cor. 12:3).  Standing behind the confession of Jesus as Lord was the Jewish tradition of using the Hebrew term Adonai in place of the divine name Yahweh. The Septuagint uses the term kyrios as the translation of Adonai, and it is kyrios that serves as the foundation for the Christian confession of faith in Jesus.  Jews of this era, having reserved the term to describe God, refused to call the emperor "Lord," and early Christians also found it impossible to say. Whereas the Jews were seen as a minority, and thus their refusal to signal allegiance could be ignored by the authorities, the same was not true of the evangelistic minded Christians, and thus it set up the possibility for sporadic but at times severe persecutions.

With this Jewish and Old Testament foundation to the Christian confession, we can see that this phrase must have some idea of divinity attached to it. To call Jesus Lord appears to mean that he is being hailed as God, or at least he is being equated with God. The passage that most clearly undergirds this confession is Philippians 2:10-11, which in turn is reflective on Isaiah 45: 23. The hymn, which Paul adapts for his own use, speaks of Christ in this way: “At the name of Jesus every knee should bend in heaven and on earth and under the earth, and every tongue should confess that Jesus Christ is Lord, to the glory of God the Father” (Phil. 2:10-11). This passage asserts most emphatically that we are to confess Christ is Lord.  Isaiah puts it this way:

Turn to me and be saved, all the ends of the earth!  For I am God, and there is no other.  By myself I have sworn, from my mouth has gone forth in righteousness a word that shall not return:  "To me every knee shall bow, every tongue shall swear." (Is. 45:23).

This passage, which speaks of God as savior and Lord, stands behind the early Christian confession of Jesus as Lord and Savior. The equation of the two makes for a strong statement for understanding Christ as the incarnate and divine Lord.

In the prologue of John’s Gospel, we read a soaring reflection on the Word of God, who has become flesh and dwelt among us.  In doing so, the Word reveals to us in a new way of understanding the things of God (Jn. 1:1-14). This sense that the Logos of God is with God in the beginning, and is God, but has now taken flesh to dwell among us, is developed in a bit differently in the Colossian letter, a letter that predates John’s gospel.


He is the image of the invisible God, the firstborn of all creation; for in him all things in heaven and on earth were created, things visible and invisible, whether thrones or dominions or rulers or powers--all things have been created through him and for him.  He himself is before all things, and in him all things hold together. (Col. 1:15-17).

Christ is revelation ("image of the invisible God) and agent of creation ("in him all things in heaven and on earth were created"). It is from texts such as these that the idea of Christ’s divinity/divine status emerges.  These soaring confessions suggest that at the very least, this one is more than simply a human being.

Feminist theologians have raised the possibility of finding Christological significance in the biblical witness to the Wisdom of God, which in the Hebrew Scriptures is consistently portrayed in feminine terms. Paul declares Christ, the one crucified to be the wisdom of God (1 Corinthians 1:24).  If Christ is the Wisdom of God (Sophia), then can we broaden our understanding of the nature of Christ to include male and female, for the God we serve transcends gender – or so we say.  Feminist theologian Elizabeth Johnson writes:

As Sophia incarnate Jesus can be discerned as a coincidence of opposites of every respect: crucified yet glorified; God’s own being yet made flesh; a man yet the prophet and very presence of Sophia herself.  An ancient Christological title is emerging with new dynamism in feminist reflection: Jesus-Sophia, or Jesus, the Wisdom of God. [Elizabeth Johnson, Consider Jesus, p. 112].

The final term that is often ascribed to Jesus in the New Testament and in Christian worship is that of Savior.  It fills our hymnody and it often defines the foundation of our relationship to Jesus and to God.  He is the one who rescues us and restores us to right relationship with God (2 Cor. 5:11-21).  We will look more closely at this when we look at the question of salvation.  But let us suffice to say here, that Jesus is by our confession savior.

For Christians, Jesus is the revelation and reflection of God.  The Preamble to the Design (the Design serves as a constitution for the Disciples of Christ) places Jesus before God.   This isn’t meant to be a statement of priority, but rather is the recognition that for us we must come to understand God in the light of our confession of Jesus.