Crossing the River - Lectionary Reflection for Pentecost 21 A (Joshua) 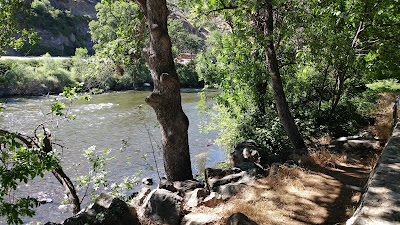 7 The Lord said to Joshua, “This day I will begin to exalt you in the sight of all Israel, so that they may know that I will be with you as I was with Moses. 8 You are the one who shall command the priests who bear the ark of the covenant, ‘When you come to the edge of the waters of the Jordan, you shall stand still in the Jordan.’” 9 Joshua then said to the Israelites, “Draw near and hear the words of the Lord your God.” 10 Joshua said, “By this you shall know that among you is the living God who without fail will drive out from before you the Canaanites, Hittites, Hivites, Perizzites, Girgashites, Amorites, and Jebusites: 11 the ark of the covenant of the Lord of all the earth is going to pass before you into the Jordan. 12 So now select twelve men from the tribes of Israel, one from each tribe. 13 When the soles of the feet of the priests who bear the ark of the Lord, the Lord of all the earth, rest in the waters of the Jordan, the waters of the Jordan flowing from above shall be cut off; they shall stand in a single heap.”

14 When the people set out from their tents to cross over the Jordan, the priests bearing the ark of the covenant were in front of the people. 15 Now the Jordan overflows all its banks throughout the time of harvest. So when those who bore the ark had come to the Jordan, and the feet of the priests bearing the ark were dipped in the edge of the water, 16 the waters flowing from above stood still, rising up in a single heap far off at Adam, the city that is beside Zarethan, while those flowing toward the sea of the Arabah, the Dead Sea, were wholly cut off. Then the people crossed over opposite Jericho. 17 While all Israel were crossing over on dry ground, the priests who bore the ark of the covenant of the Lord stood on dry ground in the middle of the Jordan, until the entire nation finished crossing over the Jordan.

Rivers and other bodies of water play a significant role in the biblical story. Crossing rivers often signifies an important transition in the life of God’s people.  Jacob had his wrestling match with the angel of God at the ford of the Jabbok River, an encounter with the divine on the eve of his reunion with Esau, a reunion that required the crossing of a river (Gen. 32-33). A body of water needed to be crossed so that the people of Israel, led by Moses, could escape slavery (Exodus 14). Each of these stories play a role in God’s ongoing covenant relationship with Israel. The same is true in many ways with the prophets Elijah and Elisha, who called for Israel to remain true to its calling. A crossing of the river plays a role in the passing of the prophetic mantle from Elijah to Elisha (2 Kings 2).

The people of Israel, now led by Joshua, must cross the Jordan to inhabit the land that was given to them by God so that the people could fulfill their covenant responsibilities. As we saw in the preceding reading from Deuteronomy 34, God allowed Moses to climb the mountain and look into the Promised Land. He had led the people across Sinai and served as the mediator between the people and God, as God formed them into a new people, one that was no longer defined by slavery. He did his job, often under significant duress. It would have been nice to cross over into the Promised Land, but that would not be his destiny. Instead, that the responsibility and opportunity to lead the people across the river and into the Promised Land was given to Joshua, Moses’ protégé.

Yahweh said to Joshua “This day I will begin to exalt you in the sight of all Israel, so that they may know that I will be with you as I was with Moses.”  God makes clear to Joshua, that there would be an unmistakable sign of God’s intentions, so that the people would know that Joshua was God’s chosen leader for the people as they entered the land of promise.

I find this passage to be intriguing. When taken together with Deuteronomy 34, it serves as an opportunity to reflect on times of transition, including pastoral transitions. Perhaps it is because that I’m getting closer to retirement age, that this passage speaks to me. There are times when we fill the role of Moses, and other times we take up the role of Joshua. Moses is the one who leads the people to the river, but does not cross over. Joshua, on the other hand, gets to take the community across river and into new opportunities. My sense is that many of us will fulfill both roles at some point in our lives, and so these two readings, one from Deuteronomy 34 and one from Joshua 3  speak to our own experiences with God and the communities we are part of.

While Joshua offers an important word to those moments of transition that we all experience, it also comes to us with a shadow hovering over it. I would be remiss if I did not take note of the implications of the conquest of Canaan, undertaken at God’s behest, under Joshua’s leadership. In this very passage we have a word about ethnic cleansing. God will go before the people of Israel and drive out the inhabitants, so that Israel can take possession of the land. Yes, this may be the land of promise for Israel, but it is not uninhabited land. Here is the biblical foundation for Manifest Destiny. This land which I call home has been depicted as a Promised Land, the inhabitants of which would need to be driven out so that the chosen ones—primarily Europeans—could take possession. We need to acknowledge this reality, and reject it as coming from God. Ethnic cleansing is not to be celebrated, and it cannot be justified on the basis of scripture. Yes, it’s there, clear as daylight, in Joshua, but we must say no to it, and embrace a different vision, one that welcomes the stranger and lives in harmony with the other. That’s in scripture as well. So, as much as I like the basic story of liberation and restoration that we find present in Deuteronomy and Joshua, this part of the story needs to be acknowledged and rejected, so that we do not feel justified in doing the same.

Having acknowledged the shadow that hangs over this passage, what word do we hear that speaks to us? Crossing the river is an act of faith. The people of Israel are camped at the edge of the river. They can see across to the other side. They may have heard stories of dangers ahead, but they’ve also heard that the land is theirs for the taking (Josh. 2:22-24). The one who stands before them as their leader is young and untested. Moses is dead and buried. To cross the river under the leadership of Joshua is an act of faith, but God promises a sign.

Joshua gathers the people to the edge of the river and gives them instructions, as received from Yahweh. They’re to select representatives, one from each tribe, perhaps to serve as a council of elders, as they cross into the new land of promise. They will join Joshua in leadership. Then, Joshua commands the priests to take the Ark of the Covenant and walk ahead of the people. When the priests bearing this Ark reach the water’s edge they are to step into the river. As they do this the waters will part, just as at the sea when the people of Israel escaped slavery in Egypt, so that the people can cross over on dry land. So, at the direction of Joshua, the priests move into the center of the river and stay there until everyone passes through the waters and into the Promised Land.

The symbolism of the Ark of the Covenant is important. It serves as a tangible sign of the presence of God who goes with them. Remember that in the Exodus story, Aaron created a golden calf as a representation of Yahweh. This was not acceptable. The Ark, on the other hand, was not seen as a graven image. It did not provide a physical representation of Yahweh. However, it did serve as a sign of God’s presence in their midst. It was a symbol of God’s leadership, and thus of Joshua’s as well. As they took the journey into the land, they needed to know that they did not go alone.  With this we may sing the third stanza of “Guide Me, O Thou Great Jehovah” (William Williams, 1745).