Disciples of Christ and Baptism - A Reflection 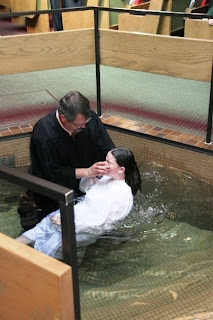 In my previous post I spoke of Disciples sacramental thinking, noting the discomfort with the word sacrament and thus the choice of the word ordinance. Alexander Campbell chose the word ordinance to indicate that Jesus had ordained these two practices as means by which God’s grace was conferred to believers. Campbell could speak of the “ordinances” as being “pregnant institutions filled with the grace of God.” He spoke of baptism as being filled with “special grace” [Royal Humbert, ed., Compend of Alexander Campbell’s Theology, (Bethany Press, 1961), p. 183]. I would agree with Mark Toulouse who notes that Campbell’s use of ordinance rather than sacrament was “more a semantic change than a substantive one.” Unfortunately, over time Disciples, as Mark notes, lost this sense of the “ordinances” serving as means of grace, but Campbell’s understanding of these two signs was reflective of Reformed thinking, and the Westminster Confession “used the word ordinance interchangeable with the word sacrament” [Joined in Discipleship, rev. ed., (Chalice Press, 1997), p. 138].

With this introduction we will now explore in some depth first Baptism and then Lord’s Supper in a separate post).
Baptism


Before we turn to Disciples thinking about Baptism, it would be helpful to take note of some of the important images used by early Christians to Describe what occurs in Baptism.

The church appears to have linked baptism to conversion.  Baptism followed a period of catechetical instruction.  Faith was a strong component preceding baptism, Justin and Gregory of Nyssa both insisted that belief preceded baptism.  Tertullian wrote that "when we have entered the water, we make profession of the Christian faith in the words of its rule." [ Everett Ferguson, “Baptismal Motifs in the Ancient Church," Conversion, Catechumenate, and Baptism in the Early Church, Studies in Early Christianity, vol. 11, Everett Ferguson, ed., (New York: Garland Press, 1993) pp. 202-203.] Cyril of Jerusalem (315-386), in his Lectures on the Christian Sacraments, writes similarly:

After these things, ye were led to the holy pool of Divine Baptism, as Christ was carried from the Cross to the Sepulcher which is before our eyes.  And each of you was asked, whether he believed in the name of the Father, and of the Son, and of the Holy Ghost, and ye made that saving confession, and descended three times into the water, and ascended again; here also covertly pointing by a figure at the three-days burial of Christ.  [Cyril of Jerusalem, Lectures on the Christian Sacraments, F. L. Cross, ed., (Crestwood, NY: St. Vladimar's Press, 1986), pp. 60-61.]

Baptism also served as a sign of repentance.  Following John the Baptist, the church saw baptism as the seal of one's repentance of sin.  Some early fathers saw baptism initiating a life of penitence.  Cyril of Jerusalem provided a forty-day period of penitence before baptism to allow the candidate to put off their sinful ways.  Many early baptismal rites included a ceremony of exorcism that included a renunciation of the devil.

Borrowing from the rites of purification and cleansing in the Old Testament, the early church also saw baptism as a rite of cleansing. One can also find many references in the New Testament to the cleansing motif.  Ephesians 5:26 speaks of the church being saved by the "washing of water." Titus 3:5 speaks of salvation coming through a "washing of regeneration." Even the act of entering waters is symbolic of cleansing and purification. Yet the cleansing was not external but internal. Tertullian wrote:  "The flesh is washed, in order that the soul may be cleansed." The Fathers, including Cyprian and Gregory of Nyssa, attributed the cleansing power of baptism not to the waters but to the Spirit that indwells them. [Ferguson, "Baptismal Motifs," pp. 356-357.]

Following Romans 6, the Fathers understood baptism to be an act of burial. Even as Christ lay in the tomb three days, so the believer is buried in the waters of baptism as a sign of one's death to sin and the devil. One then rises from the waters to new life. [Ferguson, "Baptismal Motifs," pp. 358-359.] There is also a sense that baptism brings victory over the devil since death is seen as Satan's domain. Baptism becomes a means of deliverance from Satan's power, being symbolized through the connection of the rite of exorcism to baptism. The Fathers also saw Baptism as expelling demons from the candidate.

Connected with the motif of death was the motif of new life. Even as one was buried in the waters of baptism, baptism also served as a sign of resurrection and new birth.  In the second century, the fathers pointed to John 3:5 to define baptism as the means of new birth. Phrases such as new birth, second birth, and the womb were often used in connection with baptism. They connected new birth to other parts of the baptismal rite, including the stripping off one's clothes before baptism, as a sign of the stripping off sin.  The act of entering the waters unclothed served as a sign of birth.  Following their baptisms, the newly baptized received baby food—milk and honey—while taking their first communion. They saw this act as a sign of new birth. [Ferguson, "Baptismal Motifs," pp. 359-362].

Baptism in the Stone-Campbell Movement

Barton Stone and Alexander Campbell are numbered among the founders of the Disciples, but they were not of one mind on baptism. Both men believed that the New Testament form of baptism was immersion of believers and that baptism carried with it the remission of sins, but they disagreed as to its necessity. It needs to be remembered, however, that these views of baptism were forged in the heat of a battle with Baptists—regarding baptism and entrance into the community—and with paedo-baptists, who emphasized the baptism of infants as a sign of inclusion into the covenant. This perspective colors the perspective, and some of the things said early in Campbell's career would be modified later in his career.

Alexander Campbell taught that baptism served as the means by which the penitent believer in Christ received assurance of remission of sins. He believed that conversion was a process that included belief, repentance, and baptism, which led to remission of sins and the renewal of the Spirit --as taught (clearly in his mind) in Acts 2:38. Campbell writes in The Christian System:

Baptism is . . . designed to introduce the subjects of it into participation of the blessings of the death and resurrection of Christ; who "died for our sins," and "rose again for our justification."  But it has no abstract and deep and unfeigned repentance before God, neither immersion in water, nor any other action, can secure to us the blessings of peace and pardon.  It can merit nothing.  Still to the believing penitent it is the means of receiving a formal, distinct and specific absolution, or release from guilt.  Therefore, none but those who have first believed the testimony of God and have repented of their sins, and that have been intelligently immersed into his death, have the full and explicit testimony of God, assuring them of pardon. [Compend of Alexander Campbell's Theology, pp. 195-96].

Campbell saw baptism as part of an ongoing process that begins with God's grace, includes the death of Christ, the giving of the Spirit, "faith, repentance and baptism, INSTRUMENTAL causes," and finally eternal life, which he called the final cause. [Campbell, Millennial Harbinger, quoted in Richard B. Harrison, "Early Disciples Sacramental Theology:  Catholic, Reformed, and Free," in Classic Themes in Disciple Theology, Kenneth Lawrence, ed., (Fort Worth: TCU Press, 1986), p. 59]. Baptism wasn’t a "pardon-procuring" rite; it was a "pardon-certifying rite" [Compend of Alexander Campbell’s Theology, pp. 200-1]. Finally, although he placed strong emphasis on the proper mode (immersion) and proper candidate (believer), when pressed, he admitted that there were true Christians who had a mistaken view of baptism. In his "Lunenberg Letter," he refers to them as the pious unimmersed, those who had believed, repented, and had obeyed God "according to the knowledge of his will." [Leroy Garrett, Stone-Campbell Movement, (Joplin, MO:  College Press, 1981), p. 194].

Stone’s differences with Campbell were largely ones of emphasis. Writing a year prior to the union of Disciples and Christians in 1832, Stone voiced his concern with Campbell's reluctance to have fellowship and communion with the "unimmersed."  Stone would not separate entrance into heaven from enjoyment of the kingdom of God on Earth.

We believe, and acknowledge, that Baptism is ordained by the King as a means for the remission of sins to penitent believers; but we cannot say that immersion is the sine qua non, without maintaining the awful consequence above, and without contradicting our own experience.  We therefore teach the doctrine, believe, repent, and be immersed for the remission of sins;' and we endeavor to convince our hearers of its truth; but we exercise patience and forbearance towards such pious persons, as cannot be convinced.  [Barton Stone, "Christian Union," in Christian Messenger, 5 (August 1831):  181].

Stone's concern for union, along with his experience of fellowship with Christians of various traditions, prevented him from taking a firm line on the necessity of immersion. He questioned whether the church could rightfully withhold the "privileges of the kingdom," including the right to the Table, from the unimmersed. After all, immersion by itself did not make one a Christian. As he noted, perhaps with a snicker, “We have seen many unimmersed possess the spirit of the kingdom; and we have seen many immersed destitute of it.  To receive the latter, and to reject the former, we cannot view divine.” [Christian Messenger, 184-85].

The position that Stone took on this issue best describes the current Disciple position, for Disciples today practice immersion upon profession of faith, but they don’t require this for membership. If one happens to have been baptized in another tradition, then that is considered sufficient. In large part this stance came about as Disciples recognized that if there are believers in other traditions that aren’t immersed, then we cannot, without undermining our ecumenical relationships, require a person to be rebaptized without casting an aspersion on the faith of another.


As for Disciples today, we carry some of the earlier beliefs and practices, but they have been reframed and enhanced by engagement with the ecumenical movement and with the liturgical renewal movement. Our thinking has been challenged and enhanced because of Disciple involvement in such efforts as the process that led to the Baptism, Eucharist, and Ministry Document, which as Thomas Best notes, “reminded us of baptism’s strong social as well as personal dimension, and that baptism, as a sacrament of unity is unrepeatable” [Thomas Best, “Disciples and Baptism,” in Chalice Introduction to Disciples Theology, Peter Goodwin Heltzel, ed., (Chalice Press, 2008), p. 145].  While Disciples have long practiced open membership, there is still a commitment to believer's baptism by immersion.
Email Post
Labels: Alexander Campbell Baptism Barton Stone Christian Church (Disciples of Christ). Disciples Theology Sacraments Theology