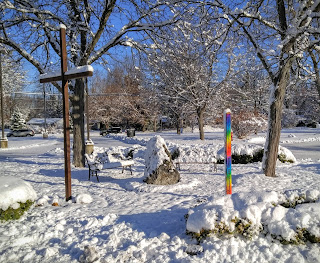 What follows is an article posted by Edgar Dewitt Jones, once the pastor of Central Woodward Christian Church (Disciples of Christ). I now serve that church, though it exists in a different location. Jones was an important figure among the Disciples in the first half of the 20th century. From my reading of him, his heart was tuned to the call to peace, but he also found himself supporting in one way or another the American war effort in both World Wars, though by World War II he was much more circumspect. I was going through a box of his columns (he wrote a daily column for many years for the Detroit News titled "Successful Living,"), and found this one, which I think makes some sense. It was written during World War II (the clippings are not dated, but I'm guessing in 1943). I invite you to ponder his words:

An eminent prelate in Germany describes the churches there as crowded with worshipers and cites this as one evidence of a return to religion. Other observers have said practically the same thing and predicted a world-wide revival following the war.

Like predictions were made during the first World War, but failed to come true. It is natural when war is in progress and so many human beings are slain, wounded, and missing, that anxious relatives and friends resort to religious services. It would be strange if it were otherwise.

It is times of constructive peace orderliness, and goodwill which make the lasting contribution to religion; not war, violence, and bloodshed. A revival of interest in religion may follow the war --- let us hope it does; but if so, it will be despite the war, not because of the war.

Once the war is over, among the fighting men who are so fortunate as to return home a reaction against organized religion may be expected. The question will be asked, "Why after nineteen hundred years of preaching and teaching, is religion powerless to prevent war? Why are Christianity and Judaism so impotent despite beautiful temples of worship and millions invested in their institutions?

That such criticisms are not wholly fair or warranted is beside the point; they are real, not imaginary, and they cannot be lightly brushed aside. Religion is a vast solace in times of suffering and sorrow, for which we should be deeply grateful, yet until religious institutions are strong enough and religious enough to build a better world, churches, synagogues, and missions will not receive the enthusiastic support and devotion their ideals and principles deserve.

Long ago the Founder of Christianity said, in substance, "Why call be Lord, Lord, and do not the things I teach you to do? That is one of the most pertinent questions ever put to his followers, and until it is answered rightly, injustice will flourish and wars continue.  (Successful Living, Detroit News, ND).

It is near the end of Advent, a season of waiting for the realm of God to come in its fullness. Christmas is near at hand, when we will celebrate the coming of the prince of peace. My sense is that religious communities are weaker today than they were in 1943. There was something of a revival in the 1950s, but my sense is that religion became for a time something like comfort food. By the 1960s that was beginning to wear off. Nonetheless, Jones' commentary is worth pondering today as it was in the midst of WWII -- How might the followers of Jesus live into Jesus' calling?
Email Post
Labels: Edgar DeWitt Jones Jesus justice peace Religion War World War II

Jack Sullivan, Jr. said…
Thank you for posting Jones’ work. I wonder if he would consider today’s religious groups to be “strong and religious” enough to offer credible alternatives to the war-prone, injustice-infused madness of our day. Seems so many of us have not yet accepted the challenge to do so even as it is an inescapable component of following Jesus.
8:35 PM

Robert Cornwall said…
Jack, I think he would find us even less "strong and religious," but perhaps not. He came from a different era, when the churches seemed strong (and Central Woodward was indeed strong then), but perhaps he might sense a different kind of strength today.