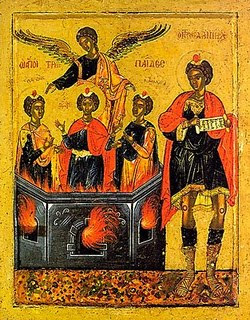 Today the Bible Study I lead begins a new series focusing on the Book of Daniel. I've never led a study on Daniel, but the group decided it would be an interesting subject. As I have been preparing for the study, knowing that the book is divided into parts --- the first part sharing what some scholars call "Court Tales" (Daniel 1-6) and part two being the apocalyptic visions (Daniel 7-12) --- we will need to ask a number of questions of the book. The first question we must address is the role God plays in the book. How is God sovereign? It is an intriguing question for us to address in our own day. In terms of interpretation, there are two basic paradigms. An older paradigm suggests that the message of Daniel is that one can remain faithful while participating in life in a foreign land, much as Esther did. On the other hand, there is a more recent post-colonial vision that suggests that this is a story of resistance. Could it be that the book will speak differently in different contexts?

We will look at chapter one today, a chapter in which we are told of Nebuchadnezzar's capture of Jerusalem and its king, and the beginning of an exile. It is in this context that we meet Daniel and his three friends, who, according to the story, are brought into a three-year training program so they can serve in the king's court. Here's where it gets interesting. Daniel rejects the food provision taken from the king's own table. Daniel asks that they be fed only a diet of vegetables not the meat and wine of the king. The question raised here is whether this is an act of resistance, a drawing of boundaries.

In that context, I'll ask a question. What might Daniel's story say to us about cultural accommodation? I will confess that I live pretty comfortably in this cultural context. Does Daniel offer a different way?
Email Post
Labels: Accommodation Bible Study Daniel Resistance