Forgiveness as a Theological Construct -- A Reflection 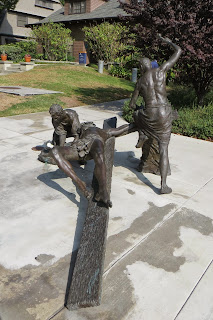 Note: What follows are the notes I wrote up for an educational moment that follows the worship service at Congregational Church of Birmingham, where I am preaching. Pastor Louise Ott and I traded pulpits so she and the Stephen Ministry team at the two congregations could lead the service at Central Woodward Christian Church. They will do the same next week at CCB, while I will preach the sermon (or a facsimile of it, completing my series of sermons from James, next Sunday at CWCC).

I have been asked to address the question of “Forgiveness as a Theological Construct.” This is not an easy task, because I must wrestle with my own experience with forgiveness and the lack thereof. When it comes to developing a theology of forgiveness I must start with the prayer recited each Sunday as I gather at the Lord’s Table. As we recite the Lord’s Prayer, we ask God to “forgive our debts as we forgive our debtors.” Some congregations use the trespasses or sins instead of debts, but whatever word we use it speaks of our obligations to God and one another.  [On this see my Ultimate Allegiance]. Theologian Joe Jones writes that “To have sinned against someone is to have violated an obligation to that person and therefore to fail to give the other what is the other’s due. Herein the grammar of debts, obligations, dues, and sins are intertwined.” [Jones, A Grammar of Christian Faith, p. 580].

When it comes to forgiveness, Jones believes Christians should not keep a score on those debts owed, even as God does not keep score on the debts and obligations we owe. To forgive such debts, is to provide the opportunity for both parties to start anew in their relationship. The prayer we offer, however, links our forgiveness to our willingness to forgive the other. With that said, I must confess that there are people in my experience whom I find difficult to forgive. I also know that this may be true for some when it comes to their relationship with me.

Our task this morning is to construct a theology of forgiveness, and to do this we start with the love of God. It is out of God’s love that grace emerges, and grace is the foundation of reconciliation. Reconciliation is the process by which broken relationships are restored, whether that is the Divine-human relationship or our interpersonal relationships. In that regard, Paul writes words that have long spoken to me:

So if anyone is in Christ, there is a new creation: everything old has passed away; see, everything has become new!  All this is from God, who reconciled us to himself through Christ, and has given us the ministry of reconciliation; that is, in Christ God was reconciling the world to himself, not counting their trespasses against them, and entrusting the message of reconciliation to us. (2 Cor. 5:17-19).

We might ask whether this process of reconciliation involves acts of atonement. While atonement theories aren’t a popular topic in progressive Christian circles, because they can lead to the idea that God requires blood in order to forgive, and that God prefers human blood, and among humans, it’s God’s son that proves to be most effective sacrifice. It’s understandable that many of us have problems with Anselm’s satisfaction theory and the penal substitution theory that was embraced by the Reformers, but if you look at this from a certain vantage point, these theories are make sense.  They are attempts at building bridges between offended parties and the offenders, so that broken relationships can be restored. Paul seems to suggest that Jesus is that bridge, with the cross at its center.

I don’t believe that Jesus’s death on the cross fulfills God’s need for satisfaction or to appease God’s wrath. But, I do believe the cross fits into this conversation. Perhaps Deanna Thompson, a Feminist Lutheran Theologian of the Cross, can help us here. She writes:

Forgiveness that comes from Christ suggests that if we are implicated in the violence of the cross, we are also in some way responsible for it. Contained within this judgment is the hope that can rise from taking responsibility for living differently, in embracing the vision offered us in the forgiveness and faith given through our encounter with the risen Christ. God's justifying, saving work is not separate from God's work in and through creation; therefore, we are freed to live a justified, hopeful existence where we are in the world.  [Deanna A. Thompson. Crossing the Divide (Kindle Locations 2004-2007). Kindle Edition.]

If we look at the cross in this way, perhaps we can better understand Jesus’ words from the cross: “Father, forgive them; for they do not know what they are doing.” (Luke 23:34). Although these words do not appear in the oldest of our manuscripts, they fit Jesus. These words match those of Stephen as he is being stoned death for his witness to Jesus: “Lord, do not hold this sin against them.” (Acts 7:60). Such words of forgiveness open new vistas and opportunities. Surely, they knew what they were doing, but God, in God’s love, is willing to build that bridge of forgiveness. But to live into this act of forgiveness, it must come from somewhere beyond our selves. So, we read in Ephesians 4:

Put away from you all bitterness and wrath and anger and wrangling and slander, together with all malice, and be kind to one another, tenderhearted, forgiving one another, as God in Christ has forgiven you. Therefore, be imitators of God, as beloved children, and live in love, as Christ loved us and gave himself up for us, a fragrant offering and sacrifice to God. [Eph. 4:31-5:2].

There is much more to be said here, but once again we see the connection between God’s forgiveness and grace, mediated to us through Christ, which enables us to forgive others.

If this is our foundation, then we must think about putting this in practice. We have heard powerful stories about acts of forgiveness, but it requires a response from the one who offends if there is to be reconciliation. Consider the parable of the unforgiving servant. He went before the king and asked for his debt, which was unrepayable to be forgiven. The king agreed. That is, until this servant refused to forgive the debt owed to him, though it was imminently payable, given time. So, when the king heard about this, the servant that owed him an unpayable debt suffered the consequences. Once again, we see the reciprocal nature of forgiveness. If we are forgiven, we should forgive others.

If we are to develop a theology of forgiveness, it will need to be understood as a way of life, or as theologian Joe Jones puts it, a “habit of the heart.” Jones writes of forgiveness:

To be disposed toward forgiveness is to be inclined—as a habit of the heart—to not keep moral score on others, to not search for the moral faults of others, to not hold debts and sins against others, to not demonize one’s debtors and afflicters. Such a disposition is possible only when one knows the forgiving love of God for oneself and for one’s neighbors, which includes those who have sinned against us” [A Grammar of Christian Faith, p. 585]


L. Gregory Jones would agree with Joe Jones, suggesting that forgiveness as a way of life is “shaped by friendship with God and others” [“Forgiveness,” in Practicing Our Faith, 2nd ed., p. 132].

Greg Jones speaks of six steps in the process of forgiveness, which I think might be helpful to consider.

1.   We must have a willingness “to speak truthfully and patiently about the conflicts that have arisen.”

2.   We then “acknowledge both the existence of anger and bitterness and a desire to overcome them.”

4.   We must then “recognize our own complicity in conflict, remember that we have been forgiven in the past, and take the step of repentance.”
a.   In saying this Jones doesn’t want to ignore the difference between victim and victimizer, but in many cases it’s important that we resist the temptation to blame others and exonerate ourselves.
b.   He points us to the words of Jesus who reminds to remove the plank in our own eye before trying to remove the speck in the eye of the other person (Mt. 7:1-5)
c.   We might see this as an act of checking on our own complicity in disputes and violations.

5.   We should make a “commitment to struggle to change whatever caused and continues to perpetuate our conflicts.”
a.   This involves working to restore broken community, remembering that forgiveness and justice are related. This often starts with prophetic protests “wherever people’s lives are being diminished or destroyed.”

6.   We end the process by confessing “our yearning for the possibility of reconciliation.”
a.     Jones writes: “Sometimes a situation is so painful that reconciliation may seem impossible. At such times, prayer and struggle may be the only imaginable options. However, continuing to maintain reconciliation as the goal—even if this is ‘hoping against hope’ for reconciliation in this life—is important because it reminds us that God promises to make all things new.”  [Practicing Our Faith, pp. 136-137].

This leads us back to 2 Corinthians 5, and the ministry of reconciliation, which has been entrusted to us.  That ministry is rooted in God’s love, which is always seeking reconciliation and restoration of the divine-human relationship that is so often expressed in broken interpersonal and inter-community relationships.