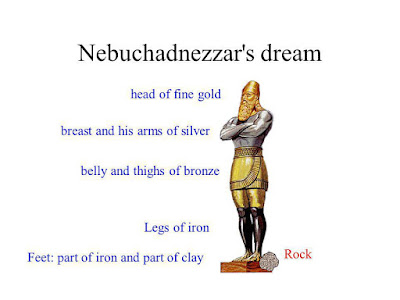 Today our Bible Study group will work through Daniel 2. In chapter 1 we encountered four Jewish exiles living in Babylon, The four were trained for service in the king's court. All were gifted, but one among them--- -Daniel---had the added ability to interpret dreams. As with Joseph before him, that will come in handy when the king has a bad dream and needs it interpreted. This particular dream features a statue composed of four metals---gold, silver, bronze, and iron---the feet of which is made of a mixture of iron and clay. In the dream, which Nebuchadnezzar wants to have both recited and interpreted (he seems a bit paranoid about being overthrown). Interpreting is one thing, reciting an unrevealed dream on pain of execution is another. All is lost until Daniel gets wind and is brought in to both reveal the dream and an interpretation (though both are gifts of God and not a result of his own powers).

The interpretation is itself ambiguous, lending itself to numerous interpretations over the years. These interpretations depend in some way to when the story is dated. For our purposes, I follow the scholars who suggest a Seleucid provinence. It might not be as recent as Antiochus IV, but is of the second century. What is key, I believe, is Daniel's claim that this dream is God's gift to Nebuchadnezzar, allowing the king to see the future. While his own rule appears safe, no empire is eternal. That is, except for one, that is the one symbolized by the rock that strikes the weakened feet of the divided empire (Alexander's successors?)

Daniel raises an important question, and that has to do with divine sovereignty. Now, I come to this conversation with a view influenced by Open Theism. I don't believe that God determines all that occurs in history. I don't read the prophetic moments in scripture in such a deterministic way. At the same time, there are lessons here that should be learned. That lesson is the one revealed in the dream and interpretation. No empire is eternal. It is a word we should consider in our day. Might this dream be a warning to us, as we see the United States show signs of decay and declining power?  Could our embrace of nationalism (as opposed to patriotism) be a sign of such decline?

Nebuchadnezzar may have been spared, but his successors might not. Cyrus might reign on high, but his empire would be pushed aside by Alexander. While Alexander achieved immense power in a short amount of time, his empire quickly devolved into rival states. My sense is that the author had these rival empires, especially the Ptolemaic and Seleucid kingdoms in mind. In time they would fall to Rome, and Rome itself would fall. Through it all, God remains true to purpose, and God's realm does as well.

This is only one person's reflection, but what might Daniel 2 say to us today?  As you contemplate this question, consider Daniel's prayer after receiving the necessary information from God concerning the dream.

“Blessed be the name of God from age to age,    for wisdom and power are his.21 He changes times and seasons,    deposes kings and sets up kings;he gives wisdom to the wise    and knowledge to those who have understanding.22 He reveals deep and hidden things;    he knows what is in the darkness,    and light dwells with him.23 To you, O God of my ancestors,    I give thanks and praise,for you have given me wisdom and power,    and have now revealed to me what we asked of you,    for you have revealed to us what the king ordered.”  (Dan. 2:20-23)
Email Post
Labels: American Empire Daniel Divine Sovereignty Empires Nebuchadnezzar Reflection