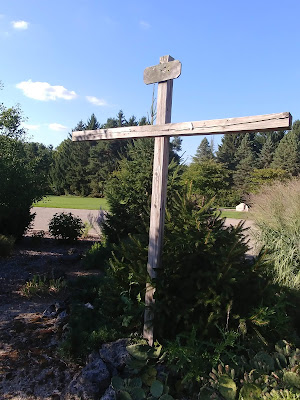 
In times past, we Disciples often spoke of being part of “The Restoration Movement.” This label has come down to us from Alexander Campbell who wanted to “restore the ancient order of things.” He wanted to restore the church practices of the first century because he believed that things were purer back then. You might call that nostalgia for the past. That’s not surprising, because there’s a human tendency to think that life was better back then than it is now. That’s why we still watch reruns of  Leave It to Beaver and Father Knows Best, and if you spend any time on Facebook, you’ll discover that, at least among my peers, the 1970s was a golden age. They weren’t for me, but I get it!

You might be wondering why I’m bringing up nostalgia and the Restoration Movement. Well, reading our passage from James got me thinking about golden ages for the church. You see, James was writing to churches that were experiencing a bit of conflict. If we think we have had conflict in this church, well, these churches James oversees have us beat by a long mile.

Before we get to the conflict, however, James has a question for us: “who is wise and understanding among you?” Just as he did at the beginning of the chapter, he directs his question to the teachers and preachers in these congregations. First he addressed the use of the tongue, and now he tells these church leaders to “show by your good life that your works are done with gentleness born of wisdom.”

When it comes to wisdom, James draws a line between wisdom from above and wisdom from a place that is “earthly, unspiritual, devilish.” Here’s where things get interesting! Apparently, according to James, the conflicts and disputes that were tearing apart their community came from the “cravings that are at war within you.”

Even though the fruit of wisdom is peace, they seem to be at war with each other. In fact, it seems that they might have been settling their disputes by murdering each other. Yes, it’s possible Christians might have been murdering other Christians. While James could be speaking metaphorically, we can’t be sure!  So, maybe the first century wasn’t a golden age for the church that needs to be restored!

We may have our differences as a church. We might even raise our voices with each other on occasion. But, last I knew, no conflicts or disputes have been solved by way of murder.

So, what might James want us to hear? What does it mean to be wise and understanding? We might start by remembering that conflicts and disputes that disrupt the church are products of a wisdom from below, which is marked by envy and selfish ambition. These often lead to disorder and wickedness.

James wants us to embrace a different kind of wisdom. This is the  kind of wisdom that leads to a pure and undefiled form of religion. This kind of wisdom is demonstrated through the way we live our lives before God.

Scholars have long recognized that James’ letter is rooted in the Jewish Wisdom tradition. It has similar qualities to books like Proverbs and the Wisdom of Sirach. It’s quite likely that James knew these books, including the words of Sirach, whose writings appeared in the second century BCE, and who helps us know what true wisdom is like:


1 All wisdom is from the Lord,
and with him it remains forever.
2 The sand of the sea, the drops of rain,
and the days of eternity—who can count them?
3 The height of heaven, the breadth of the earth,
the abyss, and wisdom—who can search them out?
4 Wisdom was created before all other things,
and prudent understanding from eternity.
6 The root of wisdom—to whom has it been revealed?
Her subtleties—who knows them?
8 There is but one who is wise, greatly to be feared,
seated upon his throne—the Lord.
9 It is he who created her;
he saw her and took her measure;
he poured her out upon all his works,
10 upon all the living according to his gift;
he lavished her upon those who love him.  (Sirach 1:1-10)


Yes, according to Sirach “all wisdom comes from the Lord.” It’s a gift from God that brings blessing to all who love God. And as the Psalmist declares happy are those persons whose “delight is in the law of the Lord, and on his law they meditate day and night” (Psalm 1:1-2). In the Jewish tradition God’s wisdom can be found revealed in the Law.

So, “who is wise and understanding among you?” As we seek to answer that question, it’s clear that for James, the brother of Jesus, that wisdom tends to be practical. It comes from doing and not just hearing. For James, the way we live is more important than what we know. That doesn’t mean that James is anti-intellectual or against education. It’s just he believes the wisdom of God leads to right behavior.

As I reflected on this passage and its embrace of wisdom that is not marked by envy and ambition, I thought about its sources. Where do we learn this kind of wisdom? That question led me to the character of Boothby, who appeared in both Star Trek: The Next Generation and Star Trek Voyager.  Boothby is the groundskeeper at Star Fleet Academy. He had that job back when Captain Picard was at the Academy, and he was still there when Wesley Crusher went to the Academy. He may have been only the groundskeeper, but he was also a mentor and a guide for generations of cadets, including Picard and Captain Janeway.  In Picard’s mind, Boothby "is one of the wisest men he has ever known." His wisdom, which he shared with cadets, came from his observations of life. Apparently it wasn’t the professors who influenced Picard the most.  It was the gardener. I expect that we all have someone like Boothby, who has shared wisdom with us; someone like Boothby whose situation in life is humble, but whose wisdom is profound.
h

So, what is this wisdom that comes from above and is a lived wisdom? James lists seven attributes: “Wisdom from above is first pure, then peaceable, gentle, willing to yield, full of mercy and good works, without a trace of partiality, or hypocrisy.” Did you notice a similarity between these attributes and Paul’s list of the fruit of the Spirit. The lists might not be exactly the same, but they do overlap. That’s not surprising because in Scripture, Wisdom and the Spirit are often connected. If we embrace these attributes of Wisdom, then the Spirit will be upon us, and we’ll experience God’s peace.

The other evening I participated in a celebration of the International Day of Peace. It was sponsored by the City of Troy and the Troy-Area Interfaith Group. And as I wrote my prayer for the event, I noted that peace can be elusive. We pray for peace, but it seems as if our world is always experiencing some form of conflict. It’s tempting to give up on achieving peace, and yet, according to James, peace is the goal of wisdom. James begins with the church and invites the church to embrace God’s wisdom, so that we can move beyond our conflicts and disputes to experience the peace of God, which surpasses all understanding.

As James invites us to embrace the wisdom of God, I’m drawn to the call that Jesus issues to us: “Blessed are the peacemakers, for they will be called the children of God” (Mt. 5:9). I don’t know about you, but I’d like to be called a child of God! I realize this isn’t an easy task, but it’s not an impossible one. Perhaps the key is found in the final verse and a half of our reading. James tells us to first “submit yourselves therefore to God.” Then, he tells us to resist the evil one, because if we resist the evil one, he will flee from us. Finally, and what is most important, “draw near to God, and he will draw near to you.”  In this there is a pathway to peace.