Pure and Undefiled Religion - A Sermon for Pentecost 15B (James 1) 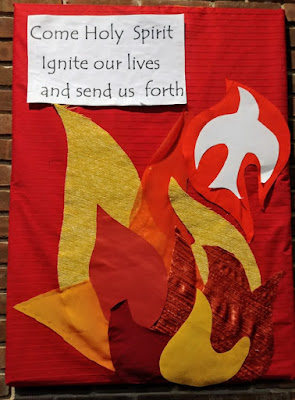 
What better time to begin a series of sermons based on the Letter of James than Labor Day Weekend? The reason why I say this is that James is best known for declaring that “faith without works is dead,” and Labor Day is all about honoring those who work.

In case don’t know James, let me introduce you to him, because we’re going to spend time with his letter over the next six weeks. I have to begin with a caveat. You see, like many books of the Bible, we don’t know for sure the identity of the letter’s author. Here’s what we know for sure. In verse 1 of chapter 1, James introduces himself to us as “James, a servant of God and of the Lord Jesus Christ.” So who is this James, who serves God and Jesus? After all, there are several people in the New Testament named James. There is James the brother of John, and James the Son of Alphaeus, along with a few others. The person who most likely fits the story is James, the Brother of Jesus, or at least someone who writes in his name. As for me, I’m going with James, Lord’s Brother.  Since this James was martyred in the year 62, this could be one of the oldest documents in the New Testament.

What we know about James is this. He was well-regarded by his community. He was the leader of the Jerusalem church after the Twelve were dispersed. He was most likely a Torah-observing Jew as well as a follower of Jesus, who may have been his brother. He also had a few run-ins with Paul, which is one of the reasons we don’t spend as much time with his letter as some of Paul’s.

According to the letter, this James believed that the Torah is the word of Truth that saves. He also believed that Torah is a gift of God. As a Torah-observing Christian Jew, James was concerned about proper behavior and compassion for one’s neighbors. Everything we read in James is rooted in Judaism. This is an important reminder that we as Christians are rooted in the Jewish faith. We may be New Testament Christians, but the Christians of the New Testament looked to the Hebrew Bible for guidance.

Like I said at the beginning, James is known for his declaration that faith without works is dead. That declaration has made him unpopular in some circles. Martin Luther, for instance, called this letter an “epistle of straw” that didn’t preach the gospel. Luther had his reasons for his critique of James that are rooted in the Reformation, but it also reflects a Protestant tendency to judge everything by Paul. Since Paul focuses his attention on grace, telling his predominantly Gentile flock that we are saved by faith and not works, James comes off poorly. But I think we misunderstand James if we try to make him fit with Paul. The best thing we can do is listen to both James and Paul and learn what it means to be a Christian from both of them. Paul had his reasons for emphasizing grace. James had his reasons for emphasizing ethics. We need both if we’re going to follow Jesus!

The word James wants us to hear, I believe, is that the Christian life is an ethical life. In other words, if we claim to follow Jesus then we should walk the talk. The way James puts it: God has given “us birth by the word of truth, so that we would become a kind of first fruits of his creatures.”  Therefore, let us not simply be hearers of the word, but what is more important, let us be doers of the word.

Last Sunday I spoke about the trend in our society toward being  “spiritual but not religious.” People are choosing spirituality over religion, we’re told, because institutional religion tends to be negative and hypocritical. I remember being in a room full of Disciples clergy. Diana Butler Bass was speaking. It was back when she was writing Christianity after Religion. She took a poll of the clergy. She asked how many of us liked the word spiritual and how many of us liked the word religion. Most raised their hands in support of the word spiritual. Very few liked the word religion. Why abandon the word religion? Because it has negative baggage. It’s linked to institutions and hypocrisy. If clergy don’t like the word religion, you can understand why the general population doesn’t like the word.

Maybe James was dealing with a similar problem in the first century when he offered this important definition of true religion: “Religion that is pure and undefiled before God, the Father, is this: to care for orphans and widows in their distress, and to keep oneself unstained by the world” (vs. 27). In other words, true religion, the kind of religion God approves of, is defined by compassion and holy behavior. All of this is rooted in God’s “generous act of giving,” for God is the giver of “every good and perfect gift” (KJV). Yes, God is a generous God. There even might be a stewardship sermon buried in this passage.

This generosity on God’s part should lead to compassion and holiness. He starts, interestingly enough, with the way we use our tongues. He suggests that we learn to bridle them. Not everything that can be said, should be said. Isn’t that a timely topic? I won’t say much more about the use of our tongues this morning, because we’ll be returning to the topic in two weeks, when we get to James 3 and James’ word about taming the tongue, which according to the letter can be a dangerous weapon.
Like I said before, this letter reminds us that our faith, the Christian faith, is deeply rooted in Judaism. We may forget our origins, but there’s nothing in this letter that departs from these Jewish origins. It’s good to remember that Jesus never left Judaism. Neither did Paul, though he focused his attention on reaching Gentiles for Jesus. James on the other hand, remained behind in Jerusalem, and lived as a Christian Jew. The kind of religion that James preached and apparently embodied, reflects these Jewish origins, including the call for compassion for the orphan and the widow, and the call to live a life of holiness.

The word given here is this: as followers of Jesus, we’re to embrace a form of religion that is “pure and undefiled before God.” This form of religion is God’s gift to us. It is an expression of our “birth by the word of truth.”  This Word, according to James has been implanted in us and it “has the power to save our souls.” This Word is the Torah, the Law, which according to Jeremiah has been written on our hearts so that we might be God’s people (Jer. 31:33). This is the Law of liberty that saves us, so that we can live fully in God’s presence, as the first fruits of God’s creatures.

Here’s the thing; if we’re to be God’s people, then, according to James, we must not be just hearers of the word, we must be doers of the word. The Word has already been placed within us, setting us free to live lives of compassion and holiness. We can start living out this calling by  being quick to listen, slow to speak, and slow to anger. After all, this pure religion that honors God begins with our ability to “bridle” our tongues, lest we deceive ourselves and engage in a worthless form of religion (vs. 26).

The tongue plays an important role in this conversation, especially when it is connected with “anger.” There are times and places when we should be angry, but James warns us not to get angry too quickly. Again, what an important word this is for our times. It seems as if anger, along with fear, is the emotion of the day.  Such, however, is not the mark of a pure and undefiled religion before God. With this in mind, perhaps we could stop for a moment and listen to the other, so we might understand each other. After we do the listening, and understanding, then we can speak. That’s not easy for some of us, who have a lot to say about a lot of things. While this may be true, we would be wise to slow down and let the other person speak first. We even might learn something important! Not only that, if we listen before we speak, anger might not get a foot in the door. After all, as James puts it: “your anger does not produce God’s righteousness.”

So here we are, sitting in church on a beautiful Labor Day Sunday. We’ve heard a word about a form of the Christian faith that is demonstrated by one’s works. Yes, what better way to celebrate Labor Day than to declare that work is good! With this word we begin our journey through James, who wants us to consider carefully the question: What does it mean to live the Christian life?