Come on Over - A Lectionary Reflection for Easter 6C (Acts 16) 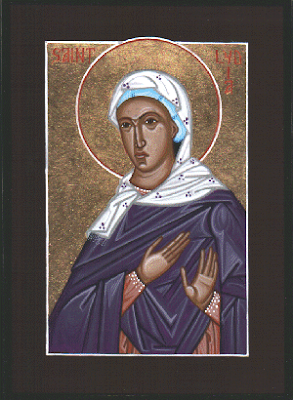 9 During the night Paul had a vision: there stood a man of Macedonia pleading with him and saying, “Come over to Macedonia and help us.” 10 When he had seen the vision, we immediately tried to cross over to Macedonia, being convinced that God had called us to proclaim the good news to them.

11 We set sail from Troas and took a straight course to Samothrace, the following day to Neapolis, 12 and from there to Philippi, which is a leading city of the district of Macedonia and a Roman colony. We remained in this city for some days. 13 On the sabbath day we went outside the gate by the river, where we supposed there was a place of prayer; and we sat down and spoke to the women who had gathered there. 14 A certain woman named Lydia, a worshiper of God, was listening to us; she was from the city of Thyatira and a dealer in purple cloth. The Lord opened her heart to listen eagerly to what was said by Paul. 15 When she and her household were baptized, she urged us, saying, “If you have judged me to be faithful to the Lord, come and stay at my home.” And she prevailed upon us.

The story found in the book of Acts begins with a commission in Acts 1:8. That commission involves proclaiming the Gospel in the power of the Holy Spirit, beginning in Jerusalem, and from there, moving outward through Judea and Samaria to the ends of the earth. The movement forward comes in fits and starts and requires guidance and regular nudges on the part of the Spirit. In Acts 9, Paul, the persecutor of the church, is called to preach, with Gentiles as his target audience. Then, in Acts 11, Peter defends his decision to go to the home of Cornelius, opening up the church to Gentiles, without qualification. That is, he baptized them without first requiring the males to be circumcised. In this action, the path forward that Paul would take is set. During this Easter season, where we focus on readings from the Book of Acts in place of the regular readings from the Hebrew Bible, the lectionary jumps from the story of Peter’s visit to Cornelius to Paul’s call to preach in Macedonia. There’s a lot of territory that is traversed between Acts 11 and Acts 16, one of which is the commissioning of Paul to take up his missionary journeys. Another event is the Jerusalem Council, at which time Paul and Barnabas explain their mission and make peace with the Jerusalem leaders on what is to be required of the new Gentile converts. When we come to Acts 16, Paul has headed out on his second missionary journey. He and Barnabas have parted ways, and Paul is joined by first Silas and then Timothy.

The lectionary reading for the Sixth Sunday of Easter (Year C) begins in verse 9 of chapter 16. If we go back a few verses, we learn that Paul had been forbidden to preach in Asia. Paul and his companions had been attempting to go to Bithynia, but “the Spirit of Jesus did not allow them,” so they went down to Troas. That’s where we pick things up.

Now before we get to verse 9 of chapter 16, we should take note of the message that in the Book of Acts, the Spirit is the driving force in the emerging mission of the church. In this case, the Spirit is specifically linked to Jesus. It is the Spirit of Jesus who is guiding this next step in the church’s mission, and the Spirit has a specific vision of where things should go.

When we come to verse 9, we find Paul in Troas, on the Aegean coast. He’s sleeping, not knowing what he is supposed to do. He’s been prevented from going where he intended to go, so where to next? As he slept, he had a vision—God often speaks to people in visions in Acts, sometimes they come when people are awake and sometimes when they’re asleep. In this vision a “man of Macedonia,” speaks to Paul, saying “Come on over to Macedonia.” To this point, Paul’s ministry had been focused on “Asia,” what we would call today Anatolia or Turkey. In the story being told by Luke, the Spirit is ready to move into a new field and to cross into Macedonia would mean crossing into Europe. So, things are moving forward, toward that goal of reaching the ends of the earth.

With this vision of the “man from Macedonia” calling Paul to come on over as their guide, the missionary group sets sail from Troas and heads for Samothrace, Neapolis, and finally to Philippi, which, according to Luke, was the “chief city of Macedonia” and a Roman colony. The reference to Philippi being a Roman colony suggests that it is a rather recently planted city, having been settled—or in this case probably re-settled—by Roman soldiers and their families. Here’s where things get interesting. Since it was Paul’s custom, as a Christian who also was a Jew, to worship on the Sabbath, he went looking for a gathering of Jews to pray with. Normally, that would involve looking for the local synagogue. That proved difficult in Philippi because there was no synagogue. What Paul did find was a gathering of women, who had gone down to the river outside the gates of the city to pray. As was his custom as well, he not only prayed with them, but he shared the Gospel with them. Among this group of women was a “worshipper of God” named Lydia. The reference to her being a worshipper of God, or God-fearer, like Cornelius, suggests that she was likely not Jewish, but one who embraced Judaism without fully converting. She was also a successful businesswoman. We’re told that she sold purple cloth, which was expensive. It was the kind of cloth used to make clothes for the wealthy and privileged. It was to this group of women, that Paul preached. They responded positively so that Paul baptized them.

Having heard Paul preach, and having been baptized by him (along with what may have been her household), he extends to him an offer of hospitality. She says to him: “If you have judged me to be faithful to the Lord, come and stay at my home.” Paul couldn’t say no. He took up her offer, gratefully, I would expect.

Often, we think of the early Christians as being poor and marginalized. Often, they were, but not all of them. In fact, we see in the Corinthian letter signs of socio-economic divisions. Such was not the case here. Lydia was likely rather wealthy, but she used her wealth in this case to benefit the ministry of Paul.  In other words, she became a partner in that ministry. The other element of this story is the fact that Paul was willing to worship with and share the message with women. We know that Paul could write instructions for women to be silent. He could also proclaim that in Christ there is neither male nor female (Gal. 3:28). In this case, we see Paul expanding the circle to include not only Gentiles but women, who become partners in ministry.

So begins Paul’s ministry in Europe. “A man from Macedonia” invited him over to help them, but it was a woman from Thyatira, who was staying in Philippi, who would be the first person to receive the Gospel. It’s a bit like Mary Magdalene, who is the first to receive the message of the resurrection (Jn 20). And, as Alice Connors notes, regarding Lydia, “there are no heroic deeds attributed to Lydia, no wrestling an angel to receive a blessing. She went about her life, praying and listening, selling and leading” [Connor, Fierce, p. 162]. Yes, she went about her life, in fairly normal fashion, but as she did, she became a leader in the church as it spread into Europe.  All of this began in the waters of baptism, which in the book of Acts are transformative. This was true of Cornelius and his household. It was also true of Lydia and her household. So, “shall we gather at the river, where bright angel feet have trod, with its crystal tide forever flowing by the throne of God?” [Robert Lowry in Chalice Hymnal, p. 701].