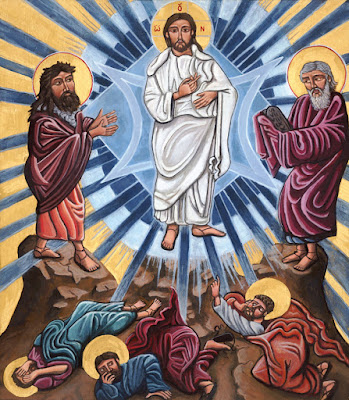 
The season of Epiphany begins with a star guiding the Magi to the home of the Holy Family. It closes with Jesus standing on a mountain, his glory revealed to his disciples, and his mission confirmed by a voice from heaven. As we gather here on Transfiguration Sunday, we’re invited to consider the question: Who is this Jesus?

According to Matthew Jesus ascended the Mount of Transfiguration in the company of Peter, James, and John. When they reached the summit, Jesus was transfigured, so that  “his face shone like the sun, and his clothes became dazzling white.” Then they were met by Moses and Elijah. Even though Peter had proclaimed Jesus to be the messiah and Son of God only a few days earlier, he and his colleagues were overwhelmed by this sight. Then to top it off, a voice from heaven called out: “This is my Son, the Beloved, with him I am well pleased; listen to him” (Matt 17:1-8, Matt 16:16).

This morning we encounter an abridged version of the Transfiguration story in the reading from 2 Peter.  While this letter may have been written long after the death of Simon Peter, it offers us a communal witness to a transformational moment in the ministry of Jesus.

The Transfiguration story invites us to reflect on the question of how Jesus embodies God’s light. Although St. Peter may not have written the letter, by referencing Peter’s presence in that moment, he assures us that the church’s proclamation of Jesus as the Christ is not based on a collection of “cleverly devised myths.” Instead, this witness is rooted in Scripture. More specifically, it’s rooted in the Old Testament, as it was translated into Greek. When it comes to interpreting this Scriptural witness, the author tells us that “no prophecy ever came by human will, but men and women moved by the Holy Spirit spoke from God.” Yes, these are sacred words that reveal God’s vision for creation, so we should read them with care, interpreting the message under the inspiration of the Spirit.

So what word does the author of 2 Peter want us to hear this morning? As I contemplated that question in preparing this message, I wondered what new word might emerge from this reading. I’ve preached my share of Transfiguration Sermons over the years, and I’ve tended to focus on how this moment of Transfiguration revealed the divine essence of Jesus’ person. But is there more to the story? Is there something else the author of this letter would have us hear?

In his commentary on 2 Peter, Richard Baukham provides us with an eschatological interpretation of this event. He suggests that in the moment of  Transfiguration, God enthroned Jesus as the eschatological king and judge. In other words, in this moment of revelation, we see an anticipation of God’s future for the world. In the Transfiguration, we see the dawning of a new day, when the morning star will rise in our hearts.

The future has been on my mind recently.  That might not be surprising since I announced my retirement plans at the beginning of the month. Even though we still have quite a few months left to do ministry together, I can’t help but think about the future.  It’s sort of like graduating from high school or college. You can’t help but wonder what lies ahead. I don’t dwell on the matter, but it’s there in the back of my mind.

This is also a political season, where candidates are vying for election to positions of leadership from city council and school board up to President of the United States. Elections have consequences, many of which are unforeseen.  While we can’t predict the future, we wonder about it. As we know, pollsters can get things wrong. Who knows, the Lions might even win a Super Bowl someday!

Then there is the book proposal that Ron Allen and I submitted to a publisher, which we’ve tentatively titled What About the End-Times? A Guide for Progressive Christians to the Many Ways Christians Interpret the Second Coming.  How do you like that title? We’re still waiting to hear about whether this is a go or not, which tells you that we don’t know the future!

Then there’s our congregation. What does the future hold for Central Woodward, both before and after I retire? Who might be the right fit to lead the congregation into a new future? How might we prepare for that future? I’ve suggested that we need to renovate the sanctuary with an unknown future in mind.  We’ve already laid some of the groundwork for the future when we decided to become an Open and Affirming Congregation. We’ve also laid some of the groundwork by co-hosting an annual Iftar Dinner with the Turkish American Society. We’ll gather for joint worship on Wednesday with Northminster and First Presbyterian Churches, which is part of a process of getting to know each other so we might work together in mission and ministry. These are but a few of the elements already in place, but there is still more to do. Yes, there is much to do to prepare for that moment when you cross the river into a new future, even as Cheryl and I cross over a different river into our own future.

Getting back to the witness of the Transfiguration, how does Jesus fit into our futures? How might he be the eschatological king and judge? How might we prepare to follow Jesus by attending to the “lamp shining in a dark place?”

It’s interesting that 2 Peter was written in the form of a testamentary letter or farewell discourse. If we go back a few verses, we’ll read Peter’s revelation that his death is near, “as indeed our Lord Jesus Christ has made clear to me.” He writes this so they’ll remember what he taught them  (2 Pet 1:14-15). He wants them to know that his message isn’t made up of  “cleverly devised myths” regarding “the power and coming of our Lord Jesus Christ” (vs. 16). Even if this isn’t a letter from the pen of the Apostle Peter, we’re to receive it as a trustworthy account passed down from Peter through his community to the recipients of the letter.

While we don’t talk very much about the second coming of Christ, which is why Ron and I decided to write a book on the subject, it’s clear that the author and his audience believed that Jesus would return in glory in the near future. Peter doesn’t give us a timetable, but he does encourage us to be awake to the possibility.

The first half of this morning’s reading speaks of the witness given to Jesus by “the Majestic Glory” in the moment of Transfiguration. Then it moves to a word about the reliability of Scripture. We may not have mountaintop experiences like the one Peter, James, and John had on the Mount of Transfiguration, but we do have the communal witness to that event, which has been passed down to us through the ages. This witness is affirmed in verse 19, where Peter writes about the prophetic word from heaven concerning Jesus: “You will do well to be attentive to this as to a lamp shining in a dark place until the day dawns and the morning star rises in your hearts.”  This word from God is a lamp that shines in the dark places of our lives, especially the mind. This lamp is Scripture, and according to 2 Peter, it will enlighten our hearts and minds until the day dawns and the morning star rises in our hearts. For Peter, that day is the day when Christ will return in glory, just as he was revealed in glory on the Mount of Transfiguration. In the meantime, we’re invited to walk in the Spirit, seeking the wisdom of God that’s revealed in Scripture.

In this eschatological moment, as we consider the witness of the Transfiguration to the person of Jesus, who embodies the light that is God, we can move forward in the knowledge that we are witnesses to the glory of God revealed to us in Jesus, our king and judge.

As we bring the season of light to a close and prepare for the coming of Lent, might we hear this word about the relationship of Epiphany to Lent. Bruce Epperly writes that “Epiphany is about abundance, Lent turns us toward simplicity. Yet, abundance and simplicity complement and inspire each other. Those who live by God’s abundance can live simply, so the planet might flourish.” As we walk in the Spirit, bearing witness to the message of Jesus, may we live in simplicity with God’s abundance, offering a word of hope and healing to all of creation.