The State of the Union – A Reflection 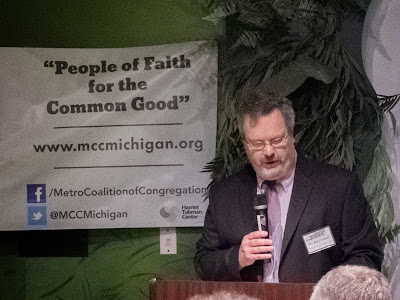 I have stayed fairly quiet in recent months on matters political, even though we are right in the midst of a political season. That is not because I’m not interested or not invested. I am both interested and invested. To be honest, I’ve not made up my mind about who I will support when Michigan holds its primary. By then we’ll have gone through Super Tuesday and we’ll likely know who has the upper hand in the Democratic field (my party affiliation).

One of the reasons why I’ve remained quiet is that there is so much noise out there that I’ve not felt as if my voice would add anything to the conversation. I’ve not felt as if I could help bring some clarity to the situation. I am profoundly disturbed by the current national political scene. We have a President who not only is breaking all norms but seems to delight in it. I didn’t have much hope for him going in and he’s shown himself to be even more narcissistic and dangerous than I could have imagined in 2016. The impeachment process ended as I feared, with the President feeling vindicated and free to do as he pleases. Whether the process was worth going through only time will tell, but unless the Democrats get their act together, he could end up back in the White House.

From a faith perspective, I do believe people of faith have a role to play in the public square. I've written a book that expresses that vision titled Faith in the Public Square. At the same time, there is the danger of getting sucked into what is often called the swamp of politics (I don't believe politics is necessarily dirty, but power does corrupt). Thus, I've written another book focusing on the Lord's Prayer that I've titled Ultimate Allegiance, which serves to remind us that before any political allegiance, there is a higher allegiance to the realm of God, where justice, mercy, and humility reign.

So, I’ve watched as a sizable portion of the Evangelical community has embraced this immoral and irreverent figure as their champion. The tragedy is that he is not the cause, but the symptom of something that runs deeper in our psyche. I believe that is rooted in fear. What produced him is fear of change, especially demographic change. The United States has never been a “Christian nation” in an official sense. However, from our earliest days, there has been a Protestant majority that has defined the nation’s identity, at least until recently. That is no longer true. For at least some in our midst, this is something to resist. That resistance is seen in anti-immigrant proclivities. We see it in anti-gay activities. We see it in Islamophobia and other forms of religious discrimination.

Many outside the Christian community look at this and assume that this represents the Christian faith. The alternative voices are not being heard. That includes those who live within the evangelical community who don’t back Trump and those of us outside that community (a community I once called home). There is another way, one that is just, is loving, and is humble. That path is not an easy one. It’s not a quick fix either. No politician is going to save us from ourselves.

One thing I do know is that while electing President is important, unless we pay attention to what happens locally, change will never come. It starts with city council and school board elections, county commissions and state legislatures. It involves voting for school bond measures and supporting cultural opportunities. Yes, electing a President is important but it is not the only thing.

As far as the faith community, it will take a concerted effort to change the conversation. I’ve tried in my preaching and writing and actions to exhibit a vision of justice and mercy and grace. I believe that for change to happen we’ll have to start at the local level. With the changing demographics of our communities that will require interreligious cooperation.

So, won't you join me in getting to know our neighbors and build from there?
Email Post
Labels: Common Good Donald Trump Elections Faith in the Public Square Inter-religious Cooperation politics Realm of God Reflections