The Church IS Open - A Response to the President's Order 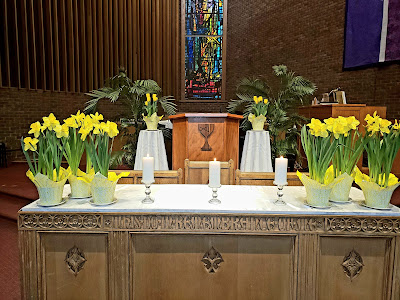 Yesterday President Trump ordered churches and other faith communities to open up because they are essential services. What he means by that I’m not sure. Does he mean we are important contributors to the economy? Are we adjuncts of the state? Then there is the question of authority—whether he has the power and authority to order faith communities to open up. Yes, governors in some states have ordered churches and other faith communities not to meet in-person because larger gatherings, especially religious gatherings, are often spreaders of the virus. Just think about what we do when we gather in person for worship. We sing, we speak, we may ingest some form of food (Communion elements and coffee hour), and we tend to hug or at least shake hands. It’s difficult to remain safe in the context of a church experience. So, even here in Michigan, where faith communities are exempt from the orders, most of us have been following the lead of our health authorities in the interest of the common good and greater health of the community.

Here’s the thing, the church never closed down. What is true of the church is true of our neighbors of other faith traditions. We may have ceased to hold in-person worship, fellowship, study, and meetings in our buildings, but that doesn’t mean we’ve not been meeting. We’ve been finding other ways of being together for worship—you can join me at 10:30 on my congregation’s Facebook page on Sunday for worship. We’re still praying, studying, and even holding church meetings (yes, church meetings have not ended). What about my neighbors? My Jewish friends didn’t abandon Passover in April? They just found other ways of celebrating (and the same is true for weekly sabbath services). My Muslim friends have been observing the holy month of Ramadan, a month of fasting, which is broken each evening with an Iftar meal (often at the mosque). Ramadan went on as scheduled, just prayers and meals had to be done at home with the immediate family, while inspirational messages were shared online. Holy Week and Easter were different this year, and it appears the same is true for Pentecost (a week from Sunday). Other faith traditions beyond these three have found safe ways of observing their traditions. Yes, we’re still open. Clergy are hard at work with their tasks. In fact, most of us have taken on new responsibilities we’d never imagined, like creating online worship, bible studies, and church meetings. Nothing has closed, we’re just doing things differently.

Do I wish we were gathering together in-person? Most definitely. And it’s not just for worship, it’s the full spectrum of the life of faith that we do together. If not for the virus, my congregation would have co-hosted with the Intercultural Association of Michigan an Iftar dinner, something we’ve been doing for more than four years. But, such an event wasn’t possible.

While I would love to get back to normal, there is a command of God that was first revealed in Leviticus and reaffirmed by Jesus in the Gospels. That command is to love my neighbor as myself. This isn’t about freedom of religion. No one has infringed on my ability to worship and serve God. Now, I will note here that I live in Michigan, which exempted faith communities from the rules (I won’t get into why that is true). Despite our exemption, we’ve been following the guidance offered by the state and local health officials. When we do regather, it will likely be in phases, starting with a small group. Right now, the standing rules in Michigan, just announced, allows for gatherings of ten people. I can see that happening in June, but even then, we’ll be practicing social distancing, wearing masks, washing our hands, and doing things differently. Meetings and studies at least for now will be online.

What we’re doing as a congregation is, I believe, an expression of the call to love our neighbors. It is, I believe, a positive witness to the God who is defined by love. It’s also a recognition that our congregations are filled with vulnerable people, and we don’t want to endanger them. At the end of the day, as an expression of love for God and neighbor, we are choosing to refrain from anything that might harm the community. What is true for us, is true, I believe, for the vast majority of faith communities. So, in response to the President, I will say thanks but no thanks! Though I think more tests would be helpful!

John said…
Jesus was clear that Sabbath was made for humans, not the other way around, and that arbitrarily imposed Sabbath rules, which cause injury or which undermines the health and well-being of the faithful, are not binding on the faithful. The Sabbath is to be observed in a safe, wholesome and generative manner which honors God and which nourishes the sacred relationship between the faithful and God.
11:16 AM

Jim Szabo said…
No disrespect intended, but you can’t fix STUPID, Mr. President. Aligning yourself with Churches in the name of God will not get you votes in the next election. His leadership is sad — as he attempts to grasp at “saving churches”. The Presidents image to be a Holy messenger is a joke. He is being transparent, but with little substance.

I agree with Pastor Cornwall, “Here’s the thing, the church never closed down. What is true of the church is true of our neighbors of other faith traditions. We may have ceased to hold in-person worship, fellowship, study, and meetings in our buildings, but that doesn’t mean we’ve not been meeting. We’ve been finding other ways of being together for worship—you can join me at 10:30 on my congregation’s Facebook page on Sunday for worship.”

There are so many comforting words from scripture and hymns that give me cause and faith to know that Central Woodward is doing well, and in good hands. “Blessed be the tie that binds, our HEARTS in CHRISTIAN LOVE..... the fellowship of kindred minds is like to that ABOVE.” : )
— Jim Szabo, Cadillac, MI. ✝️
11:28 PM