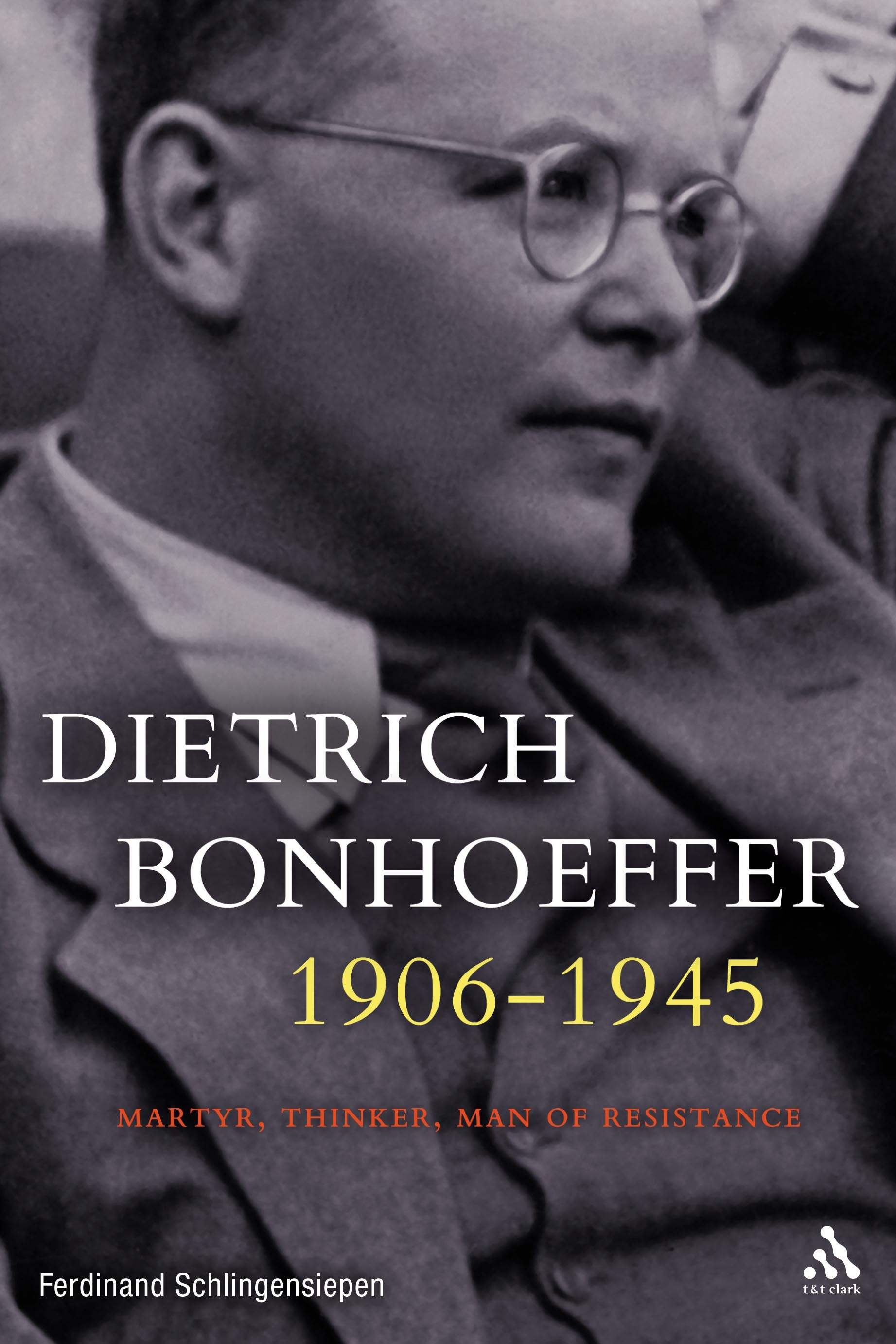 Dietrich Bonhoeffer has become an almost mythical being. His death at the hands of Nazi thugs has proven to be so inspirational that everyone wants to claim him as their own. Therefore, Death of God theologians of the 1960s could build a theology on Bonhoeffer’s theological musings about a “religionless Christianity” and a world “come of age.” On the other hand, radical antiabortionists have claimed his mantle and appealed to his involvement in the plot against Hitler as a rationale for their acts of violence directed at abortion clinics and their personnel. There is also the recent attempt by a biographer of Bonhoeffer to turn him into an American Evangelical. Yes, Bonhoeffer has become of the great modern saints, standing alongside Mother Teresa and Martin Luther King, Jr.


Bonhoeffer’s life story and his theology are much more complex than any of these attempts to use his legacy would suggest. When you consider that he died at the age of 39, you can only wonder where his life and his theology would have gone had he lived a full life. This is especially true of this theology, which seems to have been bursting with new ideas in the closing years of his life, years spent in prison. All that we can do is speculate on where these threads might lead. There is, of course, there is sufficient material available that suggest that Bonhoeffer was on the verge of becoming one of the great and most creative theologians of the modern age. He interacted closely with theologians and biblical scholars such as Barth, Tillich, Harnack, Bultmann, and Niebuhr, and he left us with tantalizing clues to his agendas and concerns, clues that have proven fruitful for theological reflection since his death.  Indeed, because he did not live long enough to complete his own theological journey, posterity has tried to pull the threads in directions that have gone in many directions, both right and left.  One wonders where he would have taken his theology, especially in light of his interest in a "religionless Christianity" and his ponderings of what theology would look like in a world "come of age."


The most important custodian of Bonhoeffer’s legacy has been his close friend and former student at the Finkenwalde Seminary, Eberhard Bethge. Bethge gathered together and published many of Bonhoeffer’s unpublished works, and wrote what has been to this point the most definitive biography, but the time has come for a new definitive biography. Ferdinand Schlingensiepen has written a full, fair, respectful, and theologically sophisticated assessment of his life. The author is a theologian who has deep regard for Bonhoeffer and his legacy, having been a founder of the International Bonhoeffer Society, and was a close friend of Eberhard Bethge. What stands out from this book is the author’s seemingly intentional decision not to claim Bonhoeffer for any particular contemporary ideological party or movement, but instead seeks to reveal to us in great detail the complexity that was Bonhoeffer’s life.


Schlingensiepen’s biography rests deeply in the collected works of Bonhoeffer, which are now largely available in English translation. He has made good use of these writings to give us a picture of Bonhoeffer’s life story, including his social and familial context, his travels to places as diverse as Rome, Mexico, London, and New York, as well as ministries with German churches in Barcelona and London, his deep involvement with the Ecumenical Movement, his involvement with and frustration with the Confessing Church, and his own complex theology that was forged in difficult times. We learn about a man who had deeply held pacifist views, who struggled with what to do with the requirement for military service (there was in Nazi Germany no room for conscientious objectors) and yet decided to join in the conspiracy against Hitler.
The Bonhoeffer who emerges from this biography is both a deeply rooted German and yet a man of the world. He was the product of an elite upper middle class family, with his mother, the daughter of a pastor, providing his initial religious instruction, though the family was by and large not particularly religious. His neighbors included figures such as Adolph Von Harnack, who would be one of his teachers at the University of Berlin.
Theologically, Bonhoeffer was his own man. Although attracted to Karl Barth’s theology, Bonhoeffer chose not to study with Barth, and ultimately he chose to take things in his own direction. Inspired by his visit to Rome, he chose to study ecclesiology, as is seen in his doctoral dissertation Sanctorum Communio

. Later he would write practical theological texts that emerged from the church struggle and his need to provide resources for his students. His involvement in the struggle against Hitler would define his theological work, including his Ethics,

while prison allowed him to look into the future and wonder where theology might go once the war was over and people began to recognize that the old ways had died with him.


Many Americans know of Bonhoeffer’s visits to the United States, including a final visit that could have saved his life, had he chosen to remain in America. But while he was fascinated by life in the United States, he found the American church and American theology frustrating and even shallow. While he held the African-American church in high regard, found Americans, both liberal and conservative, lacking in theological acumen, with little interest in questions of dogmatics.  Of course, his own theology had been forged in the church struggle against the Nazi movement, and he acutely understood that a rich theology was needed if the church was to survive the Nazi encroachment, which he believed was imposing a foreign ideology on the church that had nothing to do with Jesus Christ.


Bonhoeffer’s decision to join the resistance movement, which led ultimately to his execution even as American artillery was heard in the background, emerged from his theology and his deep love of Germany. Although many Germans would view him as a traitor, even after the war, he acted out of his desire to participate in the rebuilding of Germany. He used his ecumenical contacts in an unsuccessful effort to reach out to the Allies, in the hope that they would spare Germany a punishing blow, if only Hitler could be removed. This effort required him to pretend to support the war effort and even make the Hitler salute, so as to cover his activities. Once he was imprisoned, he devoted his life to theological exploration and ministry to his fellow prisoners. The closing weeks of his life are known to us only through the stories told by survivors, but these stories prove poignant as they are retold in this book. One of the stories is that Bonhoeffer continued working on a now lost theological manuscript up until the day of his death. We have an outline, which suggests that he was in the midst of a deeply creative theological moment, one that would have offered us a revolutionary turn in Christian theology for a world “come of age.”

Although the book concludes with an epilogue that speaks of how news of Bonhoeffer's death became known to the outside world, the final paragraph is brief and pointed.  In part this is because there is little information that is available from those final days.  What we know from official records is laid out accordingly:

During the morning hours of 9 April, Wilhelm Canaris, Hans Oster, his colleagues Theodor Strunk and Ludwig Gehre, Karl Sack and Dietrich Bonhoeffer were hanged and cremated.  Friederich von Rabenau was to follow them a few days later.  Their ashes, together with those of many thousands of other victims of Hitler's regime, form the now grass-grown pyramid in the middle of the former concentration camp at Flossenburg (p. 378).

In a footnote to the book (p. 406), Schlingensiepen dispenses with the oft told story about Bonhoeffer's last day, wherein he supposedly was seen in in his cell by an SS doctor kneeling at prayer.  The author notes taht this story is a fabrication as the doctor in question would not have had access to the cell, nor would he have seen Bonhoeffer offering prayers before mounting stairs to the gallows as there were no stairs.  Indeed, this doctor's duty was keeping prisoners alive so as to prolong their agony.
Bonhoeffer is in the eyes of many a martyr, but it is unlikely that he would have seen himself in that light.  After all, besides Dietrich Bonhoeffer, one of his brothers and two brothers-in-law were also executed as a result of their involvement in the conspiracy against Hitler.  He did what he believed he had to do, and he died like so many others because he dared to oppose an evil regime.


This isn’t a quick read, but neither is it a ponderous one.  It's neither  a hagiography nor the remaking of  a life for ideological purposes.  It is a book written by one who is deeply devoted to the legacy of a man who has impacted the lives of so many in the years following his death at such a young age.  Therefore, it requires of us deep thought and reflection.  Even as it demythologizes the man, by bringing his life into clearer focus, it reveals to us a person whose life and work shines even brighter as the mythological layers are removed.

Anyone wishing to know Bonhoeffer’s story or needing a context in which to read Bonhoeffer’s collected works will find in this book much food for thought and reflection.  My only suggestion is that it be read with John Moses’ The Reluctant Revolutionary

, (Bergahn Books, 2009), which gives greater attention than does this biography to the way in which Bonhoeffer challenged the ideological roots of German nationalism and anti-Semitism in ways that were ahead of their time.  He also goes into greater depth than does Schlingensiepen in laying out Bonhoeffer's post-war reception, especially in Germany, where he was considered by many a traitor to his nation for his participation in the attempt to overthrow Hitler.   His light shined brighter earlier outside of Germany than inside.   Read together, however, the reader will get a full-orbed picture of one of the most intriguing figures of modern history and modern theology.
Email Post
Labels: Adolph Von Harnack Biography Dietrich Bonhoeffer German Theology Martyrdom Reviews Theology

Adam Shields said…
Is Reluctant Revolutionary really that good? It is $83 on Amazon!
8:50 AM

Robert Cornwall said…
Adam,
It is expensive, but I think it is one of the most helpful takes on Bonhoeffer I've read. If cost is prohibitive, see if you can't get it through interlibrary loan. I think it will pay dividends!
9:02 AM

Thank you for your comments on Scot McKnight's blog this morning, as well as the in-depth review of Schlingensiepen's biography here at your blog.
9:38 AM